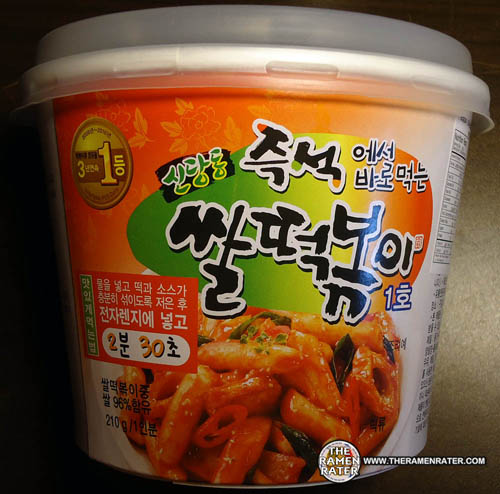 While at the KS Mart in Lynnwood, Washington, I saw this and had to give it a try. Wasn’t sure what (if any) noodles would be within, although I know one thing: topokki (or ttebokki) are really neat – they’re like enormous noodle chunks. Korean food is awesome stuff. Here’s what Wikipedia says about how it arrived in its current form:

Following the Korean War a new type of tteokbokki became very popular. While the older version was a savory dish, this latter type was much spicier, and quickly became more popular than the older traditional dish. In addition to traditional ingredients, this tteokbokki used gochujang, a fermented, spicy paste made from chilli peppers, along with fish cakes. Other ingredients added to tteokbokki include boiled eggs, pan-fried mandu (Korean dumplings), sausages, ramyeon (which then becomes rabokki/labokki 라볶이), a variety of fried vegetables, and cheese. These days, many kinds of tteokbokki are popular such as seafood tteokbokki(해물 떡볶이) or rice tteokbokki(쌀떡볶이). Flour tteokbokki was popular in early days, but rice tteokbokki is more popular these days.

Sindang-dong in Seoul, where tteokbokki was first sold, is still very famous for the dish and treated as the mekkah of tteokbokki. Since Tteokbokki has become one of the most popular dishes, one will easily find a place to enjoy eating Tteokbokki in Korea.

Check out the full Wikipedia article here. Now, let’s open this thing up! 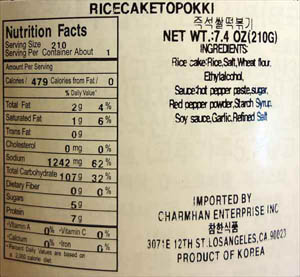 Here’s the importer’s sticker (click to enlarge). Ethyl alcohol? Yep – you definitely smell it when its cooking in the microwave. 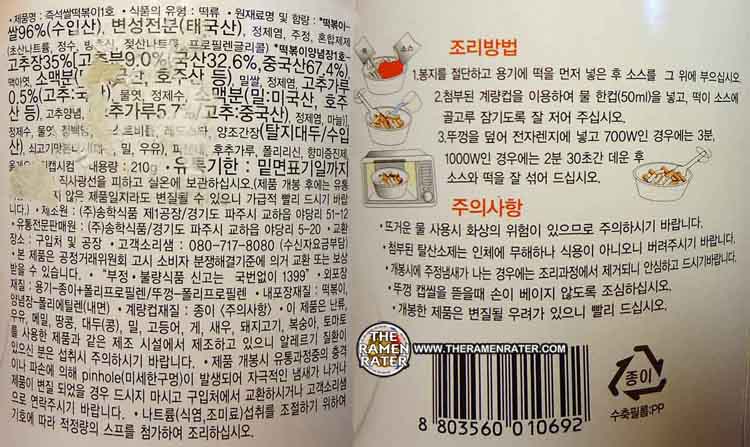 Here are the side panels (click to enlarge). The sticker was hard to remove – my apologies.

Hey! A new included fork for the Included Forks page! 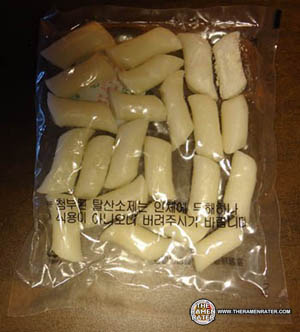 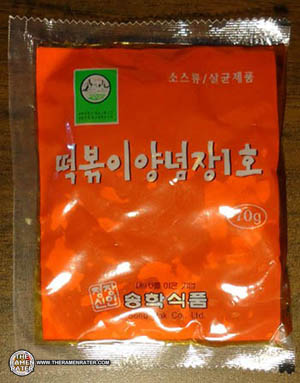 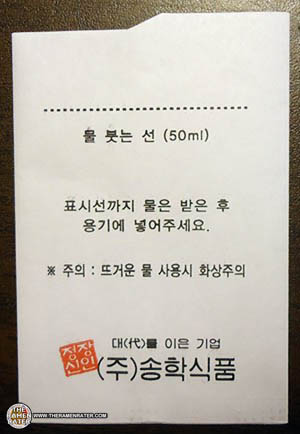 Hey what is this? I’m taking a shot in the dark here, but I think what you do is open it and pour water into it up to the line. This one’s going to be a real crap-shoot as far as figuring out how it is prepared, but here’s my guess: empty everything into the bowl as well as 50ml of water. Microwave for 2 1/2 minutes. Hope for good results… 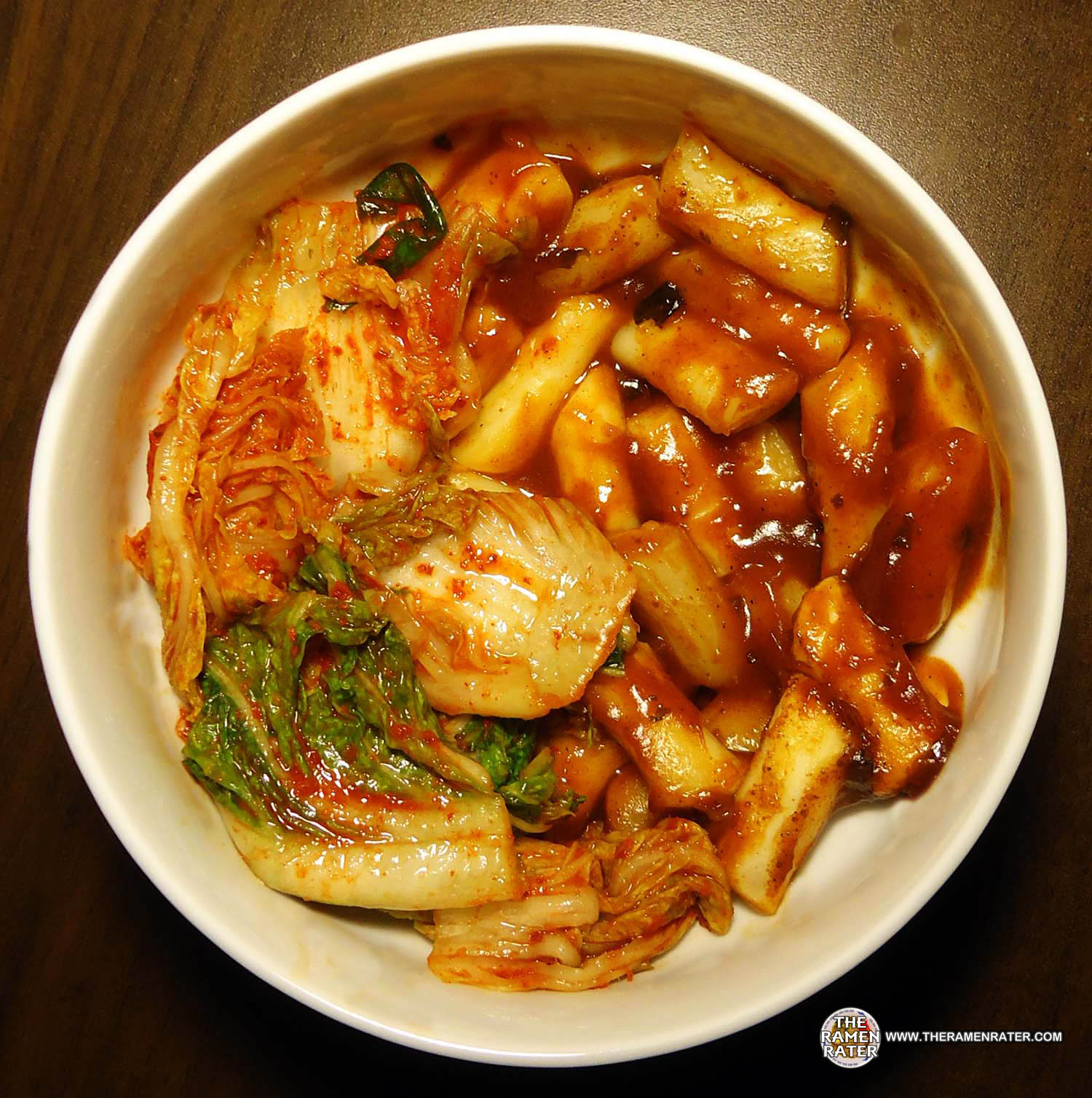 Finished (click image to enlarge). I decided to pair it with some of the kimchi I also got at KS Mart in Lynnwood, Washington. I know, it’s a little greenish still – it was very fresh and it’s not completely ripe yet… I have trouble resisting the kimchi. Speaking of kimchi, my 7 year old boy HATES the stuff. But he’s awesome so here’s a link to his blog, Andy’s LEGO Stuff. So the stuff on the right – that’s the topokki. The topokki is chewy and hearty and enjoyable! The flavor is wonderful – spicy like gochujang and has just the right spices and stuff; kind of reminds me of canned ravioli sauce but spicy and a ton better. This should replace anything remotely like Spaghetti-O’s on your shelf if you can find it! This is some tasty and really spicy stuff! Yeeow! 5.0 out of 5.0 stars – pure tasty awesomeness in a very simple form.n UPC bar code 8803560010692 .

You know, every day that I realize that there hasn’t been a huge explosion of Korean and Indonesian restaurants in this country it saddens me a little more. I’m so lucky to live in an area that has a rich ethnic population and a lot of Asian groceries!

This guy’s gotta be happy going to school there! Wow!