Here we go with another Meet The Manufacturer week! This one’s a little different of course since my wife and I actually took a trip and met the people who are Nongshim America! It was an amazing and fun visit – so without further adieu, here’s what happened. By the way, if you click on the images they get much bigger.

We got up very early in the morning and rode down to Seatac Airport. Was hard to get much sleep the nights before – really excited about this! I mean, going to an instant noodle plant? Come on! First we got our boarding passes, then of course an easy go through the security checkpoint and then onto the plane. I should mention that I have a horrible time with flights usually – my ears pop and it’s quite painful and usually I can’t hear much for the rest of the day. Well, my wife found these great things called ‘EarPlanes‘ that are like earplugs that keep your ears from popping in-flight. Awesome! Made the trip much more enjoyable!

Wow – two and a half hours later and we’re in Ontario, California! The climate is completely different – very flat, very dry, very warm and lots of palm trees! We were picked up at the airport by Ray Adams, the General Affairs Manager of Nongshim America. I spoke with him on numerous occasions before the trip about what we’d be doing and how everything would happen. Was really good to meet him in person!

Then we arrived at the plant. This place was really big! We went upstairs and were greeted by this sign! Certainly made us feel very welcome. 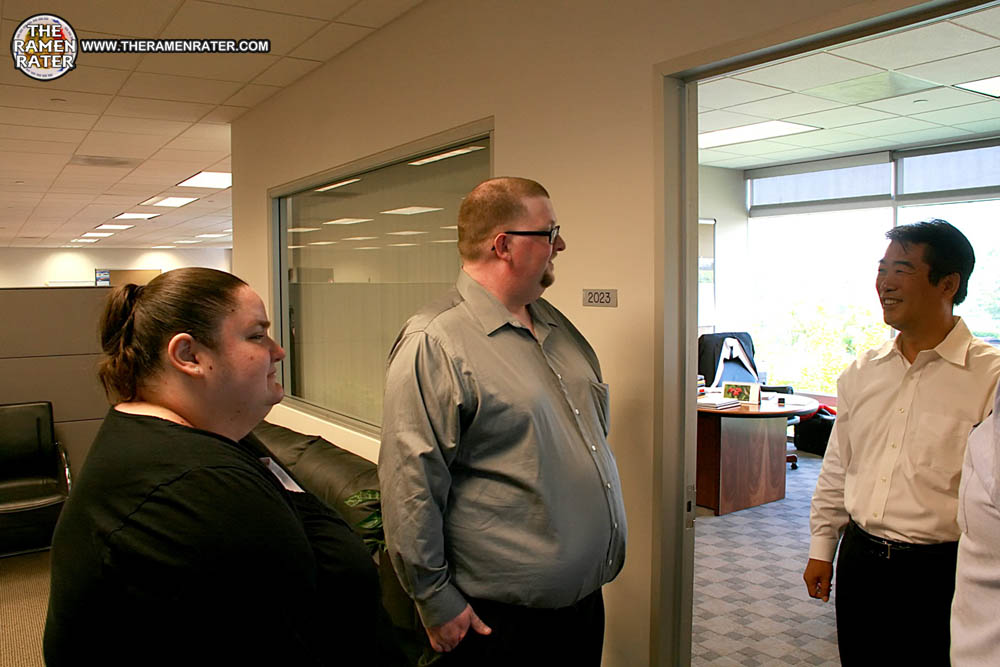 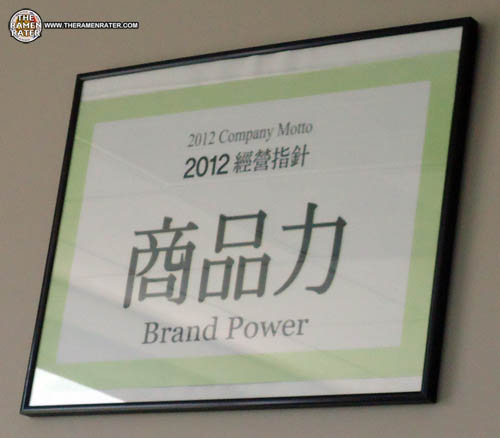 We spent a little time in the VIP Lounge to have something to drink and a quick bite. Ray told us all about how things get done at Nongshim Anerica. The way they do things is by having everyone on the same page – so for example, to approve my trip down to meet everyone and do a plant tour, a proposal was written and it went to everyone in every single department and them approved by the Presidents. Basically it’s a good way to keep from the ‘one hand doesn’t know what the other’s doing’ kind of thing. I also noticed that all the departments were very close to eachother marketing is footsteps away from sales, etcetera. It seems like a really good way of doing things to me. The sign above with the company’s motto is in english, Korean and Chinese – the languages spoken where Nongshim has factories.

Next, we headed down the stairs again to tour the plant. First thing we did was put on dust jackets, hairnets and beard-nets.  Then we went through an ‘air shower;’ a little room that blows air at you to remove any dust. Then a hand washing station, and into the corridor where the tour took place. Ray told us that the facility was built in such a way that tours could take place easily, so people could see how noodles are made! The corridor has all these windows to look in on the process. First, the ingredients are combined and a thick sheet of noodle dough comes out. Then, the dough is cut into noodles. From there, they get cooked, cooled, dropped into bowls with the seasoning packet and veggies, the covers put on, shrink-wrapped and finally put into boxes. From raw ingredients to finished product, it takes thirty minutes to make a bowl of noodles. One thing that was interesting is that Nongshim has its own division in Korea that makes equipment that does this – I found out that they also sell it to other noodle manufacturers. So they don’t only make their noodles, but their equipment makes noodles for other companies.

We found out that people who have different duties in the plant have different colored hats – For example, QC folks have yellow hats. This makes it a lot easier for people to find each other. The center picture is one I though people reading the blog would find exceptionally interesting. Guess what’s in the big yellow totes? Seasoning packets! Ray said they hold 15,000 of them! You could season a lot of noodles with that! At the end, we got to see the warehouse. Each one of those boxes look to be holding Bowl Noodles of different varieties. The Bowl Noodles boxes hold 12 bowls. Needless to saw, I think there’s one zillion Bowl Noodles in there! If your would like to go on a plant tour, you can! Check out the Plant Tour section of Nongshim America’s website.

Next stop was the Research & Development department. This was really great! Got to try Nongshim Jinjja Jinjja Ramyun for the first time – awesome! Also got to try three new things that are in development. I can’t really talk about them as they’re not available yet, but they were good! They asked me all sorts of questions about what I thought of the new products and I was happy to give my opinions. Never thought that being The Ramen Rater might actually have an impact on how a company makes it noodles! Quite an honor.

After the plant tour, we went out to lunch and then returned to do a planned interview. What wasn’t planned was that a TV crew from KBS (the biggest Korean TV station) wanted to come and do an interview – with me. When it comes out, I’ll definitely post a link. After that, we had out interview. I had a list of questions that I asked and got very good, long answers that you’ll get to hear and see when the video of that interview comes out as well! Very excited about both of the interviews. The photo in the center is of (from left to right) my wife Kit, myself, Ray Kim, General Manager of Nongshim America, and Ray Adams. It was the end of the day for us at Nongshim America and time to head to San Diego.

We thought that flying us down and back for a plant tour was very kind, but Nongshim also wanted to have us enjoy a nice little vacation. They put us up in a very nice hotel that was connected to Petco Park, where we got to see a Padres vs Dodgers game! Conversation always came back to instant noodles – a subject I could talk about for hours on end – and I did! Unfortunately, the Dodgers creamed the Padres – if you didn’t know, my wife and I are Giants fans and Giants are behind the dodgers right now in our division, so a Padres win would’ve been nice. Was a great time in the park!

The next day, we went to SeaWorld with Ray Adams and his family – was a great time! 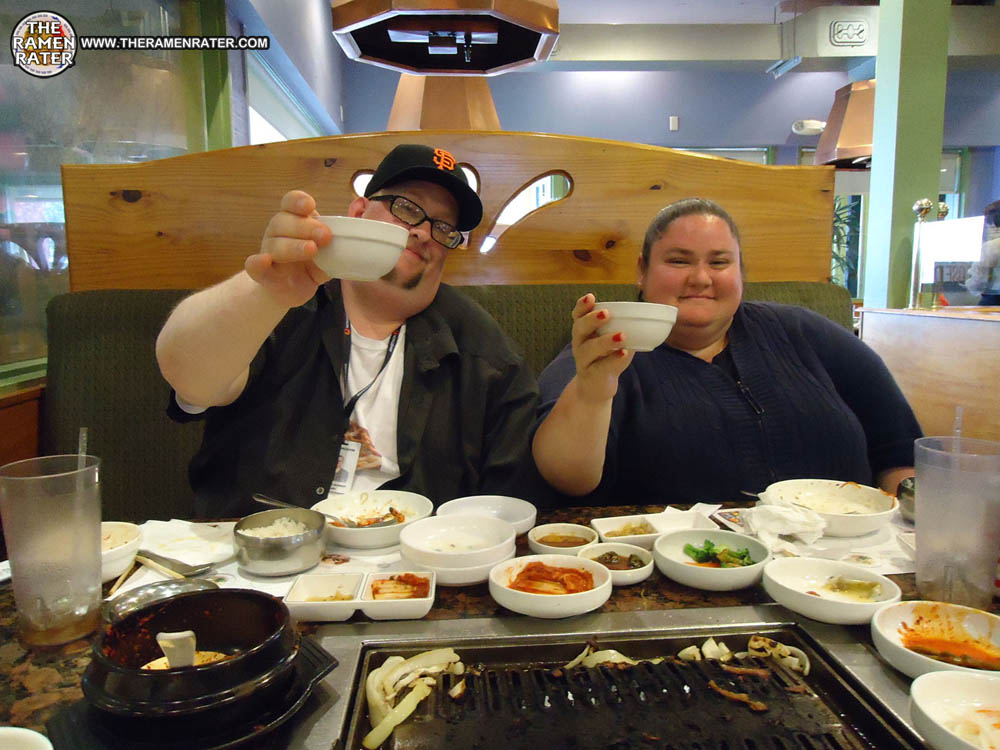 After SeaWorld, we all went out to colossal Korean BBQ at a place called Buga. If you haven’t tried Korean BBQ, you really should – the little dishes are called banchan – the smells and different flavors are really quite amazing. After dinner, we went back to the hotel. Said our goodbyes to Ray Adams and took a short walk around the Gaslamp Quarter. Then to bed for an early flight home. 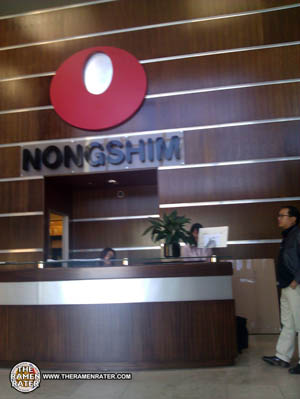 I want to thank everyone at Nongshim America who made this happen; we aren’t wealthy and this was a trip we couldn’t have normally done. It was really amazing to see how all aspects of a company can come together to form not so much a list of employees and bosses, but a real feeling of family. I think a lot of companies could learn a lot from your example.