Welcome to another Meet The Manufacturer! This time, I am happy to present Samyang Foods (삼양식품) of South Korea. 2013 is a special year for Samyang Foods as they’re celebrating their 50th anniversary. Not only that, but it’s the 50th anniversary or instant Ramyun being sold in South Korea. If you’re like me and really enjoy South Korean Ramyun, this is indeed something to celebrate! With that, here’s my interview with the leader of the Samyang Foods Public Relations Team,  Nam-Seog Choi.

THE RAMEN RATER> Hello and thank you for giving us the opportunity to learn more about Samyang Foods! To begin, can you tell us about your company – when was Samyang Foods founded, where and by whom?

SAMYANG FOODS> Samyang Foods was founded by Joong-Yoon Chun on September of 1961. Samyangfoods started to produce ramyun in 1963. In the 1960s, after the Korean war had been over, Koreans were barely able to get food to eat. In this poor and hungry period, Samyang Foods’ original CEO, Joong-Yoon Chun, was shocked to see almost every Korean suffering from lack of food. He decided to quit his CEO job at an insurance company at that time and develop substitutional foods by founding food company. He recalled he had a chance to eat ramen when he visited Japan and had a thought: Ramen could be the only way to solve the biggest problem which was a shortage of foods. He had hard time borrowing 50 thousand dollars but finally he could be successful in making ‘Samyang Ramyun.’

TRR> I have heard that this is the 50th anniversary of instant ramyun in south Korea – Was Samyang the first available?

1) Mini Ramyun
In 1967, Samyang Foods launched downsized ramyun which was called ‘Mini ramyun’ for people who eat less than other people and people who need to carry portable foods for travel. 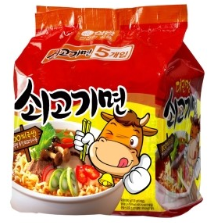 2) Root of Bundled Ramyun
Nowadays, people can easily get a bundle of 4-6 ramyun in a pack.
In November 1970, Samyang Foods produced 5 beef flavor ramyun in a big package at consumers’ request. At that time an increasing number of food systems cooked ramyun and they felt taking off plastic wrapping was time-consuming.

3) Cup (Bowl) Ramyun
In March 1972, Samyang Foods launched Cup Ramyun. (In Korea, people actually do not differentiate between Bowl Ramyun and Cup Ramyun. They just call everything big cup ramyun or small cup ramyun.)
Nissin  was the first company which developed cup ramyun in the world in 1971 and Samyang Foods introduced it in 1972.

* Kalgugsu Ramyun
In July 1968, Samyang Foods developed instant Kalgugsu. People loved light, fresh, and simple flavor of Non-frying Kalgugsu and it sold about 4.5 million units for a half year. 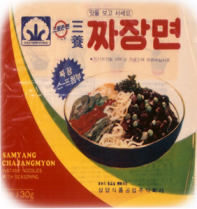 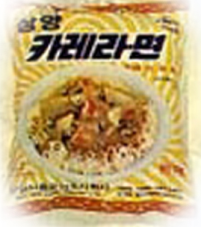 * Curry Ramyun
In 1970, Samyangfoods put a lot of efforts to meet consumers’ various preference and developed lots of different kinds of ramyun.

*  Rice Ramyun
In December 1989, Samyang Foods developed Rice Ramyun which noodle has 30% of rice mixed. It was high in nutrients and had a clean and light taste.

TRR> Are there going to be any special events commemorating the 50th anniversary?

SF> There are some under contemplation. 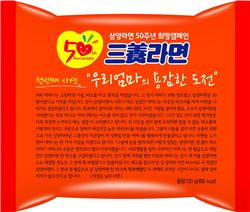 TRR> For those who are not familiar with your product line, can you tell us a little about the products you offer?

TRR> What does the name ‘Samyang’ mean?

TRR> What was your first product?

SF> The first product of Samyang Foods was Samyang Ramyun,released in 1963. 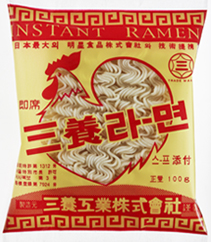 This picture on the left side is the first package of Samyang Ramyun which is the first ramyun in Korea. It was produced in 1963 and tasted like chicken soup. Samyang Foods introduced ramyun to Korea from Japan so the first version of Samyang Ramyun was made to suit Japanese tastes which are light. However, Samyang Foods adjusted it to beef flavor, suiting Korean’s taste which is deep and rich.
However, at the first time ramyun was introduced to Korea, people misunderstood that ramyun was a kind of textile because Koreans call cotton ‘myun’ and didn’t even try to buy one. To make them understand ramyun is a kind of food, Samyang Foods started a free sample stand and it worked. People began to love ramyun and consume ramyun a lot.

TRR>  You make a broad range of flavors of instant noodles – are there any new varieties that will be released in the United States and abroad soon?

SF> Sadly, no. There is not any decided plan yet.

TRR> I often am asked if I am worried about sodium levels in all the different instant noodles from around the world I review. How would you recommend people balance their enjoyment of instant noodles and keeping them as part of a healthy meal?

SF> You can simply adjust the amount of water you put to boil ramyun! If you want to adjust sodium levels, you don’t want to finish the soup.

TRR> Is Samyang involved in charity in the local community around you?

SF> Yes, it is. Samyang Foods contributes to the local community with Beautifulstore.  (You can get some information about this store here: http://www.beautifulstore.org/Eng/)

TRR> How many packs, cups and bowls of instant noodles do you make in a year?

TRR> Any plans to build a factory in the United States?

SF> There is no plan yet.

TRR> Finally, when you yourself enjoy ramyun, what do you add to it to make it extra special?

SF> I like to add kimchi or fresh vegetables.

TRR> Thank you for this chance for my readers and myself to learn more about Samyang Foods! Happy 50th Anniversary!

SF>Thank you for interviewing Samyang Foods!

There you have it! I’d like to thank Samyang Foods’ Public Relations Team Leader Nam-Seog Choi for doing this interview and Sookkyung Lee for translating the interview as well as supplying instruction on how to cook samples in English.