UPDATED REVIEW – uses a recipe from EatYourKimchi.com! See it HERE! 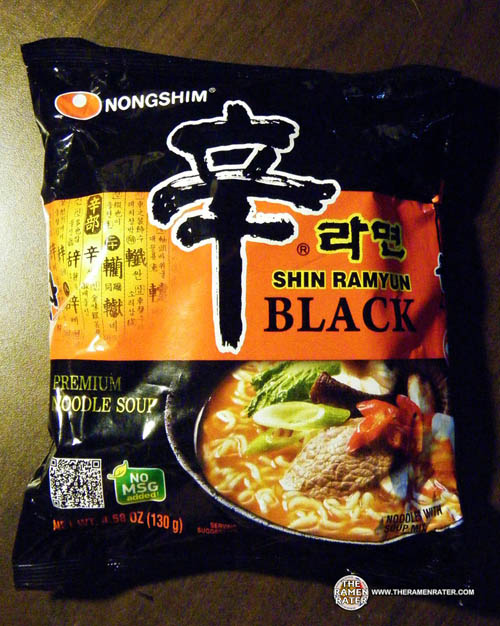 First off, I want to thank Greg B. of Florida for sending this one in. Shin Ramyun Black  – wow. So I should mention about the ‘ controversy in South Korea about this product. Nong Shim advertised that it had more nutritional value than it really did and was fined for misleading advertising ( Korean Herald article here ). It was extremely popular and I believe it still is. It costs much more than regular Shin Ramyun too. I’ll have to say that I’ve been waiting for just the right day to review this one! Let’s see what’s inside this interesting package of South Korean instant noodles! 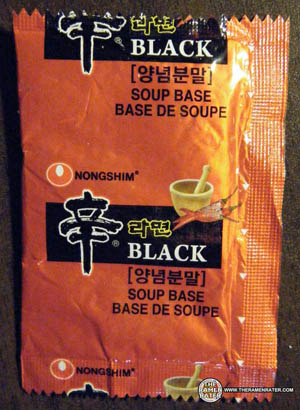 We have three packets, starting first with our standard red soup base packet. I’m imagining that it’s full of the angry, spicy red powder we’re all used to from Shin Ramyun. 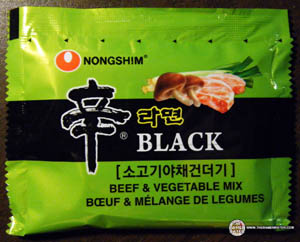 Moving right along, we come to the beef and vegetable mix packet. Bigger than most veggie packets, I read on the ingredients panel that there is freeze dried beef in here. 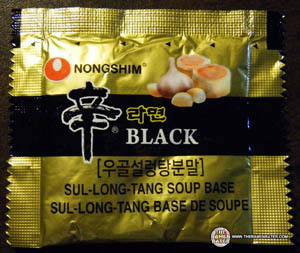 Finally, the Sul-Long-Tang soup base packet. Looks like onions and oxtails in the image. 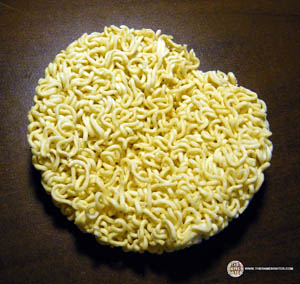 I thought a picture of the noodle block would be fitting here. The center of the round noodle block has a bit of a dent in it. This is where two eggs will nestle and boil with everything else. 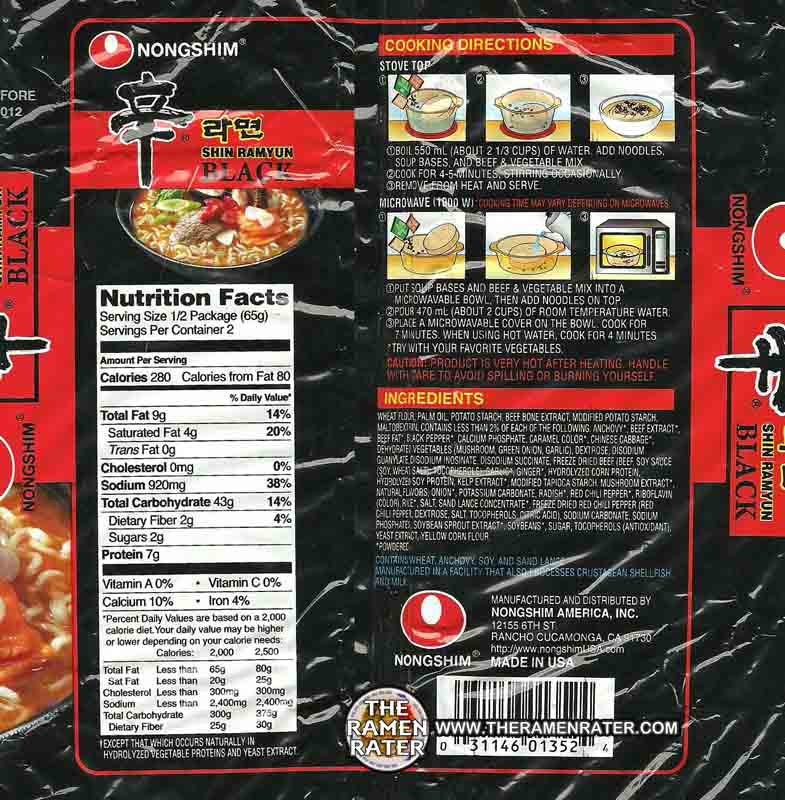 Click image to enlarge. Here’s a picture of the back of the packaging with all ingredients and directions. 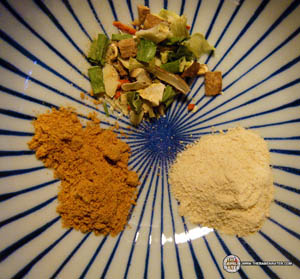 The ingredients in the bowl as I wait for the water to boil. At the top is the veggies and beef, lower right, the reddish soup base packet’s contents, and finally we have the oxtail and onion packet contents. Once the 2 1/3 cups (550mL) of water is boiling, everything goes in for 4-5 minutes. 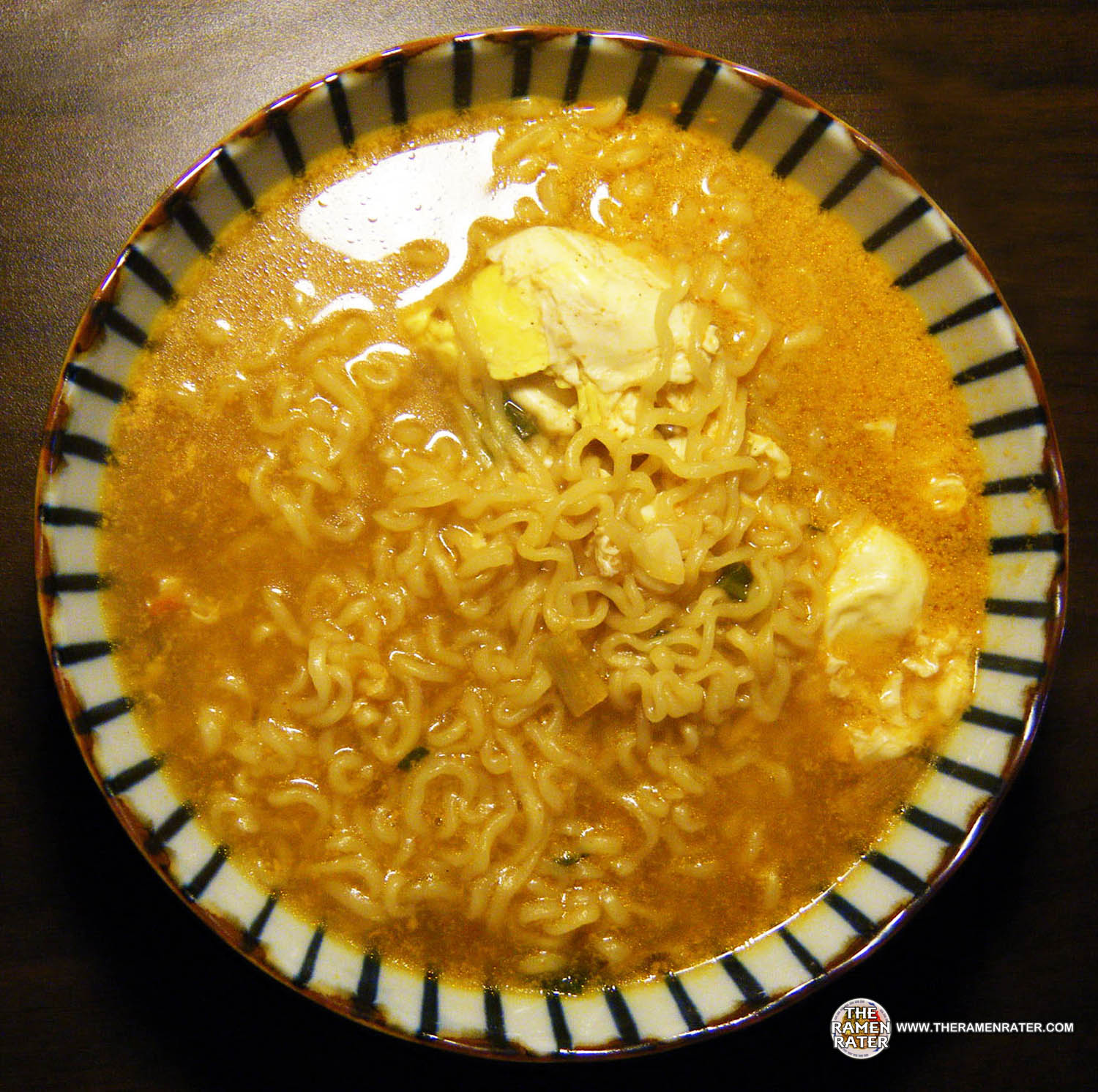 Finished (click image to enlarge). Now let’s get down to business. As mentioned before, I added two eggs that cooked in the pot with the noodles. This is pretty standard. The noodles are of a good quality. They are chewy but not overly so. There is also a happy abundance of noodles, making for a decent sized meal. The broth is fine –  nice spiciness that you would expect from Shin Ramyun but it has an added depth and richness. I taste a lot of onion, garlic and meaty tones. As for the veggies and beef, I think that’s where this bowl shines. The beef is excellent – like little pieces of steak amongst the noodles – chewy and they taste fresh and good. The vegetables re-hydrate very nicely – and they aren’t tiny little bits! They’re of a decent size and of good quality. Long story short, I would happily say that this is one of the better South Korean instant noodles I’ve tried, possibly ranking up in the top two or three. I will say I like it better than the original Nong Shim Shin Ramyun as well. I’m giving this one 4.75 out of 5.0 stars. Why not 5.0 stars? Well, I would have liked a little more of the beef![AMAZONPRODUCTS asin=”B0061JW7I2″]

Here’s a commercial for this stuff – you can see they’re going for a ‘classy’ kind of feel with this.