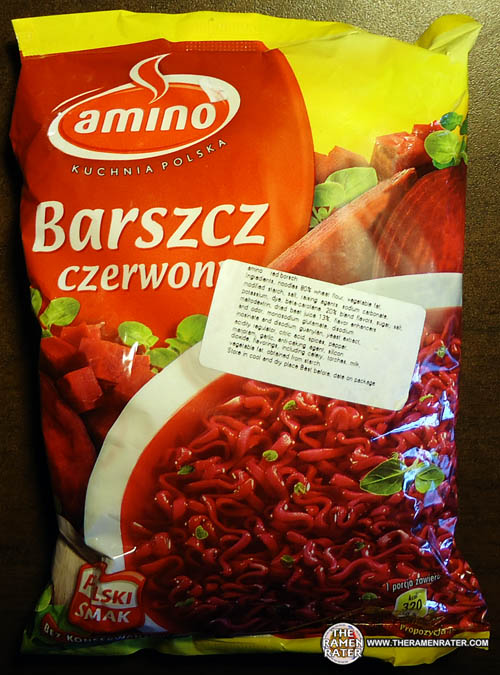 Here’s the last of the varieties from Poland that were kindly sent by Joe & Gil of the UK! Borscht! I’ve never actually had real borscht before, but I read up on it on the Wikipedia page:

Borscht (also borsch, bortsch, borstch, borsh, borshch; Ukrainian: борщ) is a soup of Ukrainian[1] origin that is popular in many Eastern and Central European countries. In most of these countries, it is made with beetroot as the main ingredient,[2][3] giving it a deep reddish-purple color. In some countries, tomato is used as the main ingredient, while beetroot acts as a secondary ingredient. Other, non-beet varieties also exist, such as the tomato paste-based orange borscht and green borscht (sorrel soup). While the original Ukrainian name does not end with a “t”, a final t was added when the word was borrowed into Yiddish. The word was borrowed into English from Yiddish, not Ukrainian or Russian.[4]

What I’m having today is a Polish version and here’s what it has to say about that:

The basic Polish borscht (barszcz) recipe includes red beetroot, onions, garlic, and other vegetables, such as carrots and celery or root parsley. The ingredients are cooked for some time together to produce a clear broth (when strained), and the soup is then served as boullion in cups or in other ways. Some recipes include bacon, as well, which gives the soup a distinctive “smoky” taste.

Other versions are richer and include meat and cut vegetables of various kinds, with beetroot not necessarily dominating (though this soup is not always called barszcz, but rather beetroot soup). This variation of barszcz is not strained, and the vegetable contents are left in. Such soup can constitute the main course of a Polish obiad (the main meal eaten in the early afternoon).

Barszcz in its strictly vegetarian version is the first course during the Christmas Eve feast, served with ravioli-type dumplings called uszka (lit. “little ears”) with mushroom filling (sauerkraut can be used, as well, again depending on the family tradition). Typically, this version does not include any meat ingredients, although some variants do.

The beet basis is not required. There is a sour rye soup called żurek; the wheat-flour-based variant of this soup is called barszcz biały (“white barszcz”), made from a base of fermented wheat, usually added to a broth of boiled white fresh sausage (kiełbasa). It is served hot with cubed rye bread and diced hard-boiled eggs added to the broth, and horseradish is often added to taste.

A key component to the taste of barszcz is acidity. While it can be made easily within a few hours by simply cooking the ingredients and adding vinegar, lemon juice, or citric acid, the traditional way is to prepare barszcz several days in advance and to allow it to naturally sour. Depending on the technique, the level of acidity required, and the ingredients available, barszcz takes three to seven days to prepare in this way. 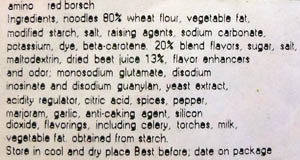 Hey wait a minute. On this distrubotr’s sticker, we have the ingredients – one of which is interestingly enough ‘torches.’ If anyone has any idea what this could b, send along a message and I’ll add it in here. 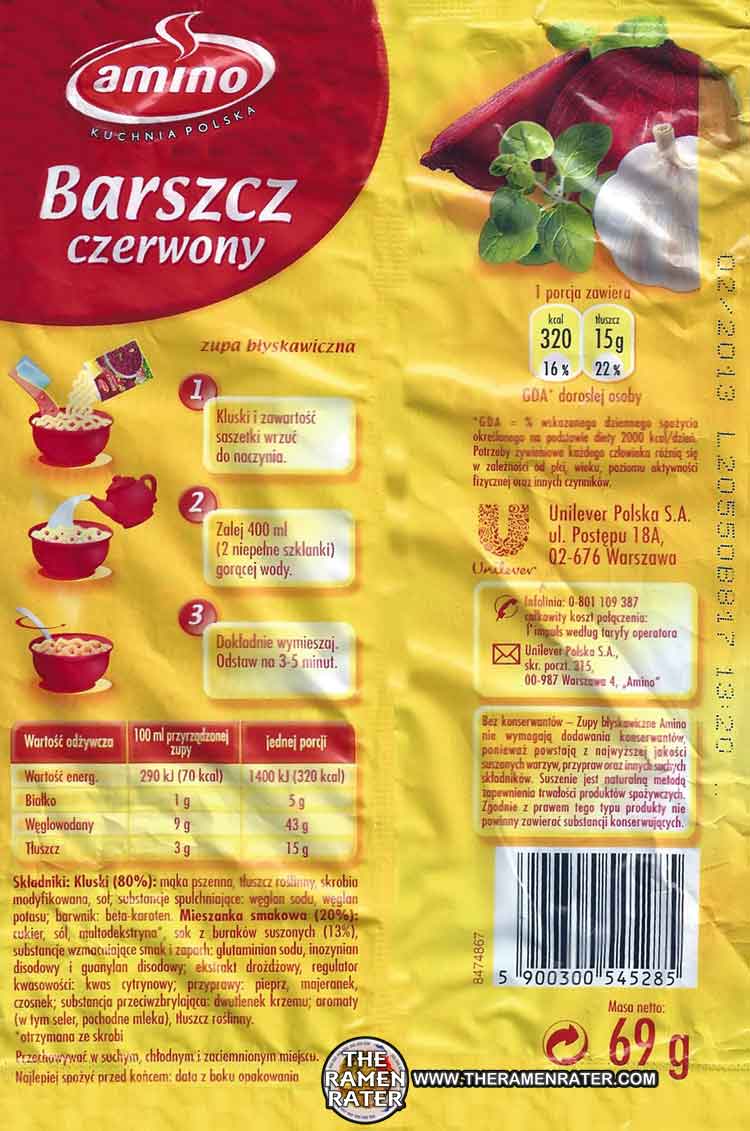 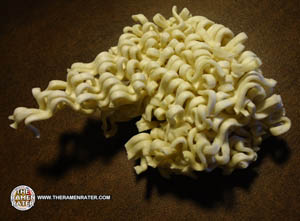 The noodle block has been a little beaten up – here’s some of it. 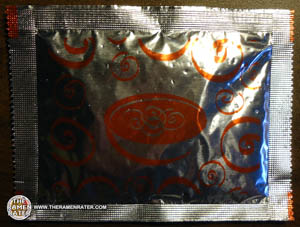 As with the other Amino varieties, one big packet. 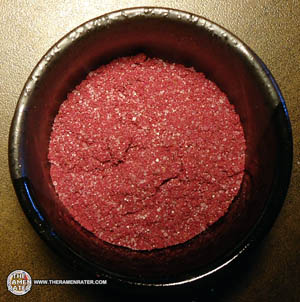 Wow look at that color – beets! 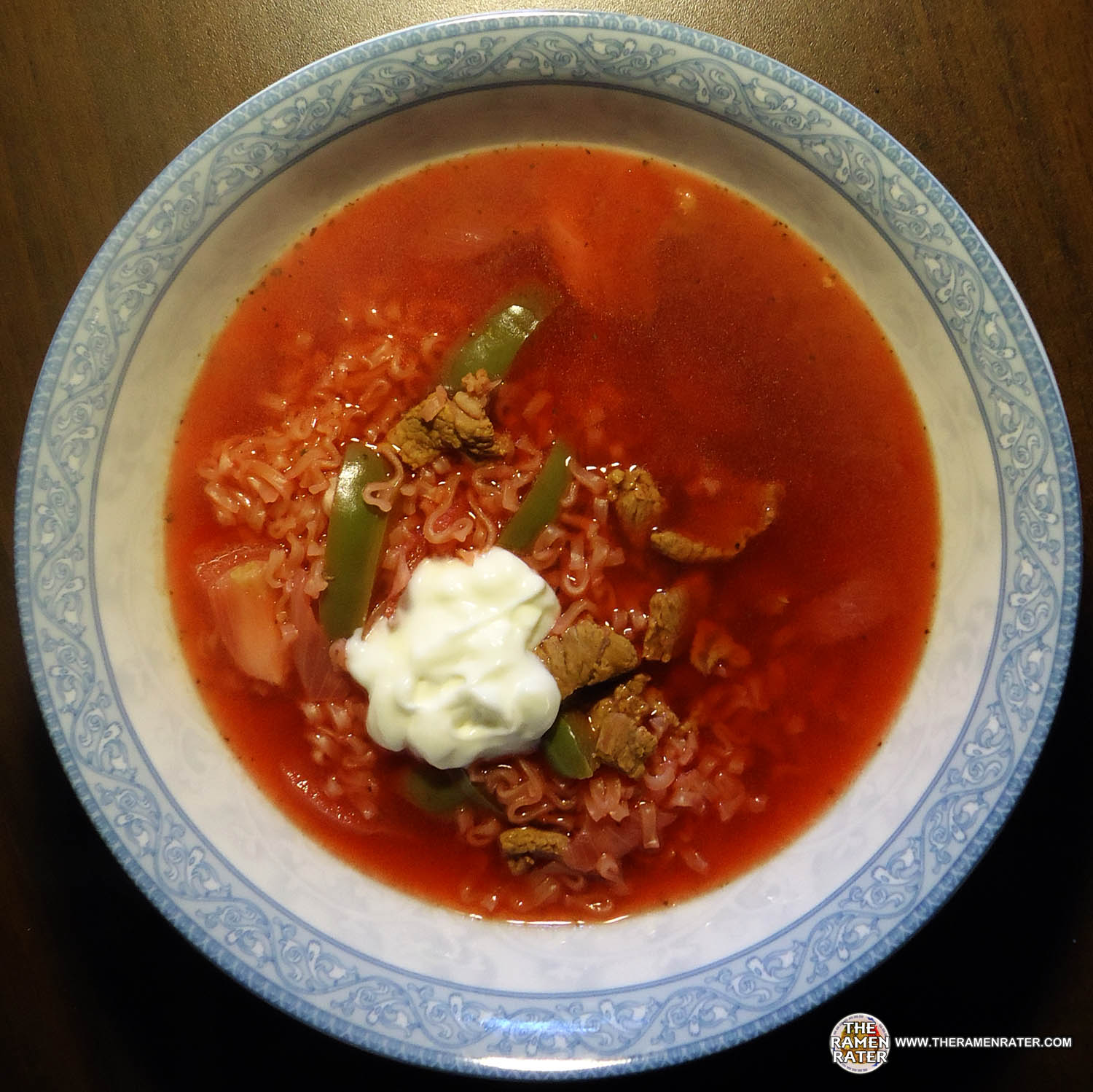 Finished (click image to enlarge). Added beef, onions, green bell pepper and sour cream. The noodles are pretty standard – slightly broader and plumper than most. The broth is quite interesting. It is very deep in color and has a nice tomato and beet flavor with a light smokiness. This is really good stuff – 4.0 out of 5.0 stars.UPC bar code 5900300545285.