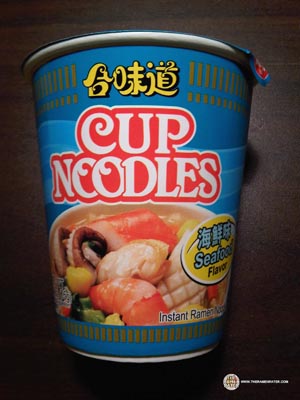 I’ve seen a few articles as of late about people burning themselves because they tip over cups of instant noodles. This is ridiculous. These articles start citing that the design of these cup is flawed. Also, it is mentioned that many of the victims are children! I think anyone saying “here little tyke, be careful, it’s hot” ought to have their heads examined. . If you don’t know how to correctly operate and consume a cup noodle, I will herein inform you as to how.

The first rule of the cup noodle is follow the directions. Most people don’t read directions when making a cup noodle, but most of them have them. Nowhere does it say to fill it with water then put it in the microwave for a few minutes; in fact, there are little icons warning against doing exactly that. Microwaving cup noodles can cause super-heating of the contents as well as can release chemicals from the foam. Note, the cups are made from foam, not Styrofoam which is a trademarked material. 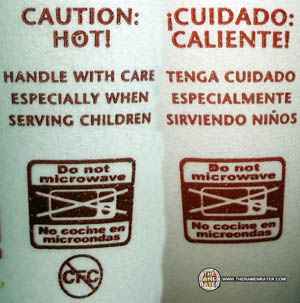 Most cup noodles direct you to heat water in a separate container in the microwave and then pour it in and close the lid. Is there a difference in the taste? Sure! Would you microwave spaghetti noodles and expect them to taste good? Of course not; you’d do what it says on the packaging.

Now for the tipping issue. I’ve had a lot of instant noodles in my day. Bowls, bags, cups, big bowls and king cups. Have I ever tipped one over? No. Have I ever knocked one over? Yes. Something tipping over on its own and being knocked over by me are two distinctly different things altogether. It isn’t a design flaw. I had a stage when I was in my teem years when I would knock over everything that had liquid in it on myself. At McDonald’s I knocked a large Coke on myself. At a pizza joint, I knocked a banana malt all over my shorts. Was it lame? Yes. Was it my fault? Sure was. Was it the fault of the design of the beverage receptacle? Not really. How could it be?

The flaw, especially when it comes to kids getting burned, is the parent letting them get burned. Come on, parent – don’t be a lazy hooplehead!

I am willing to take all responsibility for my own actions and as of this moment, openly  apologize to myself for all accidents involving cup noodles that get knocked or ‘tipped’ over by me in times previous and future. I’ve never heard anyone complain about those long-neck beer bottles being elbowed – granted they don’t contain hot liquid, but they’re easily knocked over.

In closing, read the directions and while the noodles steep, let them sit in a safe place. Watch yourself and be careful! Contents may be hot.

15 thoughts on “Tipping Point: Is There Really A Danger From Cup Noodles?”