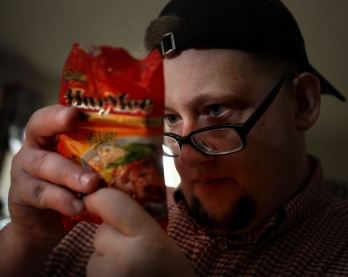 The Three Rules of the Instant Noodle

1 – Treat noodles not as crackers or Shredded Wheat; don’t crush them and make it into baby food.

2 – Spruce them up when at all possible

3 – Revere them for their oddities and ingenuity at all times.

I try my best to cook the noodles as directed on the packaging. I also try to never crush the block of noodles. I don’t know why, but that just seems a little lame to me; I can’t do chopsticks but I can manage a fork. Little rice-length pulverized bits of noodles are disgusting and don’t hold their shape for long. I like to let the noodles in a cup noodle cool a little longer than the packaging mentions though. I also like to remove the lid entirely and put a record or a CD on top of the cup noodle as to cover it completely. Call me weird, I don’t mind. I like to make the least amount of damage occur where the packaging is concerned when removing the block and packets from it – I save them in an album.

If I am adding something like beef or chicken, I like to boil it along with the noodles – so I will cut the meat in very thin strips as to not require much cook time.

Here are some of the things I like to add to my noodles. Got any ideas? Post them!

What is furikake? Traditionally, it’s a seasoning for rice that hails from Japan. I found that I like Ajishima Kim Chi furikake a lot with Korean noodles – there are bits of kim chi, seaweed, salt, sesame seeds and other little tasties that make a little sprinkle on top nice. They make a ton of different varieties – probably going to try the ‘Shio’ flavor next.

These are awesome and tasty – especially on top of the Indonesian stuff.

So I like to add green onions to my ramen sometimes. Usually when its a noodle that’s thin and doesn’t have a very complicated soup.

This stuff is really good when paired with eggs on certain instant noodles. It’s got a crisp, sharp taste of ginger and a really nice color. This is pickled ginger – but the pink bitgs and not the lighter sliced sweet kind for your sushi. You can find it here.

I have created a link with what this stuff is and how to use it – check it out here.

Here are some of my favorites:

Melinda’s Garlic Habanero Hot Sauce – This one was my favorite of all the hot sauces I reviewed when I was The Sauce Rater. Worth getting and enjoying!

Tabasco Buffalo Style Hot Sauce – This one was nice as it had a richness I didn’t expect. Slightly buttery and goes great if you like eggs on top of your noodles.

So I really like to add a couple eggs to my noodles when they’re the first meal of my day. I like them either fried or in with the noodles – let me explain…

Fried – I fry them in a little oll for a minute or two, remove them from heat and put a lid on them. I also tend to use a fork to get them to take up a little less space and look nicer when in with some ramen noodles.Here’s a prime example where a broth is involved.

Cooked In With The Noodles – So the other way I do up my eggs is by simply dropping them into the water and noodles as they cook. I have seen this done often in Korean instant noodle preparation. What is nice about it is it really enhances the broth and the noodles. I’ll drop an egg in halfway through the cooking process and after a couple minute take everything over to my bowl and stir things up. If everything goes as planned, the yolk will be still kind of runny while the whites are all done. I like to break the yolk open and dip a forkful of noodles into it and eat a bit of it that way – nice and hearty.

I also like to fry eggs and scramble them in the pan. They’re still fried but not all completely mixed. I’ve done this for years but people kind of think it’s weird. I dunno – I like it.

There are a few seasonings I’ve always enjoyed and use often. Here’s a list:

Salt & Pepper – you know these I’m sure.

Lindberg-Snider Porterhouse and Roast Seasoning – a lot of sage in it and other herbs – goes quite well on chicken!

Lindberg-Snider Red Baron BBQ Seasoning – This stuff is great – has a little curry and corn meal in it!

Those link to where you can find em’ on Amazon but you can usually find them in your grocery store.

89 thoughts on “HOW I EAT MY NOODLES”