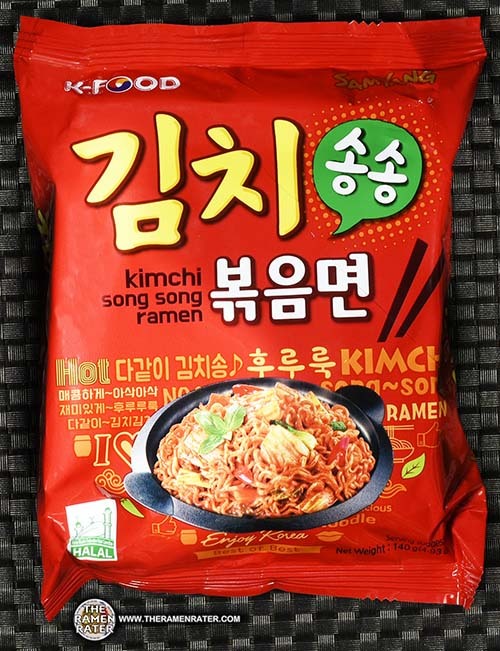 Today we have Song Song Kimchi Ramen. Kimchi varieties out of South Korea are among my favorites. I really like the tangy as well as bright, spicy flavors. Kimchi is interesting; it’s cabbage as well as many other ingredients that is allowed to ferment for an amount of time. 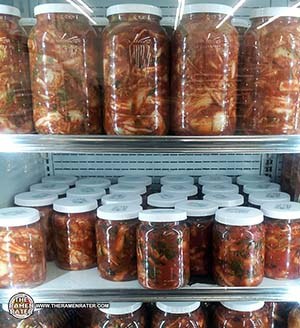 Personally, I really like kimchi. Here’s a pic from a local Korean grocery store – they make huge amounts of kimchi in store. We saw them doing it one time a few years back and it’s a serious operation. I’ve introduced kimchi to friends and family in the past with mixed results. My son Andy really doesn’t like it – he tried it when he was around 6 or 7 years old and got the most disgusted look on his face. I opened a jar for my friend Matt B. to give it a try and he literally freaked out and almost ran out of our apartment.

I’ve felt that I’ve had a more adventurous palate than most. The more exotic, the better. Food is a language in which we can learn so much about the daily lives of people from around the world – better to embrace it – whatever we are used to.

It’s not a too distant cousin of sauerkraut, but different. It is said to have some important health benefits. Let’s see what Wikipedia has to say about kimchi –

Kimchi is a traditional Korean dish consisting of pickled vegetables, which is mainly served as a side dish with every meal, but also can be served as a main dish.[47] Kimchi is mainly recognized as a spicy fermented cabbage dish globally, but there are currently more than 200 variations, and continues to grow.[48] These variations of kimchi continues to grow, and the taste can vary depending on the region and season [49]

Kimchi has been a staple in Korean culture, but historical versions were not a spicy dish.[50] Theories of the origin of Kimchi varies including a belief that it appeared during the Shilla Dynasty, and became prevalent once Buddhism caught on throughout the nation and fostered a vegetarian lifestyle.[51] However, the addition of spicy peppers to this cultural dish did not appear until the arrival of Portuguese missionaries in the 1700s who brought chili peppers.[52] The pickling of vegetables was an ideal method, prior to refrigerators, that helped to preserve the lifespan of foods. In Korea, kimchi was made during the winter by fermenting vegetables, and burying it in the ground in traditional brown ceramic pots, and further allowed a bonding between women within the family.[53]

So this Song Song Kimchi Ramen is a little different – it is a broth-free variety. I did look up ‘Song Song’ and tried to figure out what it means but with no luck. However, I asked Samyang Foods – here’s what they had to say:

I’ll answer the question about ‘Song Song’ meaning.
The word ‘Song Song’ we use is not the Song Dynasty regarding a family name.
It’s a Korean word that means chopping into small pieces.
We use it as an adverb(mimetic word).
For example, Korean can use Song song like this.
chop scallions into small pieces.= Scallions Song Song. 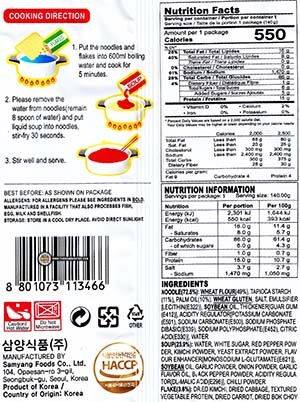 Here’s the back of the package (click to enlarge). Looks to be meat free but check for yourself. To prepare, add noodles and flake into 600ml boiling water and cook for 5 minutes. Drain saving 8 spoons water (120ml). Add in liquid sachet and stir-fry for 30 seconds. Finally, stir and enjoy! 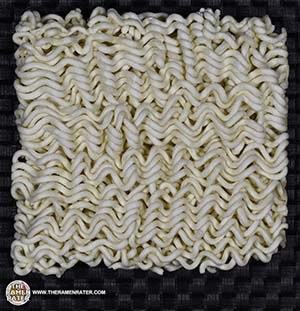 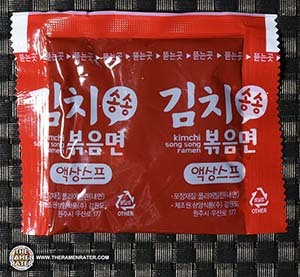 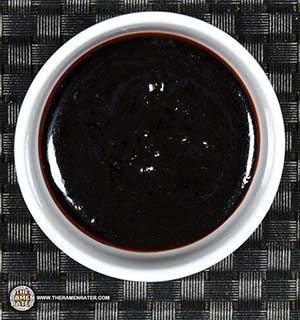 A spicy kimchi smell wafts from the cup. 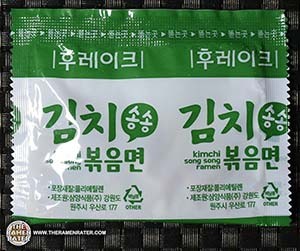 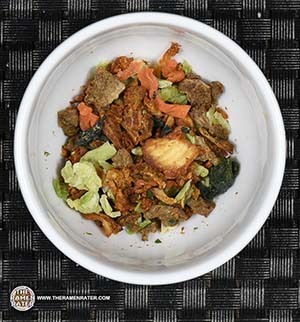 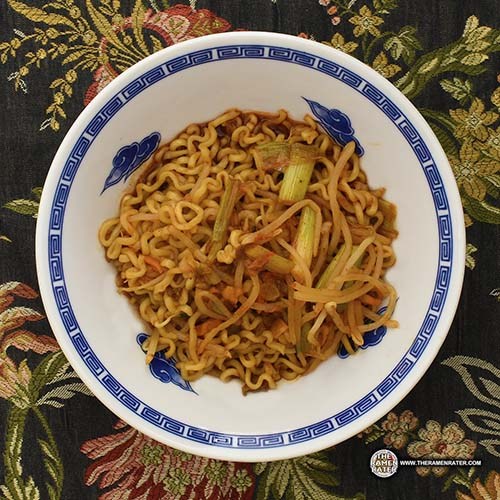 Finished (click to enlarge). Added spring onion and Salad Cosmo mung bean sprouts. The noodles come out very well – good gauge and chew to them. The flavor is a strong sort of tomato kimchi and the included kimchi with it is of very good quality – hydrates well and has a nice crunchiness. 4.75 out of 5.0 stars. EAN bar code 8801073113466.

Samyang Foods makes Buldak Bokkeummyun – the fire noodle challenge range. One of them is ‘ice’ or ‘cool’ – this is served as a cold noodle. Cold noodle varieties are popular for the summer months.