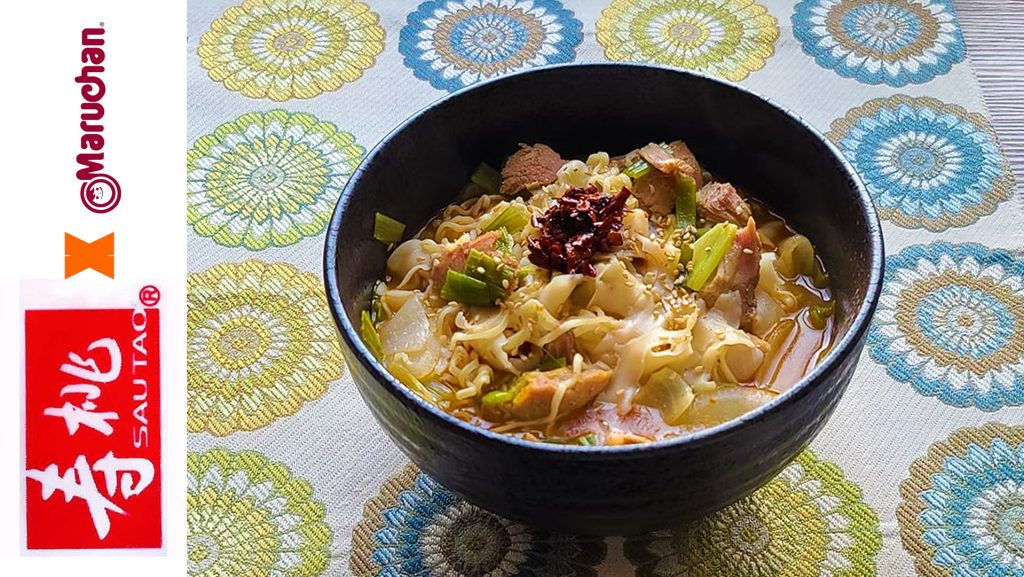 We had a great Thanksgiving yesterday – Kit made a wonderful turkey, chocolate chip banana bread too! My buddy Matthew Bellah (the highly acclaimed author) brough over homemade cornbread and traditional stuffing, mashed potaoes, and a loaf of fancy bread.

Well (click to enlarge), here’s the delightful dinner I had the fortune to enjoy. Was a very nice evening. But now what to do? Matt and I did sample some thimblefulls of a concoction known as a Bombay Mule – gin, ginger beer, and lime juice – and it left me a little, well, less than 100% this morning.

Boil an amount of water. Add in tom yum pack contents. Start adding in things one by one and cook the heck out of it.

Finished (click to enlarge). The two types of noodles had a nice bit of contrast to each other which was nice. The broth really lost all of it’s tom yum taste – it also was quite rich (thanks to the dark meat turkey).  Was going to have a plate of Thanksgiving or maybe a turkey sandwich, but this sounded nice. What are you doing with your leftovers? Make sure to share on the Instant Noodles – The Ramen Rater Facebook group!

This is Miles’s favorite song – thought you might enjoy. This is an example of Library Music. Library Music is an interesting thing; companies will produce a ‘library’ of music for sale as a package to license to companies for use in their commercials, TV shows, etc. Most of it is never offered up for consumer consumption, so it’s kind of hard to find. There’s a ton of these KPM 1000 series albums on Amazon Music Unlimited though – just bark ‘alexa, shuffle songs by Keith Mansfield’ and you should get a ton of neat stuff to listen to. There’s a recently released documentary about it on Amazon too – haven’t seen it yet but it looks good. The trailer can be found on YouTube.