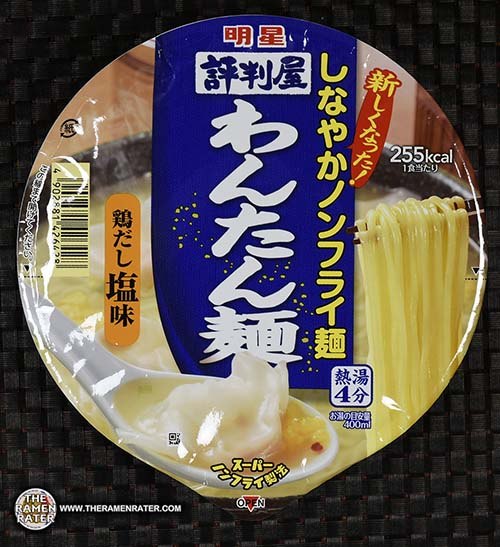 Here’s another one sent by Zenpop. Zenpop is a subscription box service where you can get many varieties of Japanese products sent to your door monthly. Here’s what they had to say about this variety –

Wanton and smooth noodles in the chicken broth soup taste simple but wonderful. You know what wanton is? It’s a kind of Chinese dumpling which is small and usually eaten boiled in soup. This bowl in lighter and lower in calories than others so enjoy freely anytime!

Well, anytime is now! Here’s a little about shio from Wikipedia as well –

Ah, what the heck. Here’s something about wanton from Wikipedia as well –

A wonton (also spelled wantan, or wuntun in transcription from Cantonese; Mandarin: húndun or húntun) is a type of dumpling commonly found in a number of Chinese cuisines.

Wontons are commonly boiled and served in soup or sometimes deep-fried. There are several common regional variations of shape.

The most versatile shape is a simple right triangle, made by folding the square wrapper in half by pulling together two diagonally opposite corners. Its flat profile allows it to be pan-fried like a guotie (pot sticker) in addition to being boiled or deep-fried.[citation needed]

A related kind of wonton is made by using the same kind of wrapper, but applying only a minute amount of filling (frequently meat) and quickly closing the wrapper-holding hand, sealing the wonton into an unevenly squashed shape. These are called xiao huntun (literally “little wonton”) and are invariably served in a soup, often with condiments such as pickles, ginger, sesame oil, and cilantro (coriander leaves).[citation needed]

Detail of the side panels. Conatins shrimp, pork, and chicken. To prepare, add powder base and boiling water to fill line. Cover for 4 minutes. Finally, stir and enjoy! 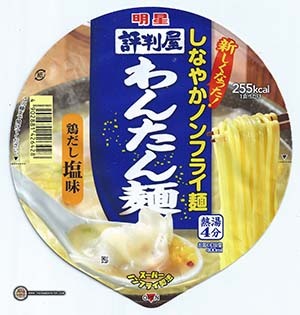 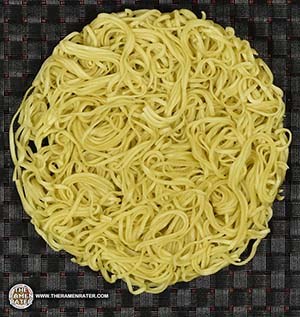 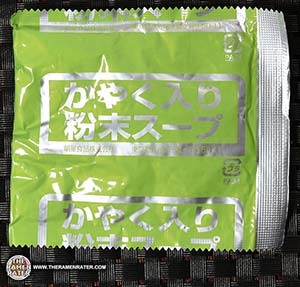 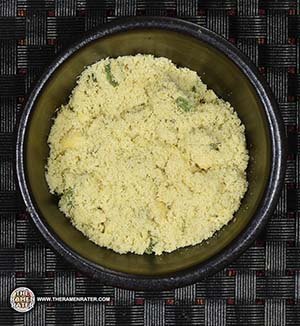 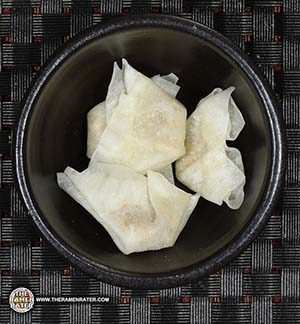 The wanton from the bowl. 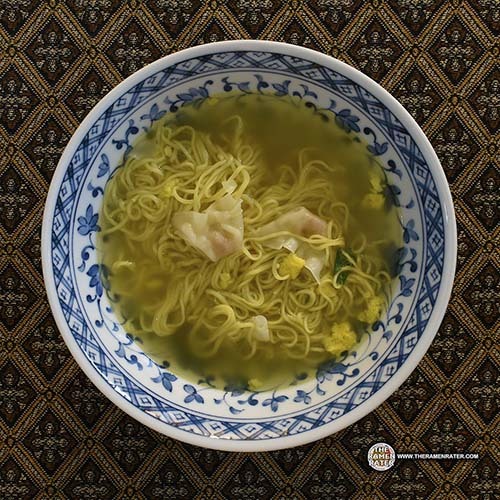 Finished (click to enlarge). The noodles were nice and chewy – had a premium feel to them. The broth was definitely chicken for sure. Was quite comfortable. I really liked the wanton – filled with little meaty bits. Flecks of scrambled egg rounded out the bowl. Not bad. 4.5 out of 5.0 stars.  JAN bar code 4902881426428.