The nice folks at Ippin sent me this one (SG folks click here) – thanks again! They are purveyors of all things Japanese! So I would say most  Japanese instant noodles contain pork. Whether it be a chicken, seafood or whatever, it’s in there. Not with this one and That’s great for those that follow Islamic guidelines. So what is Halal? Let’s ask Wikipedia:

Halāl (Arabic: حلال‎‎ ḥalāl, “permissible”), also spelled hallal or halaal, is any object or action which is permissible to use or engage in, according to Islamic law. The term covers and designates food and drink as well as matters of daily life.[1] It is one of five Ahkam—fard (compulsory), mustahabb (recommended), halal (allowed), makruh (disliked), haram (forbidden)—that define the morality of human action in Islam.[2]Mubah is also used to mean “permissible” or “allowed” in Islam.

The most common example of non-halal (or haram) food is pork (pig meat products). While pork is the only meat that cannot be consumed by Muslims (the Quran forbids it[7] Sura 16:115 [8]), other foods not in a state of purity are also considered haram. The criteria for non-pork items include their source, the cause of the animal’s death, and how it was processed. It also depends on the Muslim’s madhab.

Muslims must also ensure that all foods (particularly processed foods), as well as non-food items like cosmetics and pharmaceuticals, are halal. Frequently, these products contain animal by-products or other ingredients that are not permissible for Muslims to eat or use on their bodies. Foods that are not considered halal for Muslims to consume include blood[9] and intoxicants such as alcoholic beverages.[10] If there is no halal food available and a Muslim is forced by necessity, then a Muslim is allowed to eat non-halal food in order to prevent death due to starvation.[8][11]

Globally, halal food certification has been criticized by anti-Halal lobby groups and individuals using social media.[12] The critics argue that the practice results in added costs, a requirement to officially certify intrinsically-halal foods, leads to consumers subsidising a particular religious belief.[13]Australian Federation of Islamic Councils spokesman Keysar Trad told a journalist in July 2014 that this was an attempt to exploit anti-Muslim sentiments.[14]

As I mentioned above, pork is usually a component of almost all Japanese varieties. So this product gives people who would like to have some nice ramen a way to have it while following their beliefs. So let’s check out these noodles by Ajinatori!

Here’s the back of the package (click to enlarge). To prepare, boil noodles for 3~5 minutes. In a separate bowl, add soup base and 300ml boiling water. Next, drain noodles and add to bowl with soup. Finally, stir and enjoy! 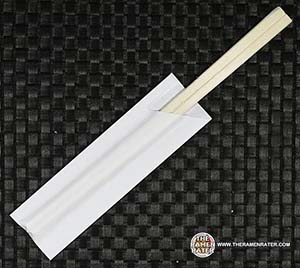 Included chopsticks! I have to say that it sure seems like it makes sense to include chopsticks with instant noodles; I mean most people in Asia use them, so why would a fork be included? I’m guessing since a fork can be a foldable fork and take much less space. But hey – foldable chopsticks perhaps? 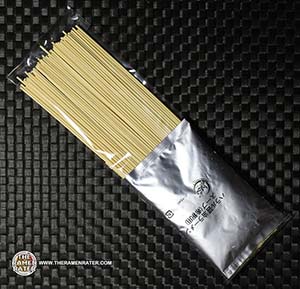 The noodles are in a sealed pouch along with the soup base sachet. 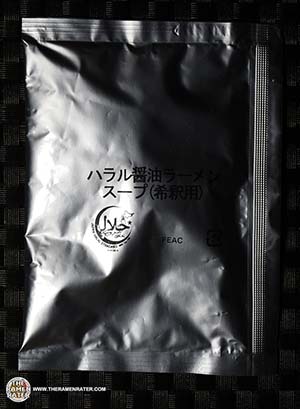 Here’s the soup base sachet. 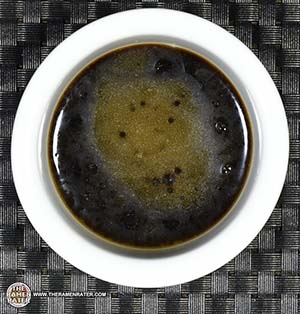 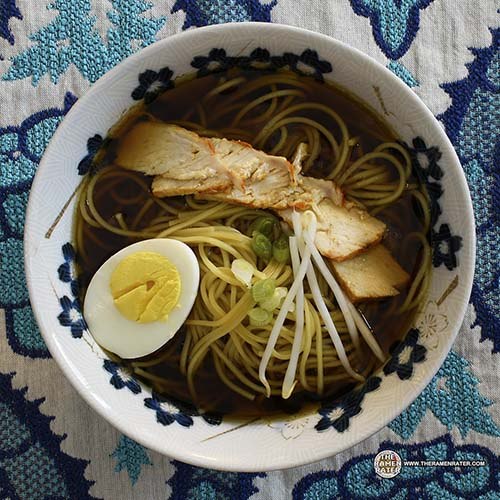 Finished (click to enlarge). Added Salad Cosmo mung bean sprouts, baked chicken, hard boiled egg and spring onion. The noodles were of good quantity, but that’s where it kind of ended for them. Alas, they were round, thick, and crumbled a lot. The shoyu broth was very good, however. It has a good oiliness and a nice chicken and soy sauce kind of flavor. With better noodles, this would have been a 5.0, however it’s a 2.5 out of 5.0 stars.  JAN bar code 4937678050616.