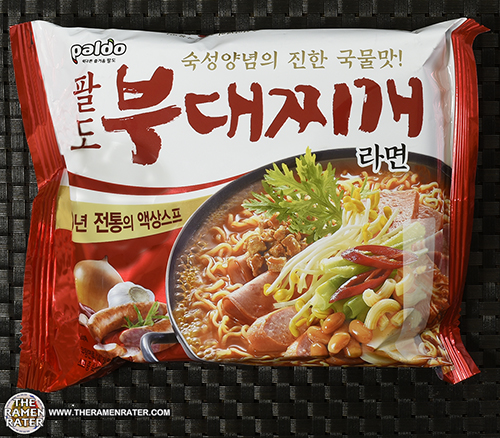 Today I’ll be trying something new sent to me by Yongmin Park of Paldo – thank you very much! Very curious about this one as I’ve never seen it before. This is Budae Jigae – let’s see what Wikipedia has to say about it:

Budae jjigae (Korean pronunciation: [pudɛ tɕ͈iɡɛ]; literally “troop stew”) is a type of jjigae (a thick Korean soup similar to a Western stew). Soon after the Korean War, food was scarce in Seoul, South Korea. Some people made use of surplus foods from U.S. military bases around the Uijeongbu area, Pyeongtaek area (also called Songtan)[1] or Munsan area, such as hot dogs, Spam, or ham, and incorporated them into a traditional spicy soup flavored with gochujang (red chili paste) and kimchi.

Okay, this really sounds fascinating! Let’s give it a try, shall we? 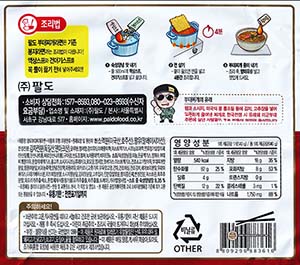 Here’s the back of the package (click to enlarge). Looks to contain meat. To prepare, Add the large sachet contents to 500ml boiling water and stir. Add in the noodle block and simmer for 4 minutes. Add in contents of oil sachet. Stir and enjoy! 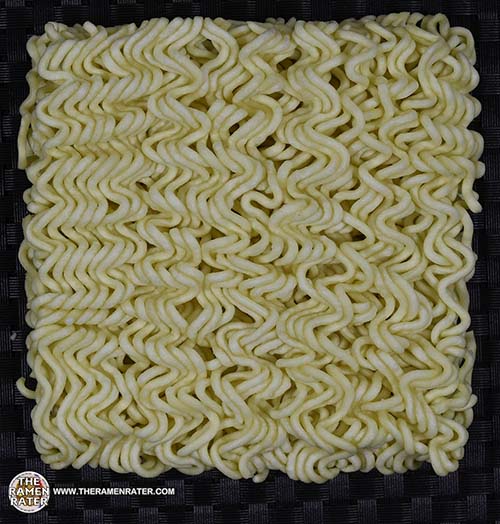 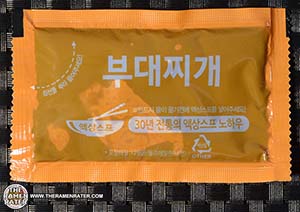 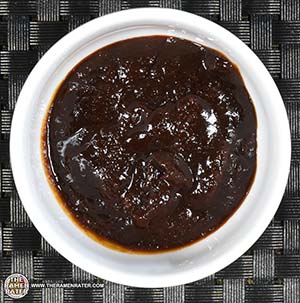 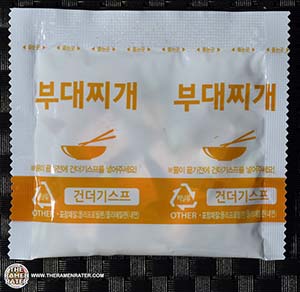 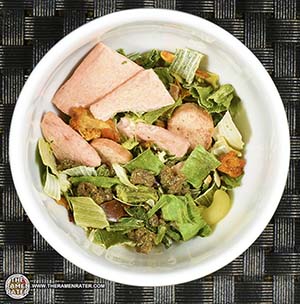 Lots of interesting things in here – looks like sausage and tofu amongst other things! 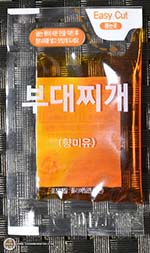 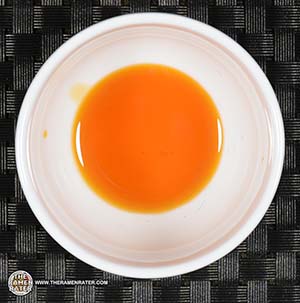 Definitely detecting the scent of a hot dog vendor! 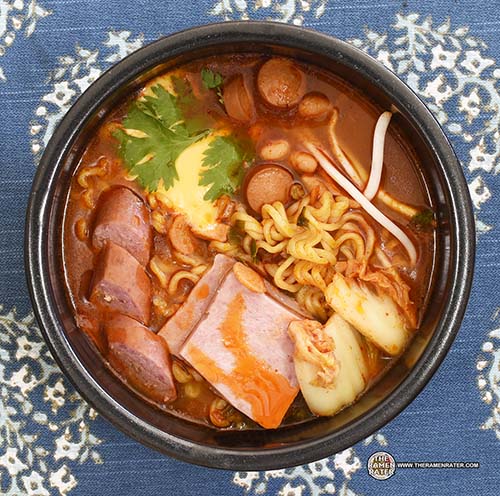 Finished (click to enlarge). Added Salad Cosmo mung bean sprouts, coriander, processed cheese, Beanee Weenie, sausage, SPAM and kimchi. Wow – okay again I’m shocked when something comes across my desk that’s unlike anything I’ve reviewed before. Starting with the noodles – they’re great – thick ramyun. Chewy and thick gauge. The broth is really good – a little thicker than most and has a kind of ‘been boiling with hot dogs in it all day’ kind of thing going on. The included garnish was a real treat as it contained not only beans, processed meat and slices of sausage but pieces of macaroni as well. They really went above and beyond on this one and I’m impressed. Definitely find this one for the Winter months – good ‘stick to your ribsy’ kind of stuff. 5.0 out of 5.0 stars.  EAN bar code 8809296883616.