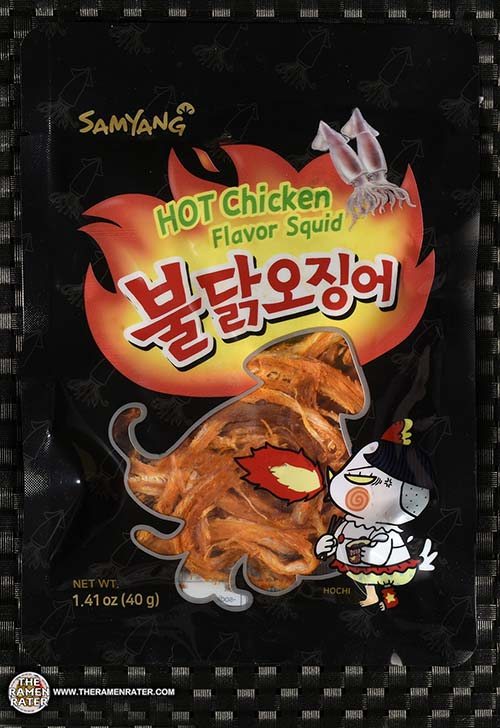 What we have here is a squid snack – what’s that you ask? Well, they dehydrate squid somehow and seasoning it. I read once there was a a package of this kind of thing that said ‘chewing gum of Asians. Here’s some background on this from Wikipedia –

Dried shredded squid is a dried, shredded, seasoned, seafood product, made from squid or cuttlefish, commonly found in coastal Asian countries, Russia, and Hawaii. The snack is also referred to as dried shredded cuttlefish.

Historically, squid is common in Pacific coastal regions of East Asia and Southeast Asia. After the packaged form began shipping to English-speaking regions, the Japanese word surume and yóu yú sī in Chinese for this form of seafood was translated as “dried shredded squid” and imprinted on packages. The snack was popularized, sold, and consumed regularly in Hong Kong during the 1970s. Shredded squid began being sold in Macau as an addition to their almond biscuit. In China, it is usually considered to be a light snack, sold in bags in many department stores in major cities. In Japan, dried shredded squid is popularly served as an otsumami (snack consumed while drinking alcohol). In Korean cuisine, dried shredded squid is eaten as anju (food to eat while drinking) and as banchan (small side dishes), such as the dish ojingeochae bokkeum, which is made by stir-frying dried shredded squid seasoned with a mixture of gochujang (chili pepper paste), garlics, and mullyeot (corn syrup-like condiment).[1] In Singapore, it was also popular amongst the older generation when it was sold in a Mama shop. It was marketed as the Chewing gum of the Orientals by the food manufacturing company Ken Ken, during the chewing gum ban in Singapore.[2] 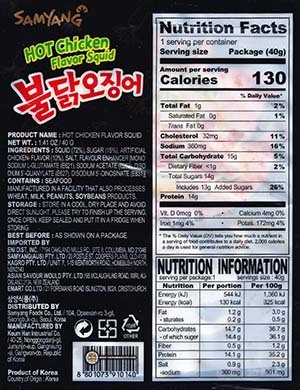 Here’s the back of the package (click to enlarge). Contains squid. To prepare, open the package, pull out a piece and put in your mouth. Finally, chew and enjoy! 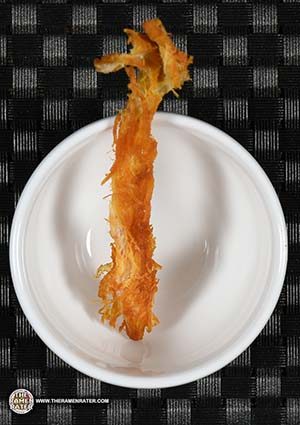 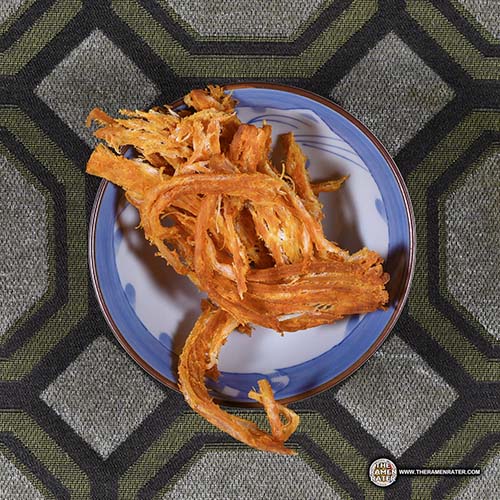 Finished (click to enlarge). Indeed, this is very chewy. It has a strong and spicy flavor of Samyang Foods Buldak Bokkeummyun. The squid as you chew imparts its own flavor – which is good. Also, although chewy and dehydrated it isn’t overly dry. For a snack I give this 3.75 out of 5.0 stars. EAN bar code 8801073910140.

Here’s how to make seasoned shredded s q u i d snack at home!