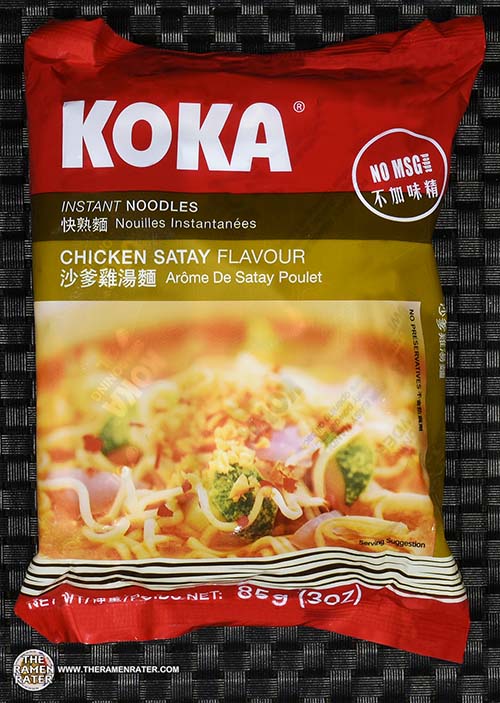 I don’t think I’ve had a satay flavor variety in a long time so this should be interesting. Indeed, we should see what Wikipedia has to say about satay –

Satay (/ˈsæteɪ/, /ˈsɑːteɪ/ sah-tay), or sate in Indonesian and Malaysian spelling, is a dish of seasoned, skewered and grilled meat, served with a sauce.[1] Satay may consist of diced or sliced chicken, goat, mutton, beef, pork, fish, other meats, or tofu; the more authentic version uses skewers from the midrib of the coconut palm frond, although bamboo skewers are often used. These are grilled or barbecued over a wood or charcoal fire, then served with various spicy seasonings. Satay can be served in various sauces, however most often they are served in a combination of soy and peanut sauce.[2] Hence, peanut sauce are often called as satay sauce.[3]

Satay originated in the Indonesian island of Java.[4][5][6][7] It is available almost anywhere in Indonesia, where it has become a national dish.[8][9] It is also popular in many other Southeast Asian countries, including Malaysia, Singapore, Brunei, Thailand, the Philippines, East Timor as well as in Suriname and the Netherlands, as Indonesia and Suriname are former Dutch colonies.

Satay is a very popular delicacy in Indonesia; the country’s diverse ethnic groups’ culinary arts (see Indonesian cuisine) have produced a wide variety of satays. In Indonesia, satay is a popular street food,[4] it can be obtained from a travelling satay vendor, from a street-side tent-restaurant, in an upper-class restaurant, or during traditional celebration feasts. For Malaysia, satay is a popular dish—especially during celebrations—and can be found throughout the country. In Southern Philippines it is known as satti.

There’s a bit of info for you. So a peanut and soy sauce kind of chicken taste. Indeed it sounds interesting. Let’s check it out! 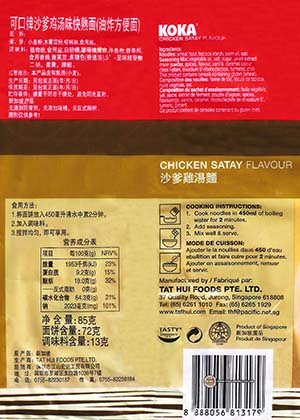 Here’s the back of the package (click to enlarge). Looks to be meat free but check for yourself. To prepare, add noodle block to 450ml boiling water and cook for 2 minutes. Add in sachet contents. Finally, stir and enjoy! 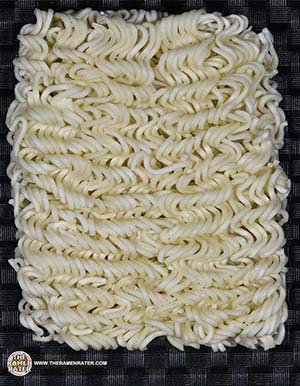 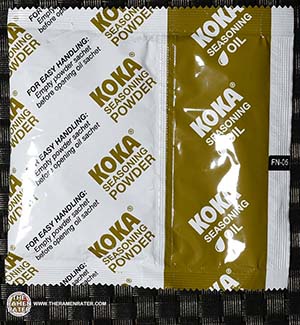 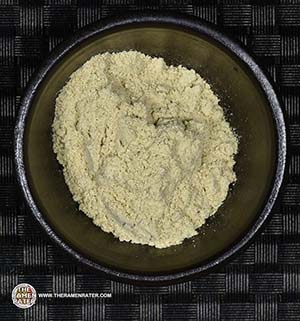 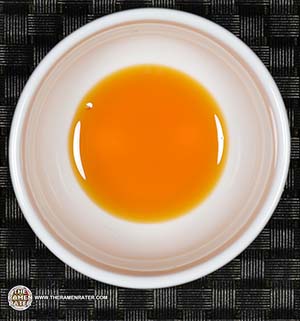 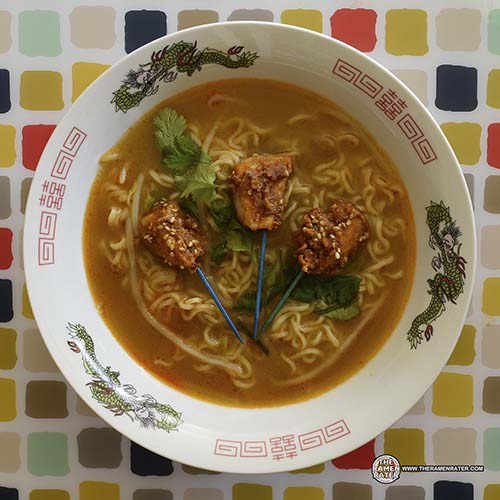 Finished (click to enlarge). Added Salad Cosmo mung bean sprouts, coriander and chicken sauteed with peanut butter, Huy Fong sriracha chilli sauce and sesame seeds. The noodles are good – a nice little bit of backbone, a decent gauge. The broth has a good bit of oiliness and the flavor is a little peppery, a little a little sweet and a kind of chicken taste going on. It’s unique and tasty. 3.5 out of 5.0 stars.  EAN bar code 8888056813162.

A video showing chicken satay being grilled in Singapore.