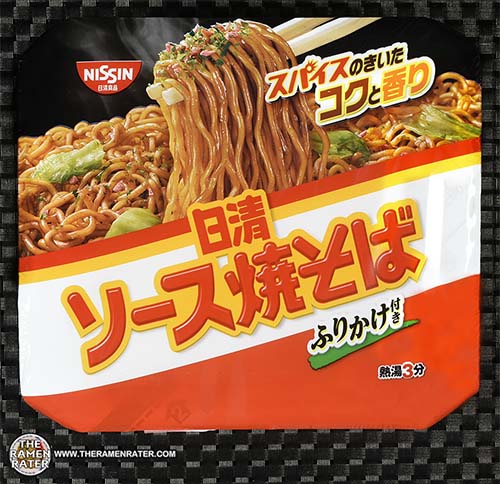 It’s kind of interesting. Indeed, I review two products a day but generally only post one. This ensures two things. First, I get to everything before it expires. Second, I have a buffer in case I don’t have time to do a review. Meanwhile, the buffer has grown and is quickly reaching 80 reviews! I did this review on November 13th, 2016 and today is Inauguration Day, January 20th, 2017. It’s kind of funny; I did this review about as many days before my daughter Miriam was born as days since she was born (December 17th). Another interesting thing is while unplanned, this review follows Momofuku Ando Day yesterday where I did a video about Nissin Yakisoba. Weird. Finally Happy Birthday to my sister Sue!

I reviewed this Nissin Yakisoba so many years ago that I think it deserves a new number today. Why? Well, back then it had a mayonnaise and mustard pack which is not present here; kind of a bummer since it went so well. But hey – I have a feeling this will be good. I thought I’d review this one today as my wife Kit really likes yakisoba and I’m about to go on a big trip to Taiwan tonight. Going to be gone for five days. This will be the longest I’ve been away from my son Miles since he was born – going to miss them both so much! I should mention that this review will be coming out long after I’ve returned – its November 13th right now and I wouldn’t be surprised if this doesn’t come out until around New Year’s Eve. Anyways, what’s yakisoba? Let’s ask wikipedia –

Yakisoba (焼きそば?), literally “fried buckwheat,” or sōsu yakisoba (ソース焼きそば?) (the same, but in sauce), is considered a Japanese dish but may have originated in Japan as a variant of fried noodles. It first appeared in food stalls in Japan during the early 20th century.[1] Although soba means buckwheat, typically suggesting noodles made from that flour in mainland Japan, yakisoba noodles are made from wheat flour. It is typically flavored with a condiment similar to oyster sauce. Prepared by frying ramen-style noodles with bite-sized pork, vegetables (usually cabbage, onions or carrots) and flavored with yakisoba sauce, salt and pepper. It is served with a multitude of garnishes, such as aonori(seaweed powder), beni shoga (shredded pickled ginger), katsuobushi (fish flakes), and mayonnaise.

Let’s check it out! 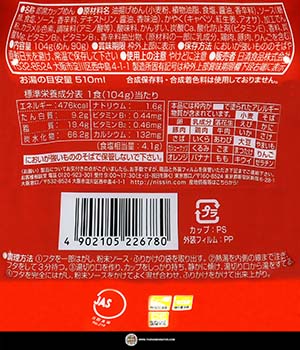 Detail from the bottom and sides of the cellophane outer wraps (click to enlarge). 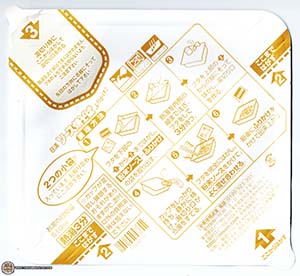 Detail of the lid (click to enlarge). Probably contains fish. To prepare, open tab 1 to line 2 and take out sachets. Add boiling water to line and close for 3 minutes. Next, remove tab 3 to expose drain spout and drain. Finally, add in contents of sachets. Stir and enjoy! 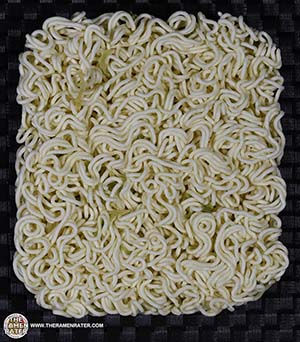 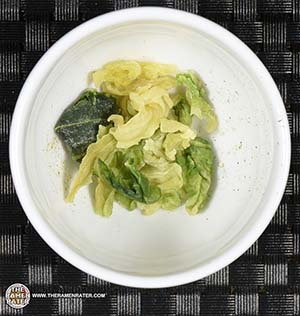 Bits from under the noodle block – primarily cabbage. 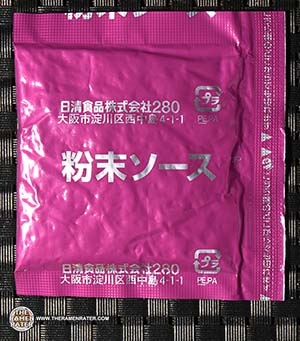 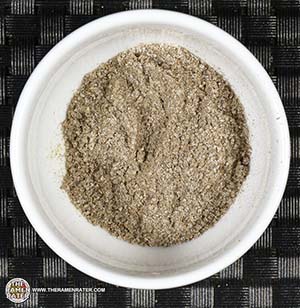 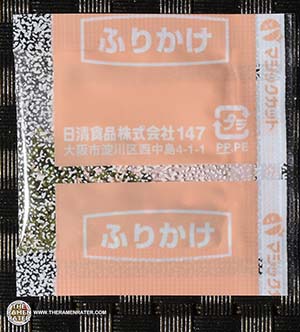 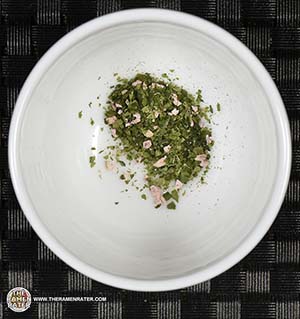 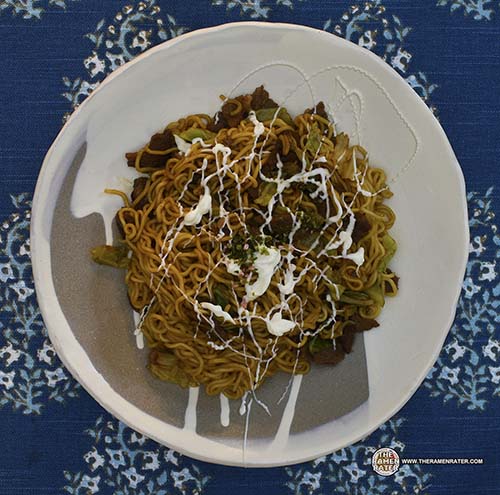 Finished (click to enlarge). Added beef and mayonnaise (put mayonnaise in a sandwich bag in one end then poke holes with a toothpick in one side on the other end and squirt) and beef. The noodles came out well – a little thinner than expected. Indeed, the quantity is serious here – only for those with a serious appetite! The yakisoba flavor is a little lighter than expected but it’s very good – not overdone. The cabbage is nice and crunchy and the sprinkle of togarashi is a plus. 5.0 out of 5.0 stars. JAN bar code 4902105226780.

A video from the Sixth Annual Momofuku Ando Day of me preparing Nissin Yakisoba.