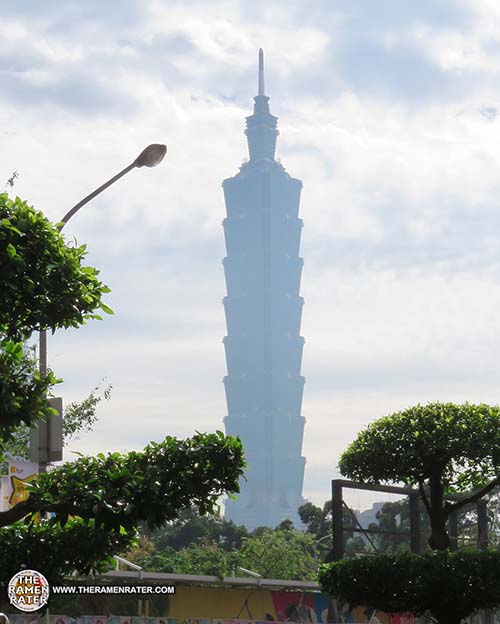 Our last day in Taipei greets us again with the Taipei 101 yet again; a constant companion during the trip. Definitely tired still after going so many places and seeing so many new things, we start the day that will end up with us coming home.

Had some breakfast buffet at the United Hotel. Have found I like baked sweet potato as well as baked pumpkin. Also has sliced pork in oyster sauce, taro buns and some noodles. We also stopped by the 7-Eleven one more time – I found a couple gifts to bring home and yet another bowl of noodles. To be honest, I didn’t know whether or not any of my noodles would end up making it home; so many contain meat and that generally gets a big no from the CBP/USDA, so my fingers are crossed! Kyle picked us up for lunch and we planned on going to a popular beef noodle soup place but the line was pretty crazy so we went to a place called Lao Zhang. We started with some steamed rice with pork which was really good – served in a little wooden pot and underneath was a little bit of yam. It was accompanied by some cucumber and eggplant. Next was the beef noodle soup which was out of this world good! Afterwards we wandered around the area to find some snow ice. I tried this the night before at Raohe night market. Basically imagine the fluffiest snow that tastes like vanilla ice cream topped with mango and mango syrup as well as some whipped cream and custard on top. Ended up sitting next to a nice family from Washington D.C. (the other Washington!) who had moved to Taiwanbn. I asked how they liked it and they were really happy there. We walked around a little more and found something interesting. A while back, I saw a video showing a place that was selling stuff from my top ten list – not only that, it was using signs that said The Raman Rater (sp) and even pictures of me. Well, they don’t have that anymore at this particular shop but I intrroduced myself and the lady working there knew who I was. Pretty neat – gotta go 6,000 miles from home to meet people who recognize me ha! I also took a second to marvel at an automated display of chopsticks and noodles in front of a Japanese ramen shop.

Next we visited the National Museum Of Taiwan. We drove up and up and up – it’s on the side of a mountain. So many people and lots of walking and stairs – I was going to have no problem sleeping on the flight home tonight! Saw lots of Taiwanese antiquities – lots of jade, calligraphy and statues. Very impressive – especially how ancient many of them were. One bowl in particular caught my eye – I guess when I’m a billionaire maybe I can start doing my reviews in 500+ year old bowls!

We ended up going to Back Garden restaurant overlooking Taipei. A neat place with a great view, and awesome food! Had some nice fried tofu, water spinach, and sweet and sour pork. Now what’s nice about the sweet and sour pork is that it wasn’t breaded and deep fried like they do here in the states; it was moist and tender with pineapple and a sweet and indeed slightly sour sauce. Finally, we had some crusted cod which was really good. A great way to cap off our trip. We headed back to the United Hotel to get our luggage and catch a cab to the airport. We bid Kyle a fond farewell and a big thanks for showing us a great time in Taiwan – he really went above and beyond.

We took a cab to the airport and I recorded the whole thing. As soon as I uploaded the video to YouTube, it told me that there was a copyright claim (the cabbie had music going) and the whole point of posting this super long video was that towards the end you can hear him singing along to the music. The singing cab driver was one of the last fond memories of Taiwan. Unfortunately, YouTube scrapped the audio so I put in some of my own, but here’s an audio clip of what I’m talking about.

Got through security and had a few minutes to chill before the next flight. Ate the first meal and then passed out, waking up about 1,000 miles from home which was nice. Got to Seatac Airport and went through the security/customs re-entry without a hitch and rolled my luggage full of meaty noodles, big hats from flipping noodles and plenty of other things. Met my wife and two sons at the airport arrivals gate and soon we were on our way home. I want to thank everyone at Mom’s Dry Noodle for making this trip happen. I also want to thank my sister Sue for coming with me and watching out for curbs and other easily tripped over things what with my poor vision. Finally, I want to thank my lovely wife Kit for letting me go while she stayed at home with our boy Miles, dog Otis, and our daughter who she will give birth to any day now. Good to be home again.