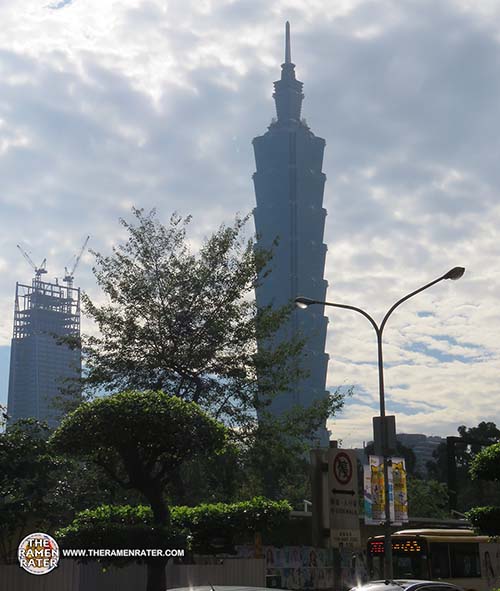 Yet again, we start our day gazing at the Taipei 101 as it towers over the local landscape. Kyle picked us up and we went to the Mom’s Dry Noodle offices.

ET Today, a well-known Taiwanese news website wanted to do an interview with me and I accepted. It was nice to actually do an interview with the Taiwanese press; so often they don’t do interviews with me and so I don’t get a chance to comment on stories that are put out. What also was nice ws to have Kyle there to translate – I think that made a big difference,  Here’s the article (warning – Google Translate does a poor job on this one). Kyle had some work to do, so James took us out on the town.

During the trip, I asked a lot of questions. One I’d been particularly interested in was how people get their ‘Western’ names. Kyle mentioned how very often a teacher in English class will assign you one ‘you look like a Keith or John’ etc. Kyle got his from a friend who thought it was a good name. James got his from the daughter of a family friend. I asked James if he felt put  off by the need for a Western name; I mean, shouldn’t we in the West have the respect to learn everyone’s name, regardless of whether it’s European or not? He said that it was very important in school, especially in the West. Growing up here, I remember how cruel other kids could be, but it sounds like a lot of kids give Asian kids a lot of crap. Knock it off, I say!

He also mentioned something extremely funny. So if you want to make someone from Taiwan mad, say China number one. To anger the Chinese, say Taiwan is number one. Well, here’s a video from YouTube of how this got started. In fact, the guy who says Taiwan #1 ended up being invited to Taiwan by the company! I found myself saying TAIWAN NUMBER ONE repeatedly during the rest of the trip, and I think it’ll be something I’ll be saying in upcoming top ten lists when Taiwan appears.

We went to lunch at Saboten, a tonkatsu restaurant. So many of you are familiar with tonkotsu, a Japanese style of ramen with a milky pork bone broth. Tonkatsu is usually breaded pork or chicken. It was excellent – you got a choice of tonkatsu with either cheese or asparagus in the center (I went for the asparagus). A mortar and pestle with sesame seeds was there – you grind the sesame seeds and it brings out the scent and then add plum sauce; seriously good with the meat. Shredded cabbage and grapefruit dressing was refreshing as well. My set included the tonkatsu, a couple pieces of seafood tempura – oyster and shrimp. I’ve honestly never liked oyster – until I had this! Awesome lunch.

Next we hit Miramar Entertainment Park, like a big mall. Now this was huge – I think there were six floors! At the top was a ferris wheel my sister took a ride on. We checked out a Carrefour that was in there. Carrefour is like a grocery/department kind of store. Got a ton of instant noodles there! Up a bit and we saw some familiar things – Subway, Krispy Kreme, Jamba Juice – all with neat Taiwanese twists to them. Next floor was the kid’s level – I was hoping to find some clothes for Miles and our daughter who will be born next month. I ended up at Toy World, a place my son Andy would have really liked. He’s a Pokemon fanatic and so I played a game and got him a little square plastic trinket (which he’s pretty stoked on by the way). One of my favorite things were the storage lockers. Not that storage lockers are all that exciting, but the big warning signs not to leave pets, drugs, guns, diamonds or babies in there. Pretty awesome.

We got dropped off back at the hotel and said goodbye to James and took some time to chill. Then met Kyle in the lobby. We were going to go out for dinner, but we decided to go to Raohe night market instead. Got to try even more delicacies – cock’s comb (the pointy thing on a rooster’s head), duck tongue (very chewy and tough), chicken heart, fried frog (quite tasty), spicy fishball, dragonfruit drink and fried milk. I also found some clothes for the kiddos which was awesome. A good evening of tromping around and trying new things. 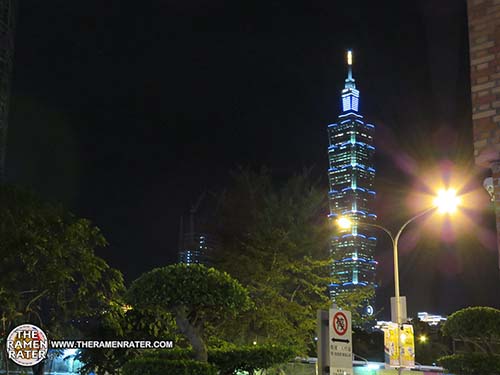 Full of different animals parts, we ended up back at the hotel. Another very full day in Taipei and ready to crash.