A couple of months ago, I was invited by Kyle Kao of Mom’s Dry Noodle – a company in Taiwan – to visit and check out their operation. Just like last time I traveled (last May to Thailand), my wife is pregnant and the trip would happen when she was too far along. Again, just like last time, she said it was alright to go and I was accompanied by my sister Sue. Like many of you know, I can’t see very well so I need a little help when travelling. In the following posts, I will chronicle everything we saw and did while there. Thank you so much to Kyle for extending this invitation, as well as to Perry, James and everyone else we met there – You made us feel welcome and we had an amazing time! I hope you all enjoy the posts!

November 13th, 2016 we headed to the airport. Got there around 10pm to make sure I’d get through security and check luggage in time for our flight. The flight was at 12:50am (the 14th) – and we would arrive around 13 hours later (which would be around 6am on the 15th, Taiwan time! The flight was great – I ate the dinner, took a sleeping pill and got about 6-8 hours of sleep. After the trips before, I was totally prepared; I knew that if I didn’t sleep on the flight, I’d get there zonked – and early in the morning. This time it was nice to feel human when I arrived. First thing, we went through immigration. I walked up to the counter ‘hello, how are you doing?’ ‘Not good’ the officer replied. Apparently I needed to fill out a form and then return to the desk. ‘Fill this out and then find me.’ I filled it out and then talked to different officer and was let through into Taiwan! Taoyuan Airport is a place I’d been 4 times previous, connecting to different flights – but I’d really wanted to get out of that airport and see Taiwan. Well, this time I was able to. We headed out and met Kyle and were off to breakfast.

Kyle took us to a little place in Taipei – soy milk, soup dumplings, a congee-like soy item, fried radish cake, buns and a kind of Taiwanese pastry followed. It was early – and busy. Afterwards we stopped in at a Family Mart – kind of like 7-Eleven (Kyle told us that there are around 2,000 7-Elevens in Taiwan – and we saw a ton of them everywhere). Checked out the noodle selection and got some bottled waters. Next we visited a temple (out of order sorry – that’s the next video) then visited the Mom’s Dry Noodle office. It was a neat place – got to meet Perry Chen, co-founder and watch a presentation about the company. Then we tried some of their new products – good stuff! Also got to meet James Lee – making the shallot and spring onion base for one of their noodle products. A huge, bubbling cauldron with steam issuing upwards; a strong scent wafting in the air. They also make a spicy Sichuan base – I’m guessing that really opens up the sinuses when its cooking! Next stop was lunch at a restaurant in a new Breeze Mall called Dim Dim Sum. I’ve been a fan of dim sum for as long as I’ve loved noodles and this place had some great stuff as you see towards the end of the video.

Okay, rewinding a little bit (we did so much on this trip that it’s a little hard to put it in the right order). Like I was saying, after breakfast we checked out a Taoist temple. As we got closer to the entrance, we could hear chanting, a drum being hit, a bell. There was a large covered area full of people looking toward the source of the chanting. People would bow at certain points. Others were throwing things on the ground which Kyle explained were kind of like dice; you ask a question – should I stay at my job or go for a new opportunity – questions like that that involve changes in the direction of one’s life. If the two pieces land face up, the answer is yes. Otherwise, the answer is no. The chanting and the sound of the pieces hitting the ground was compelling; the architecture was amazing as well.

Next, we headed to the Taipei 101 which is the world’s second tallest building. There was a Jason’s Market there and I scored some noodles. Then we took the elevator up, up and up some more. It was weird – it didn’t feel like it was moving – just a little hum and feeling my ears popping as it hurtled upwards at 10 meters per second. The view was amazing from the 88th floor, and then a quick hike up three flights of stairs and we were on the outside deck – very windy at the top! Afterwards, we checked into our room at the United Hotel and had some down time (we walked over to the local 7-Eleven and I nabbed some noodles. Then it was time to go out for dinner.

We went to a restaurant called Hawji. Had papaya milk – much like an Orange Julius but with papaya juice. We talked a lot about food and that I really wanted to find a place to try snake while in Taipei. Steamed spider was mentioned – and yeah, I would’ve tried that if we’d have found it somewhere. New things are what I live for, and eating spider and snake are definitely things I’d not tried before. We dined on squid, shrimp salad, duck, pork and other delicious fare. 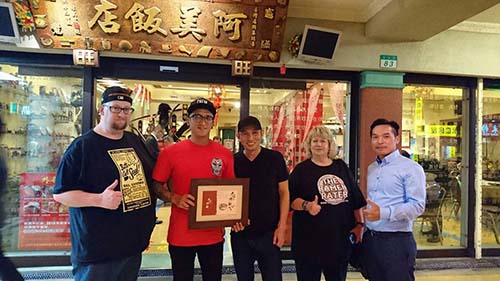 After dinner in front of Hawji restaurant. From left to right: Hans ‘The Ramen Rater’ Lienesch, Kyle Kao, James Lee, Susan Lienesch and Perry Chen. Kyle is holding a framed label I brought from the Mom’s Dry Noodle package that made The Ramen Rater’s Top Ten Taiwanese Instant Noodles 2014 Edition in the top spot. 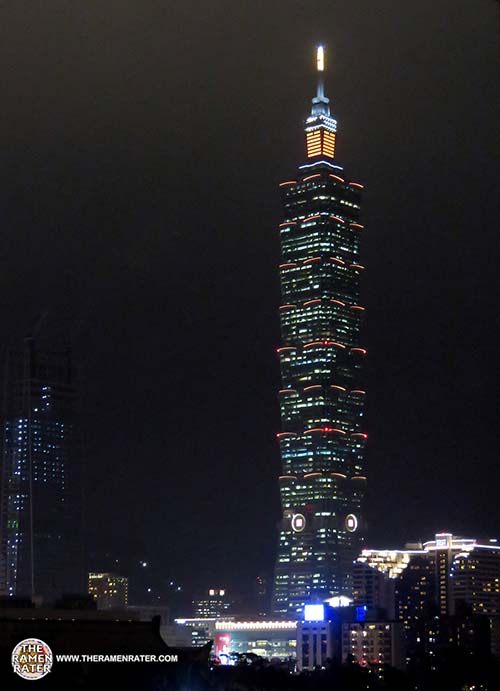 After dinner, we went to a fruit stand and they got me a sugar apple – a bumpy green fruit with really soft innards that was very sweet and tasty. I tore into it when we returned to our room at the United Hotel and looked out the window at the Taipei 101. Our first day in Taiwan was really amazing – already have seen and done so much and there are four more days to go!