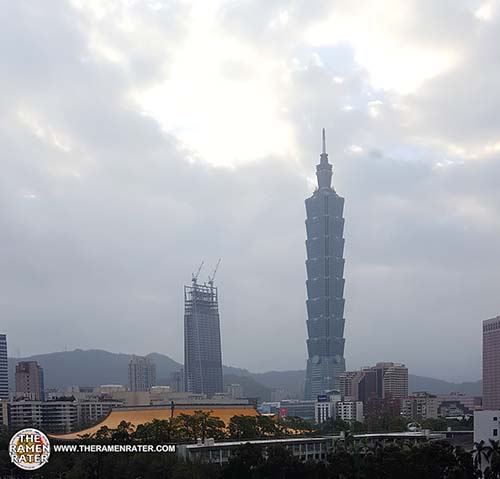 Awake this morning in Taipei. Headed down and had some breakfast at the buffet – onion pancake, taro and red bean buns, orange juice.

Kyle met us with a taxi out from of the United Hotel and then we picked up Perry and headed to the train station. The THSR (Taiwan High Speed Rail) stations were ultra modern and really nice. We got our tickets, hit the 7-Eleven (I think we saw three 7-Elevens in there) and hopped our train heading south. The trains speed along at a top speed of 300 kph (186 mph). It was a very smooth ride and pretty quiet to be honest. It was interesting when we would pass a train heading the opposite direction – it almost felt like the two trains were sucking together for the brief moment they were close. We exited in Tainan and headed for a noodle factory.

Shortly after being picked up, we were in the countryside headed to the Sun Chi factory. I met Darren Wu, the assistant manager. He gave a presentation about the noodles they made there – Guanmiao style. They had me give a try at folding noodles and one thing’s for sure, I shouldn’t quit my day job. Maybe I did have a little jetlag because what looked so simple was absolute rocket science to me! I at least got one folded semi-decently. Next was something I was able to do a little better – flipping the noodles. The sun dried one side, but the other must be dried as well, so someone has to flip the trays over. This I could do and it was fun, but I’m guessing doing this for all the noodles that were out on this day would be a serious task. Visiting Sun Chi was a great experience I’ll never forget.

Next on the agenda was lunch. We went to a famous noodle restaurant called Tu Hsiao Yueh. They opened originally in 1895 after a typhoon wreaked havoc on the fishing industry and started selling noodles with garlic and shrimp on top. On their 100th anniversary, the pot that they still used since their opening busted out the bottom and is on display. The noodles were quite good – tried their rice vermicelli version as well. So many tasty delights here; I particularly enjoyed the braised pork intestine (fei chang) – my sister even tried it and liked it as well.

After lunch we checked into Silks Place hotel – very nice, new hotel. Afterwards, we stopped at Chihkan Tower, which was erected originally by the Dutch in the 1600s. Later, an earthquake destroyed it and was rebuilt by the local leaders. I had no idea that the Dutch had ventured so far so long ago. Next was a boat ride at a national park. The boat heads down a little stream that is covered by trees – very serene and tranquil. Afterwards, we took pictures of the temple next door and then visited a park with a large statue of the Taiwanese god of the sea. Lots of people flying kites there – was a really neat place. We passed a large body of water – the Strait of Formosa. Looking southward was the direction of the South China Sea – a place I’ve always been fascinated by.

Here’s some footage of driving back to the hotel in the evening. It’s a serious contrast to what I see here in the US – so many storefronts, so many businesses. I don’t think I saw any empty ones.

To cap off the day, we all had dinner the the Silks Place hotel restaurant, Silks House. They have a special roast duck – here’s how they describe it: “A premium 3.5kg Yilan cherry duck is roasted to perfection 070-462  in a Cantonese-style hanging oven, resulting in tender, supple meat and irresistibly crispy skin. Armed with over 30 years of gourmet experience, Executive Chef Wei-Chiang Lu showcases his exceptional culinary dexterity as he draws upon local Tainan ingredients in his gastronomic creations.” I’m not sure about the numbers or what they mean, but that was some amazingly tasty duck! They served it four ways: first, mu shu style in a pancake and spring onion. Next as a kind of lettuce wrap, third as a soup and fourth cooked again with more sauce. I thought perhaps the four ways of serving were representative of the seasons but I was reading a little too much into it. Finally, we finished with a kind of cold dessert soup with transparent mushrooms and a honey lemon taste. What a day!