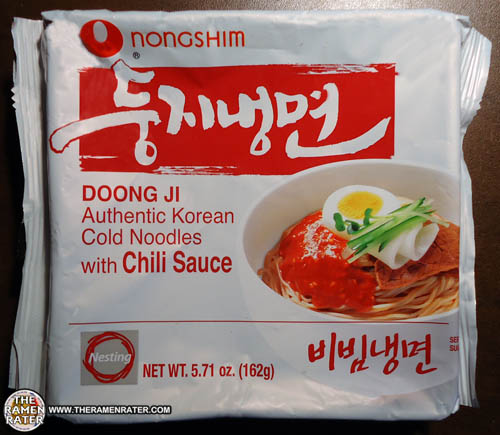 Here’s one that I’ve waiting to review for a while. This is a variety specifically marketed for the summer months – cold South Korean noodles! Thought I’d consult Wikipedia to give some more information on South Korean cold noodle dishes:

Bibim guksu, a cold dish made with very thin wheat flour noodles called somyeon with added flavorings, is one of the most popular traditional noodle dishes in Korean cuisine. It is also called guksu bibim or goldong myeon, all of which literally mean “stirred noodles” or “mixed noodles”. [1] The dish is especially popular during summer.

There are many kinds of cold noodle dishes in Korea, including one made with cold beef broth; however, spicy cold noodles have historically been appreciated by spice-loving people in Korea and recognized internationally. What makes this dish so distinct from other cold noodle dishes from different cultures is the strong spicy flavor produced from the combination of red pepper powder, gochujang, and minced garlic, along with a sweet-and-sour flavor created by vinegar and sugar. Most spicy cold noodles are prepared with haszing duu and a slight touch of sesame oil to enhance the richness of its flavor.

Typically the dish would be prepared by stir frying diced beef, julienned pickled cucumbers, and mushrooms in sesame oil, which is all mixed together with the cooked noodles, soy sauce, sesame oil, sesame seeds and sugar. Garnishes placed on top and around the spicy noodles include hard-boiled eggs, pickled mu, dried gim strips, sliced cucumbers, and sometimes sliced Korean pear or tomato.[1][2]

Sounds like something that’d be great today – supposed to be pretty warm! Let’s give it a try. 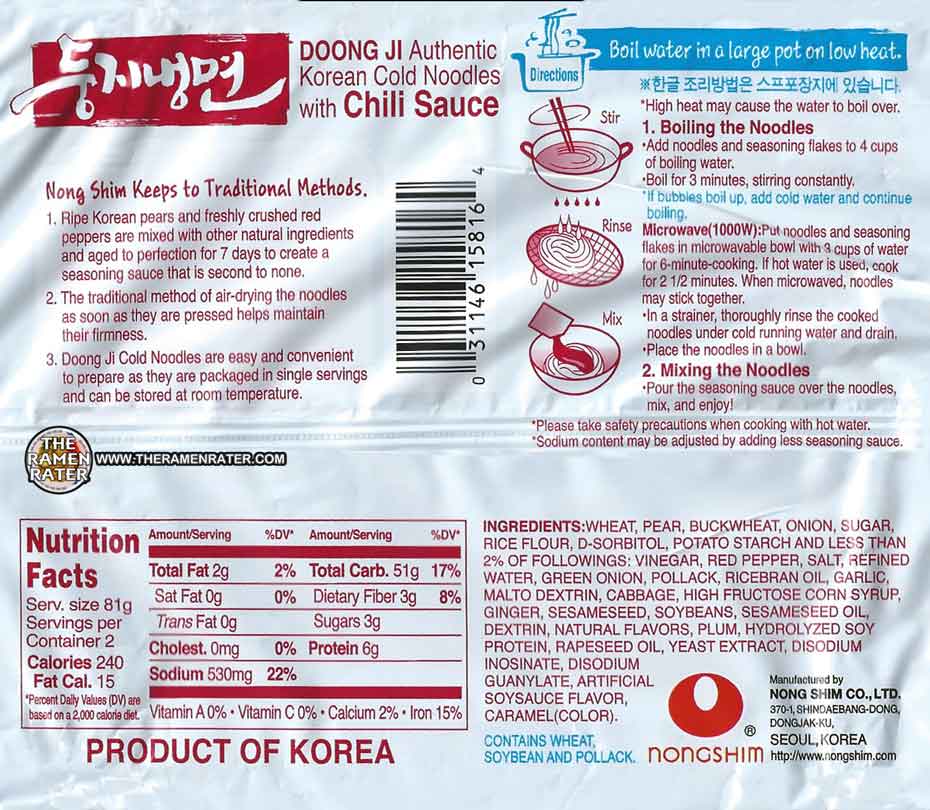 Here’s the back of the package (click image to enlarge). Contains wheat, soybean and pollock. 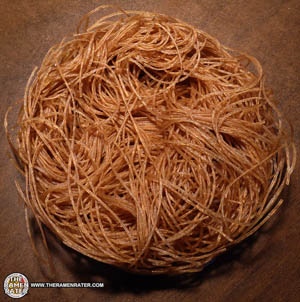 Buckwheat gives these noodles their dark brown color. Usually when you order naengmyeon, another cold noodle dish, it is served at a restaurant with a pair of scissors to cut the noodles into manageable lengths – works well here as well. 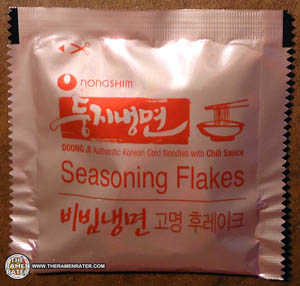 The veggies and solid ingredients. 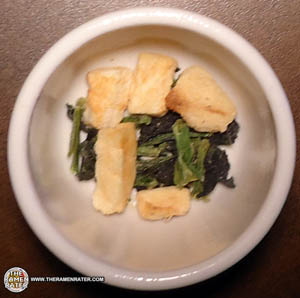 The larger bits are the Korean pear. 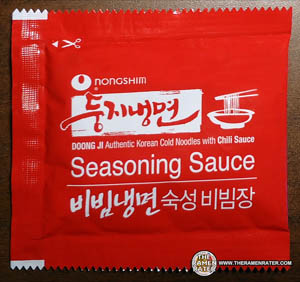 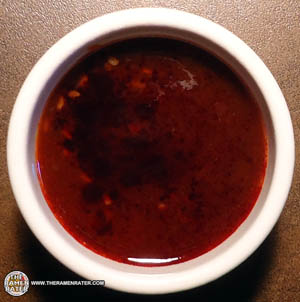 Nice color and a spicy scent. 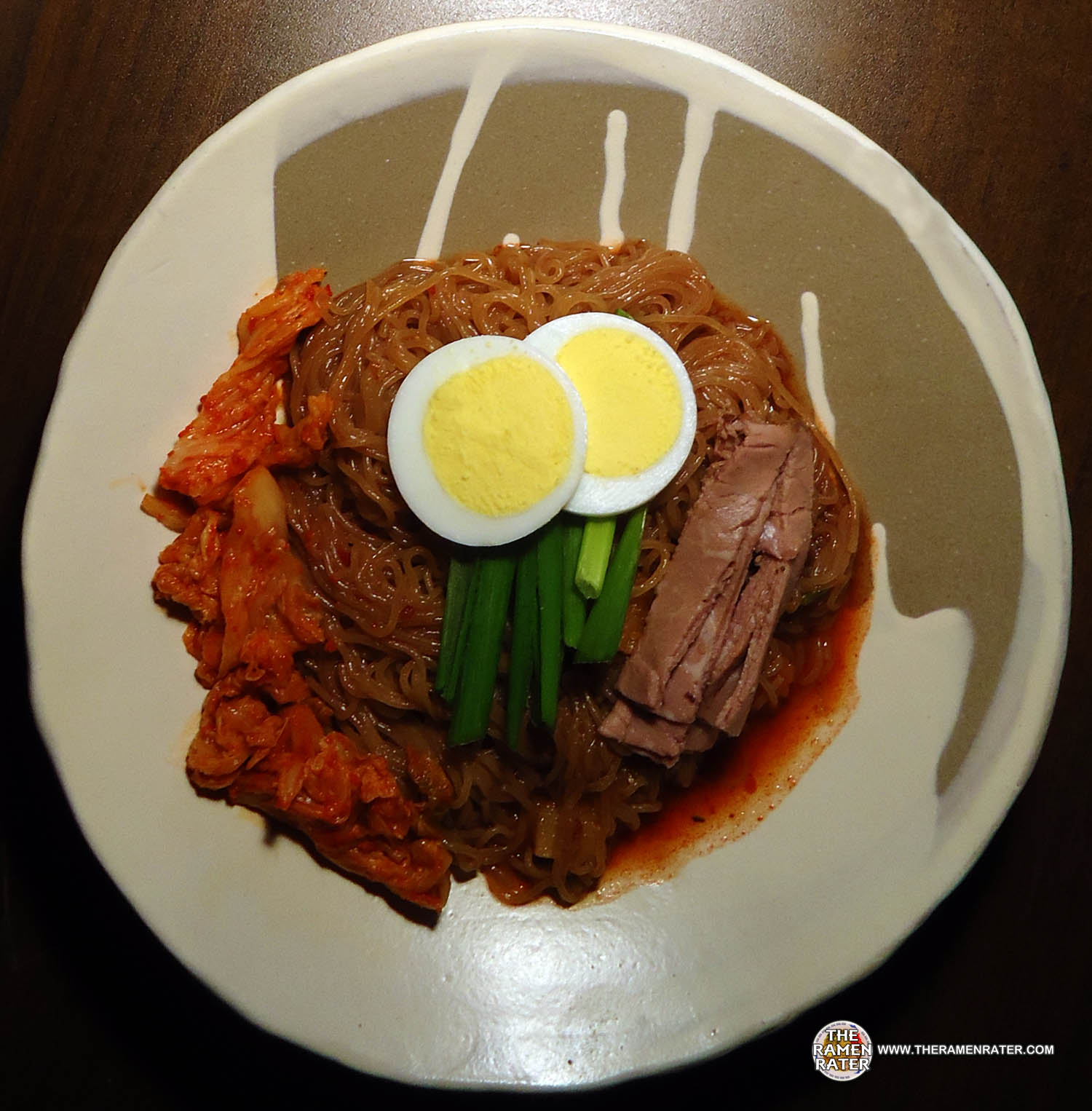 Finished (click image to enlarge). Added green onion, hard boiled egg, roast beef and a little sliced kimchi on the side. The noodles are nice – they have a chewiness you can only get from buckwheat and chillling them makes their texture tighten up – only words I can think to describe. The flavoring is great – spicy and slightly sweet – and there more than enough of the sauce to coat all the noodles. The pear is great too – chewy and flavorful. All in all quite nice! 5.0 out of 5.0 stars. UPC bar code 031146158164.