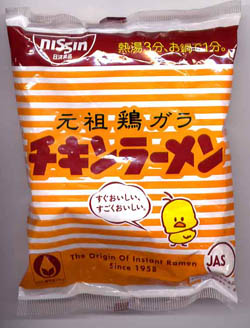 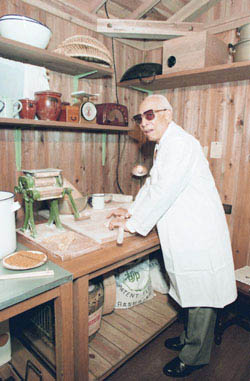 Today I was looking through a Wikipedia entry all about the creator of instant noodles, Momofuku Ando. Much to my surprise, I noticed that there is a day commemorating him called Momofuku Ando Day! What’s strange about this is that it was founded by some healthcare workers – at a  Dallas, Texas hospital!

What’s not so strange about this is why a day exists to honor the man.

Momofuku Ando was born into a rich Taiwanese family in 1910. His parents died when he was young and he spent most of his youth in the care of his grandparents who ran a textile business.He started his own textile business in Taiwan during the 30’s. After World War II, he moved to Japan and took the Japanese name Momofuku Ando (his birthname was Chinese – Wu Pai-fu).
Things didn’t go so well for him in Japan – after becoming a Japanese citizen, he was sent to jail for two years for tax evasion. His business was lost.
After jail, he didn’t give up. He started a new business in Osaka, Japan that produced salt.
Times were hard in Japan after World War II. The Japanese were told by their government that they should eat bread made from wheat flour that was supplied by the United States. Noodles wre the standard fare of Japanese folks and Ando saw an opportunity here. Why wouldn’t they want to eat noodles instead of bread? The government insisted that the companies that made noodles were too small to supply everyone.Ando decided that he would try to fill the demand. He is quoted as saying, “Peace will come to the world when the people have enough to eat.”
After a lot of hard work, 1958 proved a good year with the first instant noodles to be invented. Simply called Chikin ramen, they were a little pricy when they came out. After a bit of time, they came down in price. Now they’re considered to be one of the cheapest foods you can get.

The holiday? Well, the folks at that hospital thought that such a motto, “Peace will come to the world when the people have enough to eat” was great – they found Momofuku Ando’s contribution of a cheap, easily prepared footstuff for the people of the world was deserving of recognition. So on that day, they would conduct fundraisers and donation drives for those without food and in need.

I think that’s pretty awesome – a Taiwanese guy whose parents die goes into the textile business in the footsteps of his grandparents, moves to Japan, is jailed, finds freedom again and begins a company that becomes synonymous with a full belly everywhere in the world and get a commemorative day from a Texas hospital!

It didn’t say why January 19th was the magic  Momofuku Ando Day’s date – here’;s what it does say:

Momofuku Ando Day was established January 2007 at a small hospital in Dallas, Texas. Recognizing the genius life of the man whose product has fed millions, a group of healthcare workers first celebrated the day on January 19, 2007. Each participating employee brought several packages of favorite ramen flavors to a banquet table from which employees could sample. The second year, January 2008, participating employees developed unique dishes using ramen as the prime ingredient. The Day also kicked off the “It Starts With Me” campaign promoting charitable giving and customer service. Unfortunately, the hospital was corporately closed in June 2008. In January 2009, several of the transferred employees continued Momofuku Ando Day by sharing it with their new coworkers at a sister facility. Understanding that ramen has been a staple food for victims of disaster and the poverty-stricken, as well as for college students and those wanting a quick meal, Momofuku Ando Day became an endeavor to help feed those in need by fundraising for charitable organizations, or simply calling attention to poverty or hunger through ramen or food donations to local food banks and free meal kitchens. The day has since been celebrated the second Friday of January to allow Mr. Ando due recognition. (Wikipedia)

I think January 19th, 2012 should be celebrated as Momofuku Ando Day. If I had some Chikin ramen I’d review it, so I think I’ll have to do something a little less authentic. But yeah – MOMOFUKU ANDO DAY 2012! Sounds like a plan. Spread the word! Eat some instant noodles and be charitable towards your fellow being!!!

Here are some links:

A video about the Momofuku Ando museum in Japan.

The Cup Noodle museum. I don’t know but I would be way more excited than this guy is!

This is pretty bizarre.