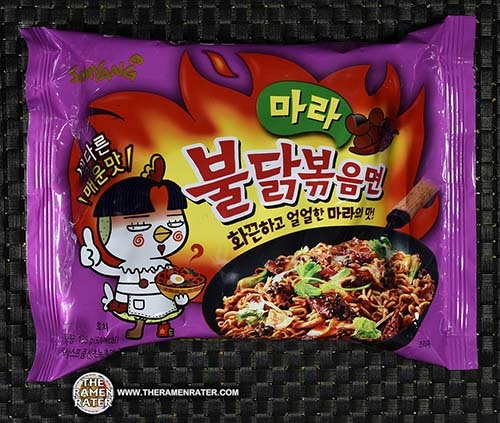 Thanks go to Amelia from Samyang Foods in South Korea for sending these along! The Buldak Bokkeummyun line from them is a fiery range which starts with their hot chicken flavor of Fire Noodle Challenge fame. Here’s what they have to say about this one –

This ‘numbing’ kind of heat comes straight from Sichuan peppercorns. Here’s a little about Mala sauce from Wikipedia –

Mala sauce is a popular oily, spicy, and numbing Chinese sauce which consists of Sichuanese peppercorn, chili pepper and various spices simmered with oil. Regarded as a regional dish for Chongqing cuisine and Sichuan cuisine, it has become one of the most popular sauces in Chinese cuisine and spawned many regional variants. The term málà is a combination of two Chinese characters: “numbing” (麻) and “spicy (hot)” (辣), referring to the feeling in the mouth after eating the sauce. The numbness is caused by Sichuan pepper, which contains 3% hydroxy-alpha-sanshool. The recipe often uses dried red peppers that are less spicy than bird’s eye chili, which is widely used in Southeast Asian cuisines.

The precise origins of the dish are unclear, but many sources attribute its development to night markets in Chongqing that targeted pier workers in the 19th to 20th century.[1] The strong flavour and thick layer of oil helps preserve foods and removes the unpopular smells of the cheap foods, such as solidified blood, beef stomach and kidney, which were usually served to pier workers. Despite the strong flavour by itself, various dipping sauces are often served to make the texture of cooked meat smooth and oily, and the tastes more complicated.

I must admit although kind of logical, I wasn’t expecting this flavor. This could be a great one for the Chinese market actually – Taiwan too. Well, let’s start the fire! 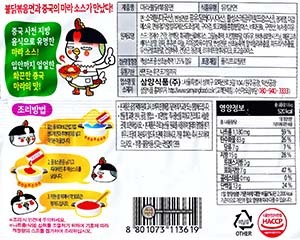 Here’s the back of the package (click to enlarge). Looks to be meat free but check for yourself. To prepare, add noodle block and dry sachet to 600ml boiling water and cook for 5 minutes. Drain, saving 120ml liquid. Add in sauce and saved liquid. Stir-fry over high heat for 30 seconds. Stir and enjoy! 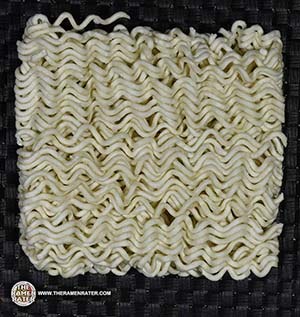 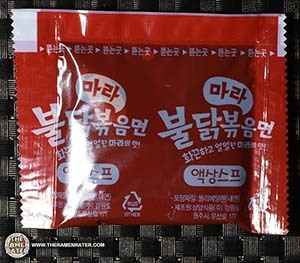 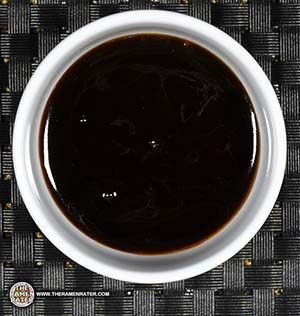 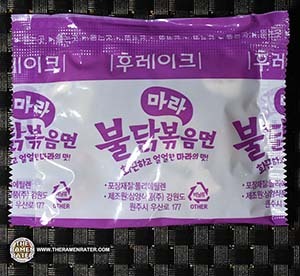 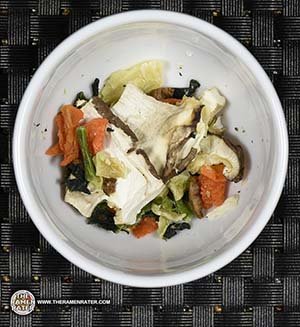 Not sure what all we have here but looks like maybe mushroom, carrot and TVP? 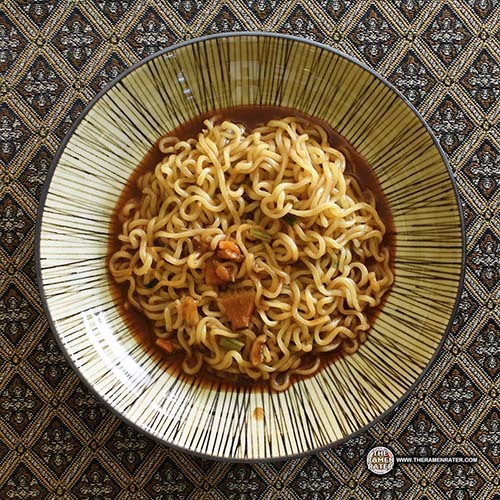 Finished (click to enlarge). The noodles are plump and chewy. They are the perfect vehicle for the sauce. The flavor on this one is fiery, with a nice Sichuan pepper drop in there. I expected more Sichuan pepper, but it really works well. The flavor is a bit different too; hard to describe – maybe some soy? The bit of mushroom were ubiquitous and of nice quality. A fiery feast to Melt your face! 3.75 out of 5.0 stars. EAN bar code   8801073113619.

Here I give this a try – check it out