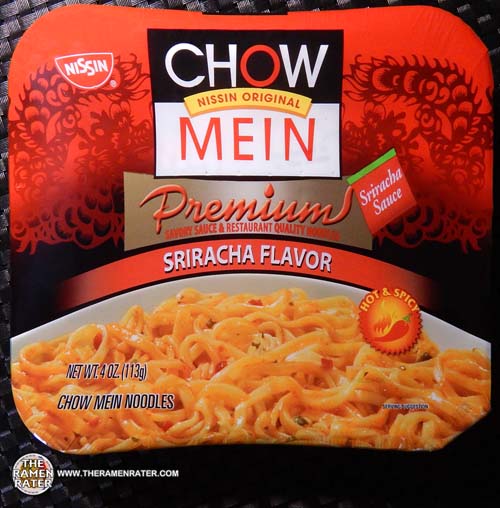 Here’s a new one from Nissin Foods USA – Sriracha flavor Chow Mein! Sriracha is kind of interesting. First, the way to pronounce is ‘sir-racha’ drove me nuts for the longest time, but I finally have conformed (under protest). Also, Sriracha is a place in Thailand (went there in May), however the Sriracha sauce me know here in the states isn’t a popular condiment there. It’s a bit of a mystery wrapped in an enigma. Wikipedia had this to say:

listen)) is a type of hot sauce or chili sauce made from a paste of chili peppers, distilled vinegar, garlic, sugar, and salt.[1] It is named after the coastal city of Si Racha, in Chonburi Province of eastern Thailand, where it may have been first produced for dishes served at local seafood restaurants.[2]

Okay I got that.

In Thailand the sauce is most often called sot Siracha (Thai: ซอสศรีราชา) and only sometimes nam phrik Siracha (Thai: น้ำพริกศรีราชา). Traditional Thai sriracha sauce tends to be tangier in taste, and runnier in texture than non-Thai versions.[7] In a Bon Appétit magazine interview, US Asian-foods distributor, Eastland Food Corporation, asserted that the Thai brand of hot sauce, Sriraja Panich, which Eastland distributes, is the original “sriracha sauce” and was created in Si Racha, Thailand, in the 1930s from the recipe of a housewife named Thanom Chakkapak.[7]  Within the United States, sriracha is associated with a sauce produced by Huy Fong Foods[2] and is sometimes referred to as “rooster sauce” or “cock sauce”[8] due to the image of a rooster on the bottle.[9] Other variations of sriracha have appeared in the US market, including a sriracha that is aged in whiskey barrels.[10][11] Various restaurants in the US, including Applebee’s, P.F. Chang’s, Taco Bell, Pizza Hut, Jack in the Box, Subway, White Castle and Gordon Biersch, have incorporated sriracha into their dishes, sometimes mixing it with mayonnaise or into dipping sauces.[2][12][13][14][15] The name “sriracha” is considered to be a generic term, since the creator of the Huy Fong Foods sauce, David Tran, did not trademark it.[16]

Now one thing that’s for sure is that in the USA, Sriracha sauce is commonly aligned with Vietnamese foods, most notably pho noodles. On most bottles you’ll see here, there’s no Thai on them at all. Trippy. Anyways, let’s see what kind of heat’s in this tray from Nissin Foods! 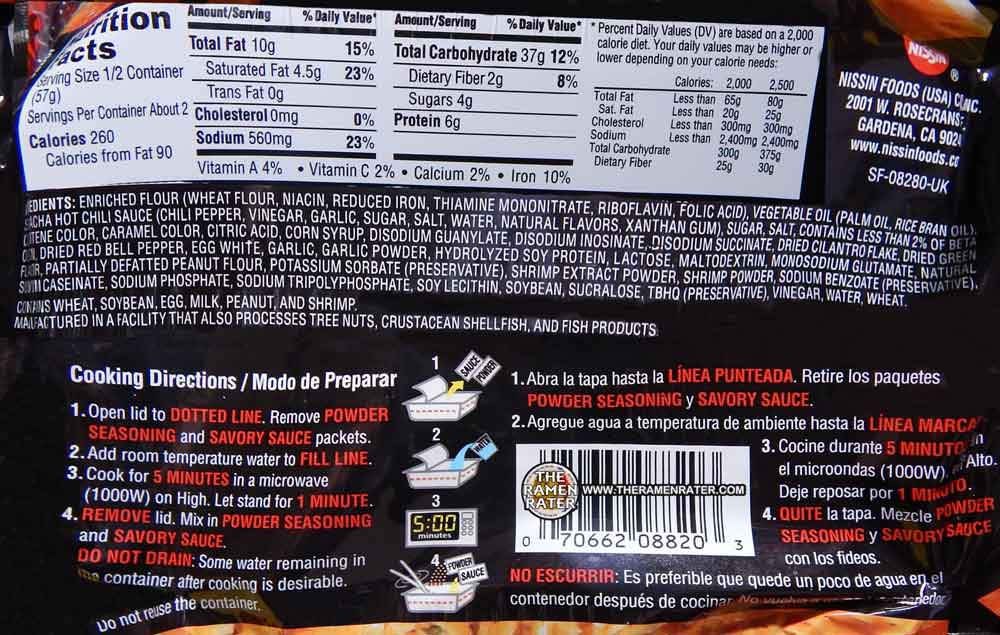 Here’s the underside of the package (click image to enlarge). Contains shrimp. To prepare, open lid to dotted line and remove sachets. Add room temp water to fill line and microwave for 5 minutes. Let sit in the microwave for another minute, then remove the lid and add in sachet contents. Stir and enjoy! 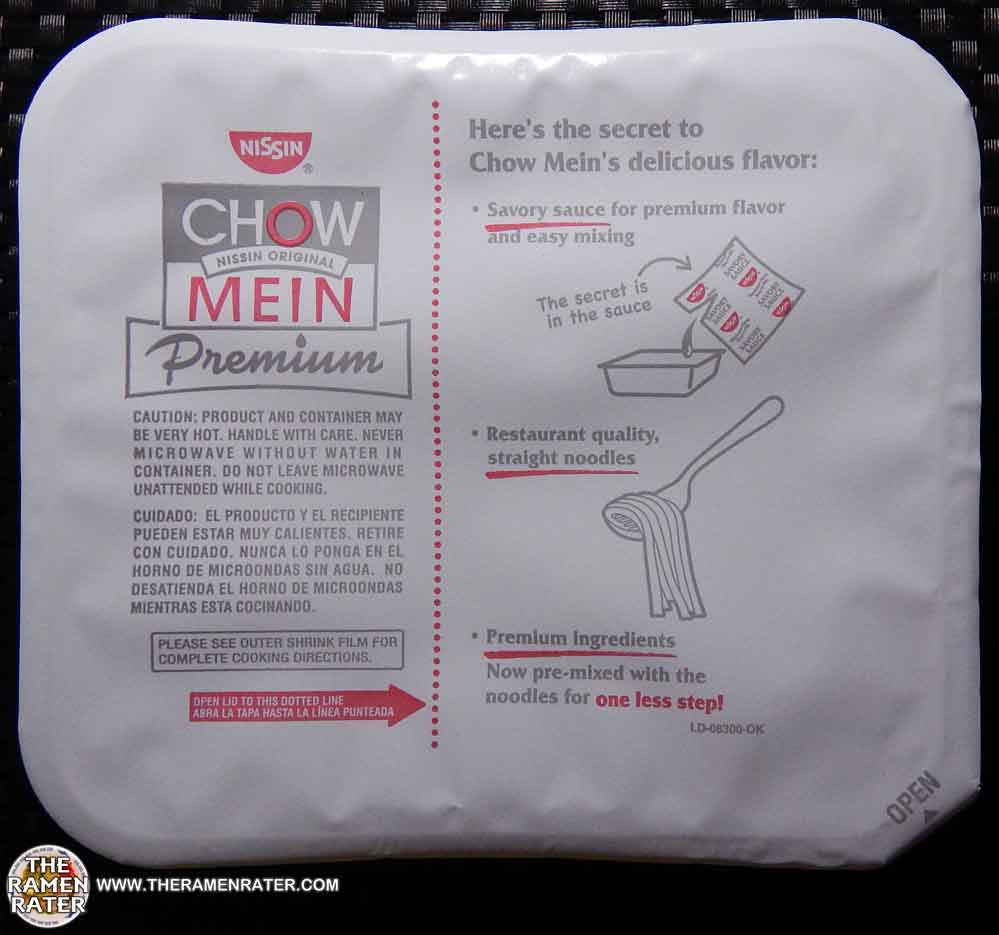 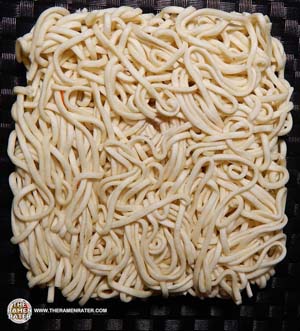 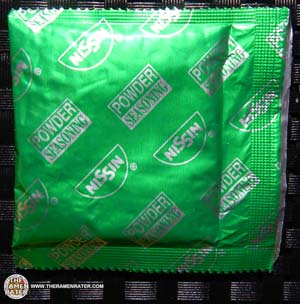 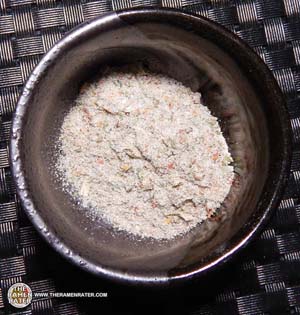 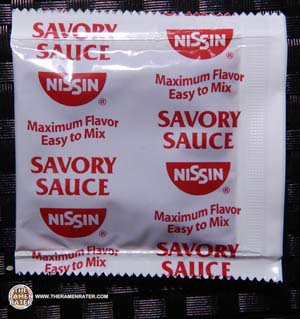 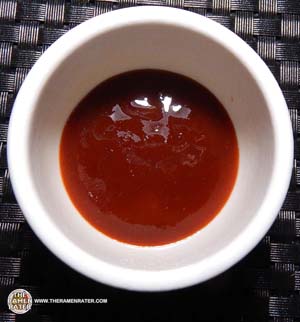 Has a sriracha and soy scent. 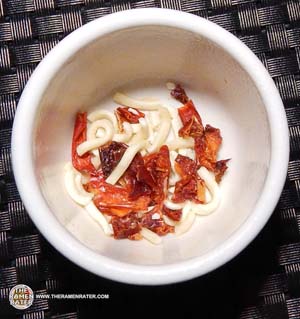 From under the noodle block, some bits that look a lot like Thai chillies. 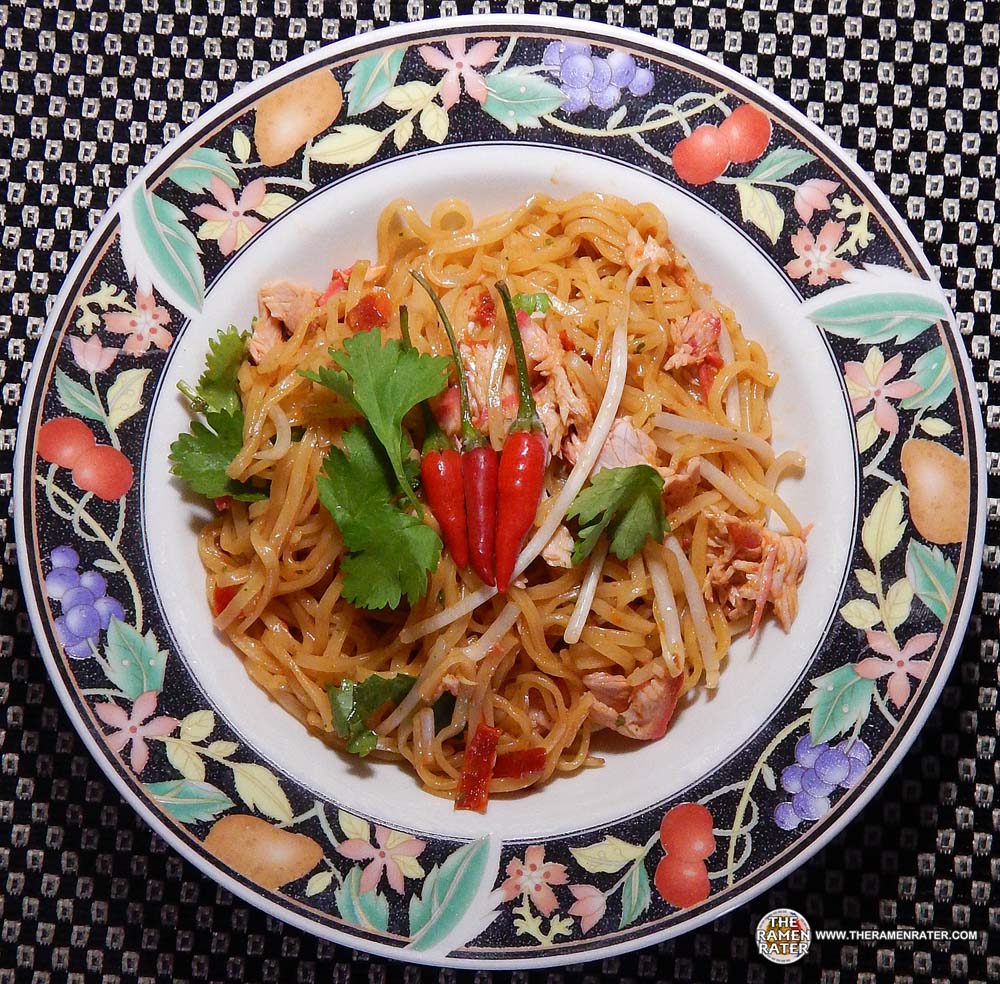 Finished (click image to enlarge). Added barbecue pork, Salad Cosmo bean sprouts, coriander and Thai chillies. The noodles came out great – lots of them and they have a flat and slightly wide disposition. Good texture and chew. The seasoning lends itself well to the noodles. It’s flavor is like a sweet and spicy Thai kind of thing which packs a good amount of heat. It is very reminiscent of gochujang and topokki sauce – both South Korean things I like immensely. The bits of pepper hydrated well. Altogether a nice dish. 4.25 out of 5.0 stars.  UPC bar code 070662088203.