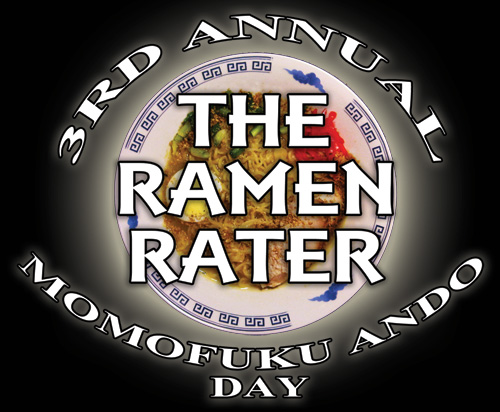 Today is January 19th, 2014 – and you know what that means? Momofuku Ando Day! In 1958, Momofuku Ando invented the very first instant noodles and started Nissin Foods. I do a special video every year to commemorate the occasion (see below). First, here’s what the Nissin Foods USA website has to say about the man:

Nissin founder, Momofuku Ando, has always instilled a sense of commitment and quality in Nissin products. Today, Nissin’s corporate philosophy inspires this same commitment to taste, convenience, and quality. Mr. Ando began the company as part of a humble family operation back in 1948. Faced with sparse food sources after World War II, Mr. Ando realized that a quality, convenient ramen product would help to feed the masses. His goal was to create a satisfying ramen that could be eaten anywhere, anytime. In 1958, Nissin introduced “Chicken Ramen”, the first instant ramen. Ironically, it was considered a luxury item, since Japanese grocery stores sold fresh Japanese noodles (udon) at one-sixth the cost of Mr. Ando’s new food concept.

Still, Mr. Ando was convinced that his revolutionary new method of preparation would sell. The concept seemed simple enough. All users would have to do is simply remove the ramen from its package, place it in a bowl, add boiling water, cover the bowl, and wait three minutes. The conservative Japanese food industry, however, rejected the product as a novelty with no future. They had never been so wrong.

Soon, Chicken Ramen was selling beyond even Mr. Ando’s wildest expectations. Before you could say “instant”, more than ten companies were rushing to put their own versions out on the market. By the end of 1958, grocery shelves were crowded with this new staple for the Japanese kitchen. From this point on, Nissin Foods began introduction of a long list of successful and innovative ramen products.

Today, there are hundreds of instant noodle manufacturers in the world, creating new varieties of every flavor imaginable!

You may be wondering: why January 19th? Here’s what Wikipedia had to say about Momofuku Ando Day:

Momofuku Ando Day was established January 2007 at a small hospital in Dallas, Texas. Recognizing the genius life of the man whose product has fed billions, a group of healthcare workers first celebrated the day on January 19, 2007. Each participating employee brought several packages of favorite ramen flavors to a banquet table from which employees could sample. The second year, January 2008, participating employees developed unique dishes using ramen as the prime ingredient. The Day also kicked off the “It Starts With Me” campaign promoting charitable giving and customer service. Unfortunately, the hospital was corporately closed in June 2008. In January 2009, several of the transferred employees continued Momofuku Ando Day by sharing it with their new coworkers at a sister facility. Understanding that ramen has been a staple food for victims of disaster and the poverty-stricken, as well as for college students and those wanting a quick meal, Momofuku Ando Day became an endeavor to help feed those in need by fundraising for charitable organizations, or simply calling attention to poverty or hunger through ramen or food donations to local food banks and free meal kitchens. The day has since been celebrated the second Friday of January to allow Mr. Ando due recognition.

Personally, I think Momofuku Ando Day should be on the 19th. Why? Well, it’s easier to remember and just seems more respectful to be honest. Any way you slice it, his invention changed the world we live in and he definitely should get recognition!

Here’s my annual Momofuku Ando Day video! This year, I demonstrate the recipe my mom used to make me when I was a kid and ultimately the reason I started reviewing instant noodles.