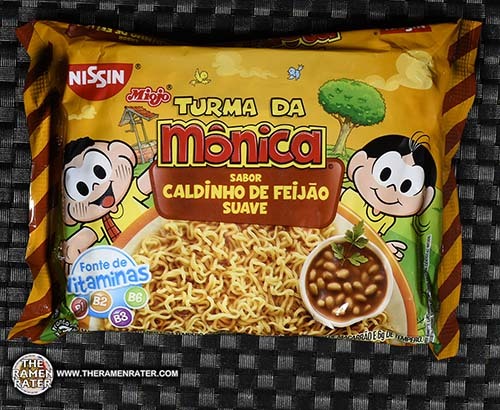 Today’s variety comes by way of Daniel from Brazil – thanks again! First, let’s explain what this is exactly. So let’s start with the characters – Wikipedia, if you please –

The series was originally based on a newspaper comic strip in which the protagonists were Blu (Bidu) and Franklin (Franjinha), launched by the newspaper Folha da Manhã in 1959.[2] Over the years the series has been gaining a large audience, with new characters constantly being added to the lineup. Jimmy Five (Cebolinha) and Monica (Mônica) were eventually given their own comic books, hence the title “Monica’s Gang.” The characters and comics were eventually adapted into cartoons, video games, movies, theme parks and a wide range of products.[3]

The stories revolve around the adventures of Monica and her many friends in a fictional neighborhood known as “Lemon Tree” (Bairro do Limoeiro in the original version) in São Paulo. The neighborhood was inspired by the neighborhood of Cambuí, in Campinas and the city of Mogi das Cruzes, where de Sousa spent his childhood.[4] However, the comic books do not simply revolve around the stories of Monica and her friends. Other characters created by de Sousa include Chuck Billy ‘n’ Folks, Tina’s Pals, Lionel’s Kingdom and Bug-a-Booo.

Monica’s Gang was published by Abril and Globo and has been published by Panini Comics since 2007. In 2008 a spin-off series, Monica Teen, was created in a manga style and features the characters as teenagers.

Okay, now for the flavor. This looks to be a kind of bean soup – maybe red bean soup (or stew?) – which sounds very different. Daniel mentioned if I remember correctly that it’s a little thick. Let’s give it a go! 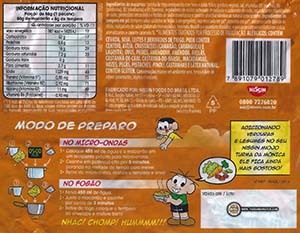 Here’s the back of the package (click to enlarge). To prepare, add noodle block to 450ml boiling water and cook for 3 minutes. Add in sachet contents. Finally, stir and enjoy! 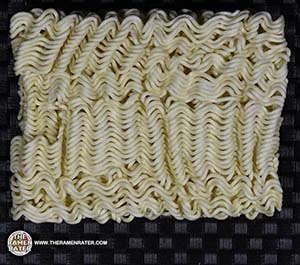 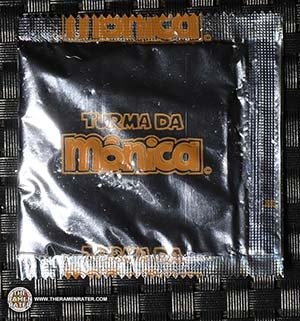 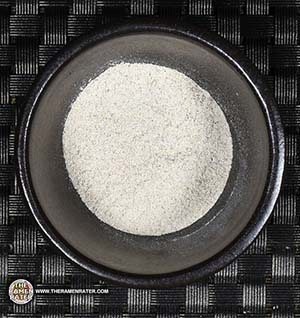 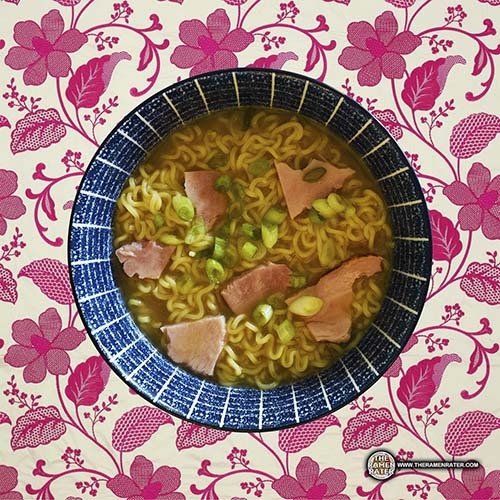 Finished (click to enlarge). Added ham and scallion. The noodles came out nicely. A well engorged soft but not too soft standard instant. The broth was a nice pair as it had a slight thickness of it’s own – very slight. But it did taste like a bean soup, albeit thinner than most I’ve tried. It did impart the flavor well if not the texture. One of the more unique instant varieties I’ve ever had – was tasty. 3.75 out of 5.0 stars.  EAN bar code  7891079012789.

An older spot for the Turma De Monica tie-in