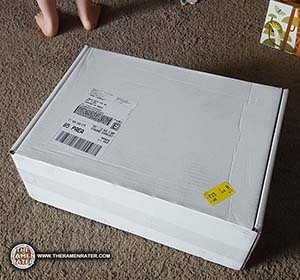 I saw an article mentioning a new product from Nissin Foods America which focused on a lot of vegetables and thought ‘it’s about time.’ I’ve had a ton of instant noodles in my time and honestly very rarely have I been satisfied with the amount of vegetables in them. I dropped a line to my contact over there and boom – a day later here are samples. Let’s see what’s in this box! 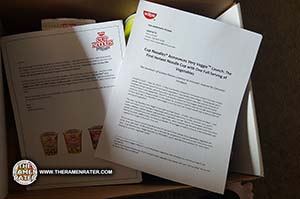 Some papers came with it – a press release and a letter – check it out here. 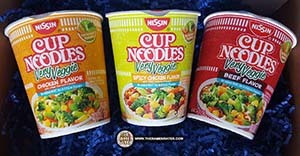 Here are the cups (click to enlarge). Once cooked up they contain a half cup of vegetables! Not only that, these can be microwaved. You may have seen a previous post with this style of cup – they tested them out at Walmarts for a while. They’re more eco-friendly. I’m going to put a rush on reviewing these – should see them all in the next three weeks. 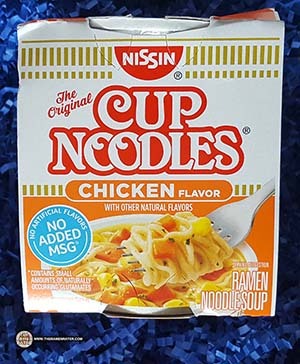 Here we have (click to enlarge) the original Cup Noodles Chicken. Well, not the original actually they changed the recipe last year. But it’s the new version of the one pretty much everyone has tried. Thank you very much!