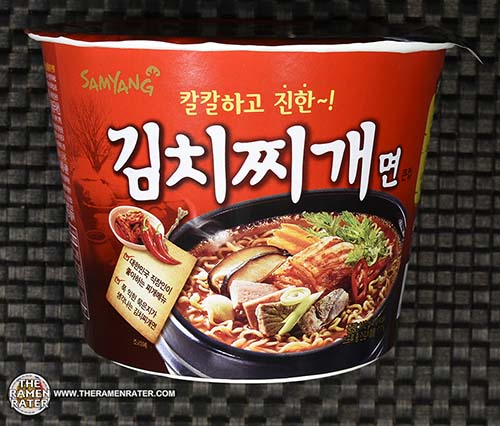 Here’s one Samyang Foods sent me recently – thank you! It sounds good to me, but I know one person who would not like this. My son Andy really doesn’t like kimchi. Oh yeah – my friend Matt B. doesn’t like it either – in fact, I opened a big jar of it and tried to get him to taste it, but when he smelled it when opened. He recoiled and started yelling. I dunno why; I think its good! Here’s a little about it from Wikipedia –

Kimchi (English pronunciation: /ˈkɪmtʃi/, from Korean: 김치; gimchi [kim.tɕʰi]), a staple in Korean cuisine, is a traditional banchan (side dish) made from salted and fermented vegetables, most commonly napa cabbages and Korean radishes, with a variety of seasonings including gochutgaru (chili powder), scallions, garlics, ginger, and jeotgal (salted seafood) among others.[1][2] There are hundreds of varieties made with different vegetables as the main ingredients.[3][4] In traditional preparations, it was stored underground in jars to keep cool, and unfrozen during the winter months.[2] These days, refrigerators are used instead.

Pickled radish slices make a good summer side-dish,
Radish preserved in salt is a winter side-dish from start to end.
The roots in the earth grow plumper everyday,
Harvesting after the frost, a slice ct by a knife tastes like a pear.

Kimchi is a national dish of both North and South Korea. During South Korea’s involvement in the Vietnam War its government requested American help to ensure that South Korean troops, reportedly “desperate” for the food, could obtain it in the field;[35] South Korean president Park Chung-hee told U.S. President Lyndon B. Johnson that kimchi was “vitally important to the morale of Korean troops”.

Okay so now that you know a lot more about kimchi than you did a couple minutes ago, here’s a bowl of ramyun from South Korea!

Detail of the side panels (click to enlarge). Unsure whether this one contains meat – check for yourself. To prepare, add sachet contents and boiling water to fill line. Let steep for 4 minutes. Finally, stir and enjoy! 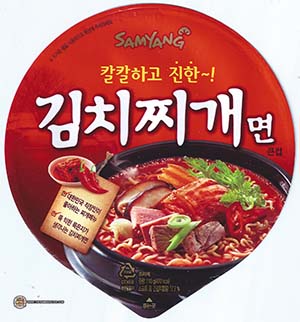 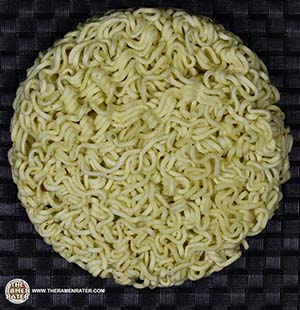 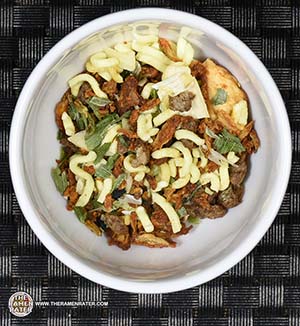 Loose bits from inside the bowl. 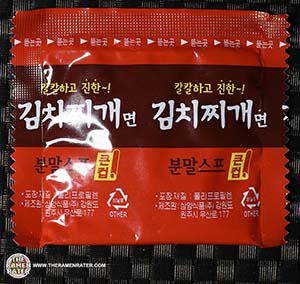 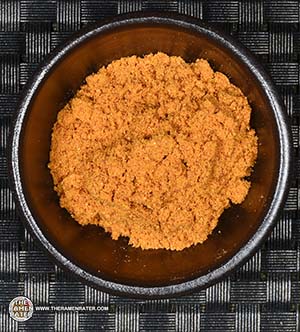 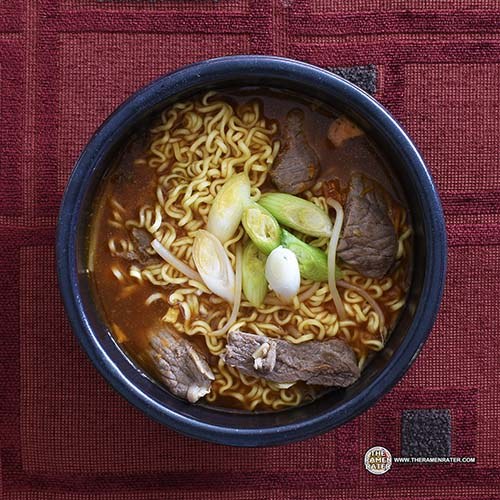 Finished (click to enlarge). Added Salad Cosmo mung bean sprouts, beef and spring onion. The noodles are decently thick and with a very nice character. The broth has a very bright vegetable flavor to it with a nice spiciness. The broth has a little thickness to it. Moreover, the included vegetables and kimchi hydrate well and a nice combination. 4.0 out of 5.0 stars. EAN bar code 8801073211070.

A recipe for the package version.