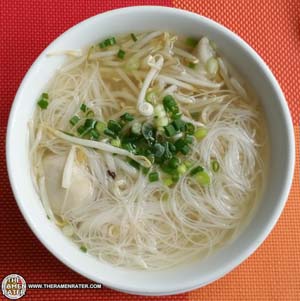 Came down to have a last try at the breakfast buffet. I’d been putting off the noodles but I figured I’d kick myself if I didn’t give them a try before I left. Good stuff! 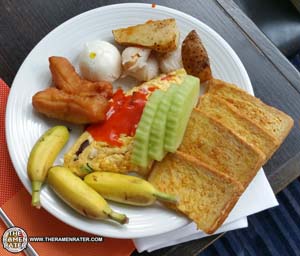 A little of everything before I go. 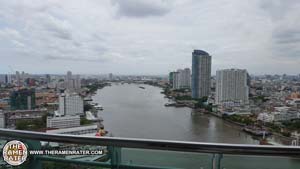 I took this photo right when we were leaving our corner suite for the last time. The view of Bangkok was addicting; wish I could’ve taken it with me as more than a photo. I think we’ll be back someday though. 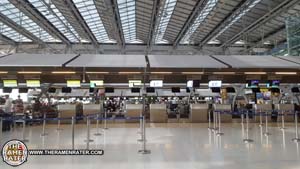 Last night at the farewell dinner, I met the guy who accompanied us to the airport. Mr. Yatra had spent some time working in the Seattle area which is very near to where I live. He told me his favorite place to eat was a restaurant called Tai Tung – a place I’d been years back as a kid. Upon dropping us off at the airport he bid us a kind farewell, reminding me ‘hey don’t forget – go to Tai Tung!’ Mr. Banks also gave me a call before we left to bid farewell which was really nice of him. Really going to miss all the people we met. We went and checked our bags and then went through security. 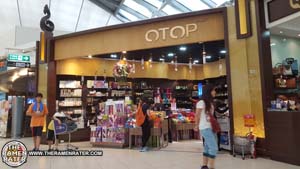 We had a good amount of time to kill before our flight, so it was a perfect time to do some shopping. Found a lot of really neat stuff and stuffed my carry on. I even got one of those little cats that wave – maneki neko – at a ramen shop! 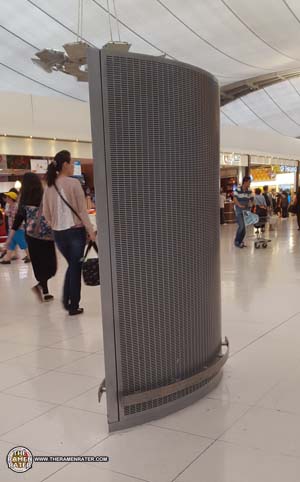 This is the most wonderful thing ever. It’s a superpower air conditioner! They’re all over the place at the airport in Bangkok and some had little wifi antennas and had speakers with flight info and announcements. 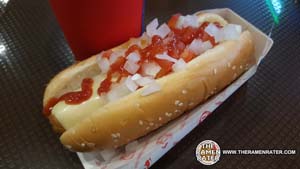 A hot dog? Yes, a hot dog. Some fast food sounded good and we hit Dairy Queen. Yes, they have Dairy Queen in Thailand. Dairy Queen, Pizza Hut, KFC, Domino’s and Burger King. I’m sure McDonald’s was lurking somewhere as well – but no Taco Bell! I think what was interesting was the presence of sesame seeds on the bun. 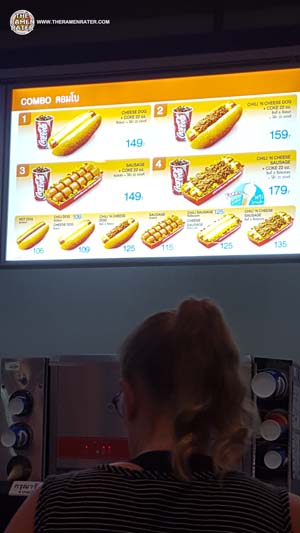 A pic of the overhead menu. 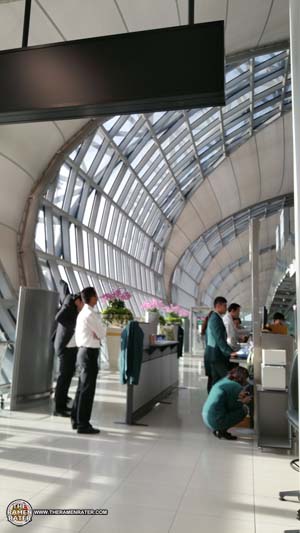 So when it was time, we went to our gate and waited. And waited. And waited. It was very close to boarding time and nobody showed up to open the gate. Everyone was looking at eachother a little confused. My sister went and tried to find info. Well, EVA Air didn’t feel like letting us all know that the gate was moved! So we ended up waiting here. 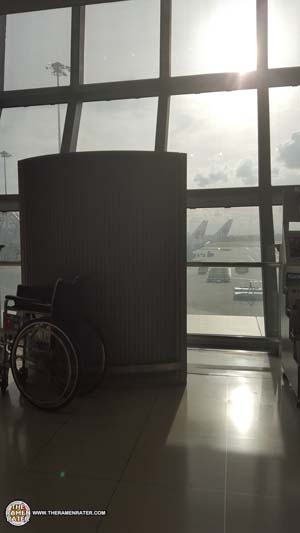 There was another air conditioner, but it wasn’t running… So eventually, they had everyone go to the left down a corridor – and onto the tarmac. We all got on a bus (hey wait – can we take a bus to Taipei?) and it took us down the airfield to a plane we boarded by stairs. Eventually, we took off. Now, the delay was pretty long. We were supposed to have about a 3 hour layover I believe in Taipei. Well, with the delay in Bangkok and then when we got to Taipei the pilot came on telling us we’d be circling since the airport was too busy – for 20 minutes! What was scary was that that announcement came up right when we were supposed to boarding our connecting flight! We eventually landed and just booked it as fast as we could through the checkpoint and to our gate. I figured worst case scenario, I do know a lot of instant noodle people in Taiwan, so all might not be so horrible if we end up having to wait for another flight. Well, we ran ran ran through Taoyuan airport and got to our gate. There we waited about an hour and got to board our plane. Phew!

The flight from Taipei to Seattle is a real brain-smasher. Our flight left Taipei around 11pm on the 20th. Then about 10 hour later, it arrived in Seattle at 7pm – on the 20th. But we finally arrived – got our bags, went rhgouh security (which was mind blowingly fast for US Customs) and we were off in our own direction – my sister to her car and I went and waited for my wife to pick me up. It was weird to be back; It’s a strange feeling; like Frodo Baggins after the long journey he took and then coming home, never looking at things the same way again. 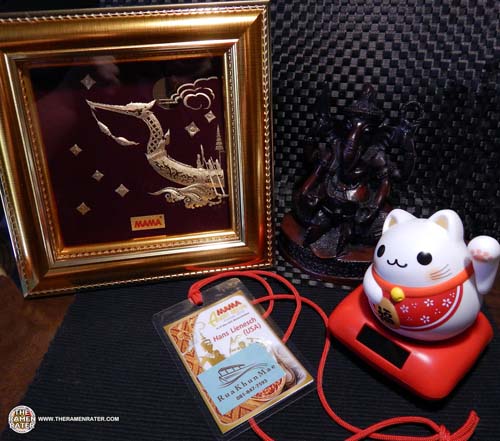 I must say I recommend everyone visit Thailand; the people, the sights, the everything. It’s so different from here. I loved it! I love being back though as my wife and I are starting our next big adventure with a new baby on the way this summer. I want to thank my sister for accompanying me – if she hadn’t, I wouldn’t have been able to go. I want to thank everyone at Thai President Foods and President Rice products – everyone was so nice and kind to us. Also want to say thanks to all the great MAMA noodle distributor from Europe we had the fortune to meet – a great group of people! In conclusion, I would say that I found one thing in Thailand; harmony. Looking out the balcony way up high, I didn’t hear the sounds you might expect in a big US city – sirens and possibly gunshots or people yelling and honking. The traffic was crazy but it worked and people accepted that it was crazy. The way of the Thai is to give when you can, forgive transgressions and then to forget they even occurred. I think Western society could gain a great deal of insight from Thailand. Well, until my next adventure!