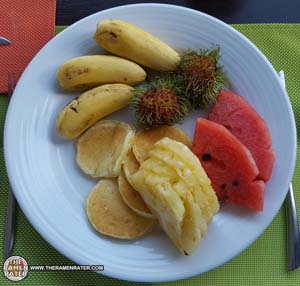 Another breakfast at the Chatrium Hotel. Like I said in a previous post, I love two things about Asia – fish and fruit. Tiny bananas rock and so does watermelon. I really liked their pancakes – they make them with white cake batter – they go awesome with pineapple! Then there were these weird things that were hairy looking. 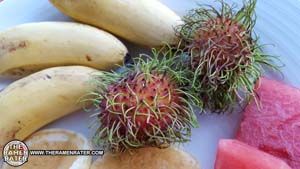 I couldn’t remember it was called Rambutan in the video, but here’s how you eat it! 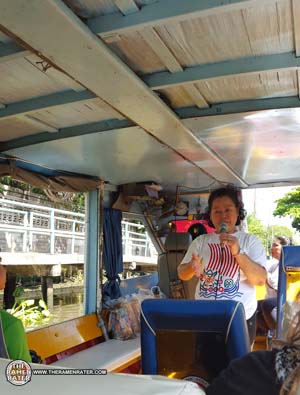 Then we all piled on these little boats and took a tour up the Chaophraya river and down some canals. Was great!

Here we go up one of the canals. Was really hot and humid but the breeze was nice. 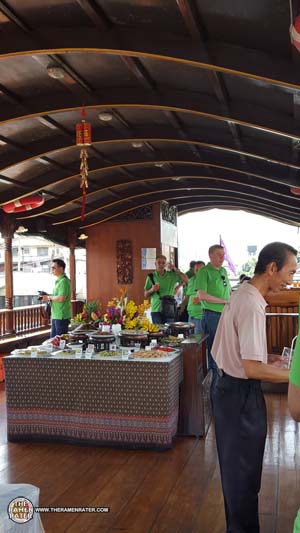 We disembarked down the river and then got on a barge where we all got to sample a ton of different fruit! 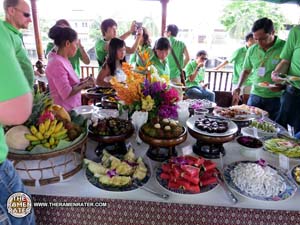 I mean a ton! The variety was just amazing. 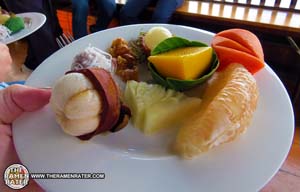 The light colored one with what looks like garlic cloves on the left is Mangosteen. Durian is considered the King of fruit – Mangosteen is considered the Queen. There’s also that leaf wrapped mango – it has sticky rice with it and is second to none. The large wedge on the right is pomelo. I also tried jackfruit, which I would liken to a distant ‘light’ cousin of durian. 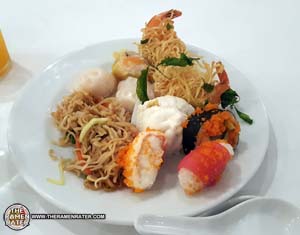 We then had a nice lunch – a lot of differed foods featuring a new variety of noodle called Mendake. It’s a non-fried noodle that doesn’t come with seasoning but is for those who want to make their own dishes. They had a little ‘build your ramen bar’ thing where you’d get some noodles, some broth and some roast duck and then top it with all sorts of different thing – very nice! The picture here has some sushi and some river prawn that were wrapped in the Mendake noodles and deep fried – worked very nicely! 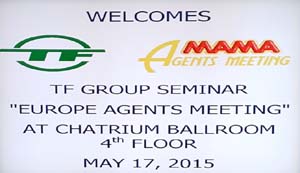 It was then time for the seminar! I was really excited to check this out. I find everything related to instant noodles fascinating – from the manufacturing to the development to the may they get from so far away to where they end up. 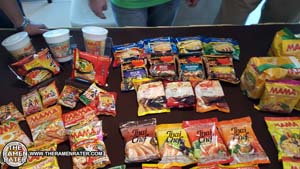 They had lots of display tables set up with all the lines by Thai Foods. This table fascinated me – they had varieties manufactured in Cambodia, Bangladesh, Hungary and Myanmar. I asked if there was any chance I could get some samples since each and every one you see here are varieties I’ve not reviewed. Sure enough, they were happy to oblige! I’ve been reviewing some of them as I’ve been doing this travelog! 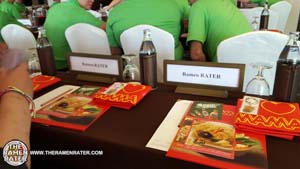 We were shown to our seats to see this – such an honor! Wow!

Ms. Pojjanee is the Vice President at Thai President Foods. She sent me an email just after New Year’s asking if I’d like to come to Thailand and take part in this event. It was an honor to be mentioned like this – both myself and my sister are very grateful to have been invited here – we were honored to meet you and everyone else and will never forget this epic voyage! 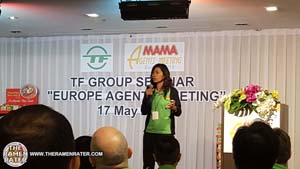 Ms. Pojjana also played a big role in our attending the event. When we were making arrangements, I mentioned that my son’s birthday was in a week after I returned so was hoping to find him something Pokemon related in Thailand or on the way there. During the welcome dinner, she brought me a big stuffed Pikachu to give him! Thank you!

I think my favorite part of the seminar was the talk Mr. Songphop gave on food quality, food fraud and other compliance topics. I am very interested in these topics and his speech made me feel like I was in college again. Wish I could take a class from him on it. There are a lot of food standards that factories strive to get – ISO-9001 for example. Do you know what ISO-9001 is? Look it up. Don’t be surprised if you see instant noodle packaging with it prominently labeled on the back. Standards like this mean that the factory where the foods are manufactured have been rigorously checked for quality, cleanliness and more. I think a lot of the stigma of the instant noodle’s quality would be assuaged if consumers knew what these standards meant. Therefore, I plan on doing a special post about these standards in the near future to help educate folks on the requirements to attain them in hopes of educating people why they are so important. Thanks for the inspiration Mr. Songphop! 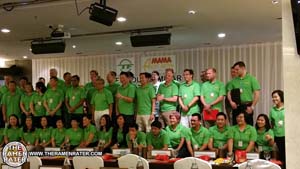 A group photo of everyone – I’m in the back! 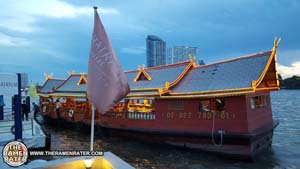 After a bit of time to relax, we all met down by where the earlier boat tour started from and boarded a dinner cruise! 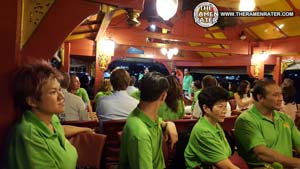 We got to check out a traditional dance and music! 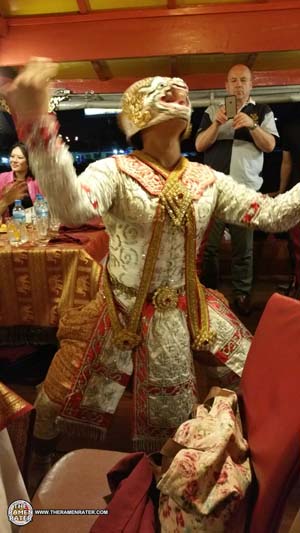 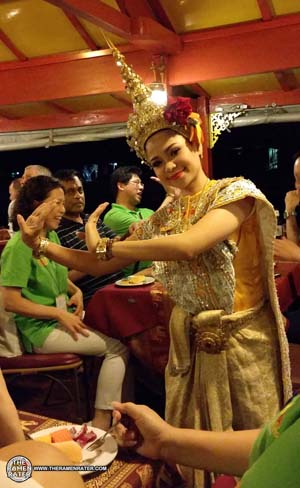 Here’s some video of the performance.

We ate wonderful corry, wrapped chicken in leaves and all things amazing. The views of Bangkok at night were amazing. Next stop was Asiatique. 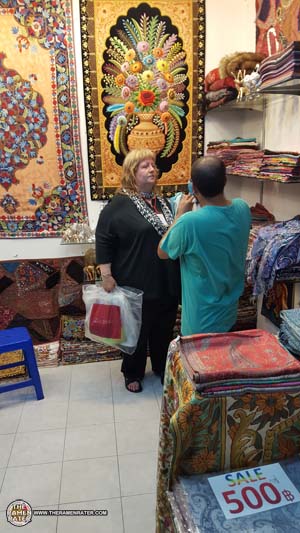 It was explained to me that Asiatique is a night market made up of old East Asia Company warehouses. Lots of things to buy! I looked everywhere to find placemats and found this guy who had something that would work. Our friend Mr. Banks encouraged us to haggle. My sister got cornered by him – he was very interested in selling her a scarf after she bought a tapestry. I’ll never forget when he tried to sell her a scarf and exclaimed ‘it is the natural color of the goat ma’am. It is the highest quality.’ His t-shirt said ‘I have absolutely no idea what you are talking about.’ Priceless. I found a few gifts to bring home and was quite happy with my haul.

We took tuk tuks to get back to the hotel. A tuk tuk has one wheel in the front and two in the back and disco lights and is a great experience – I had all I could do to keep myself whooping it up on the ride! That was really great! 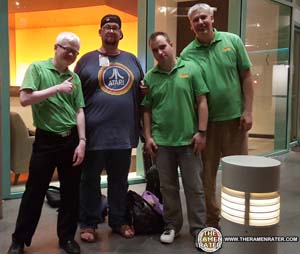 Mr. Songphop and the guys from the Hungarian factory had to get back to work tomorrow, so we had to say goodbye even through my trip was only half over – great bunch of guys! My sister arrived in her tuk tuk a minute later and we headed up to get some shuteye. Another amazing day in Bangkok.