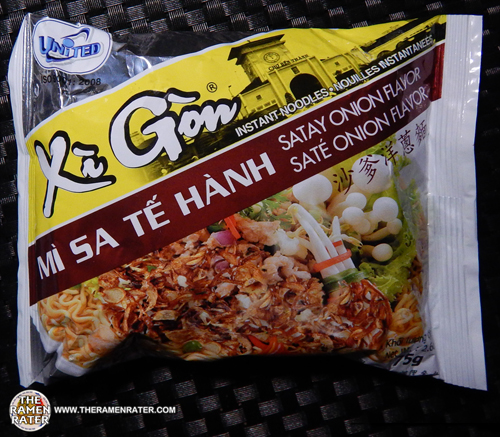 Here’s one of the ones sent by Marvin R. of Ft. Worth, TX – thanks again! So he originally asked me about identifying there. They look a lot like another Vietnamese brand, but the info on the back seems to show that it’s definitely not them. I’ve found in general that onion flavor is usually a good bet – but what about satay? Here’s what wikipedia has to say about satay:

Satay (/ˈsæteɪ/, /ˈsɑːteɪ/ sah-tay), modern Indonesian and Malay spelling of sate, is a dish of seasoned, skewered and grilled meat, served with a sauce.[1] Satay may consist of diced or sliced chicken, goat, mutton, beef,pork, fish, other meats, or tofu; the more authentic version uses skewers from the midrib of the coconut palm frond, although bamboo skewers are often used. These are grilled or barbecued over a wood or charcoal fire, then served with various spicy seasonings.

Sate Ponorogo being grilled in a foodstall inSurabaya, East Java,Indonesia

Satay originated in Java, Indonesia.[2][3][4] It is available almost anywhere in Indonesia, where it has become a national dish.[5][6] It is also popular in many other Southeast Asian countries, including Malaysia, Singapore,Brunei, Thailand, the Philippines, as well as in Suriname and the Netherlands, as Indonesia and Suriname are former Dutch colonies.

Satay is a very popular delicacy in Indonesia; the country’s diverse ethnic groups’ culinary arts (see Indonesian cuisine) have produced a wide variety of satays. In Indonesia, satay can be obtained from a travelling satay vendor, from a street-side tent-restaurant, in an upper-class restaurant, or during traditional celebration feasts. In Malaysia, satay is a popular dish—especially during celebrations—and can be found throughout the country. In Southern Philippines it is known as satti.

Close analogues are yakitori from Japan, shish kebab from Turkey and the Middle East, shashlik from the Caucasus, chuanr from China, and sosatie from South Africa. It is listed at number 14 on World’s 50 most delicious foods readers’ poll complied by CNN Go in 2011.[7]

Satay’s popular all over it seems! Let’s check out this satay onion variety from United of Vietnam! 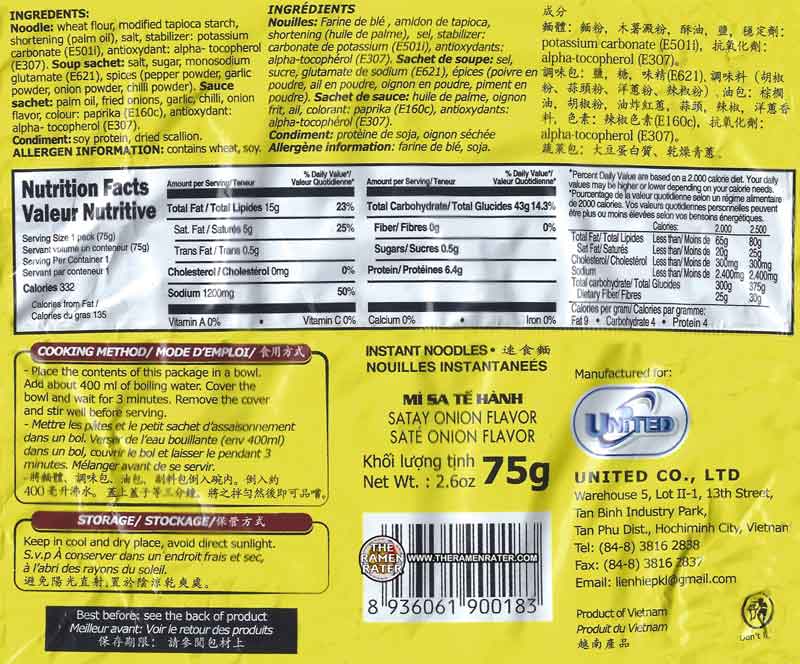 Here’s the back of the package (click image to enlarge). Looks to be meat free but check for yourself. To prepare, add noodle block and sachet contents to a bowl. Add 400ml boiling water and cover for 3 minutes. Stir and enjoy! 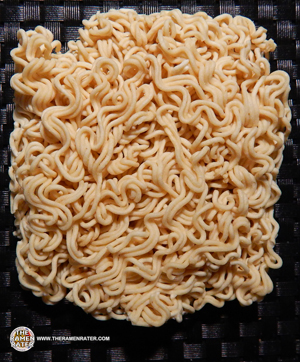 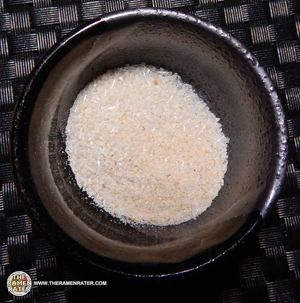 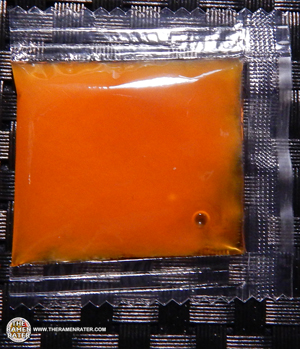 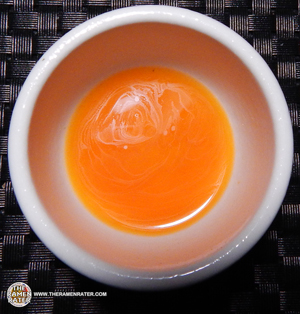 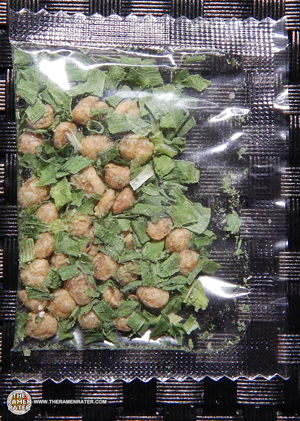 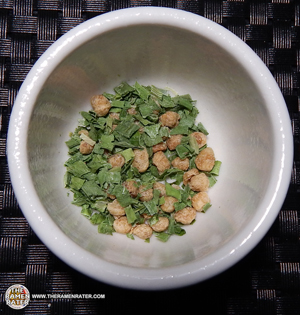 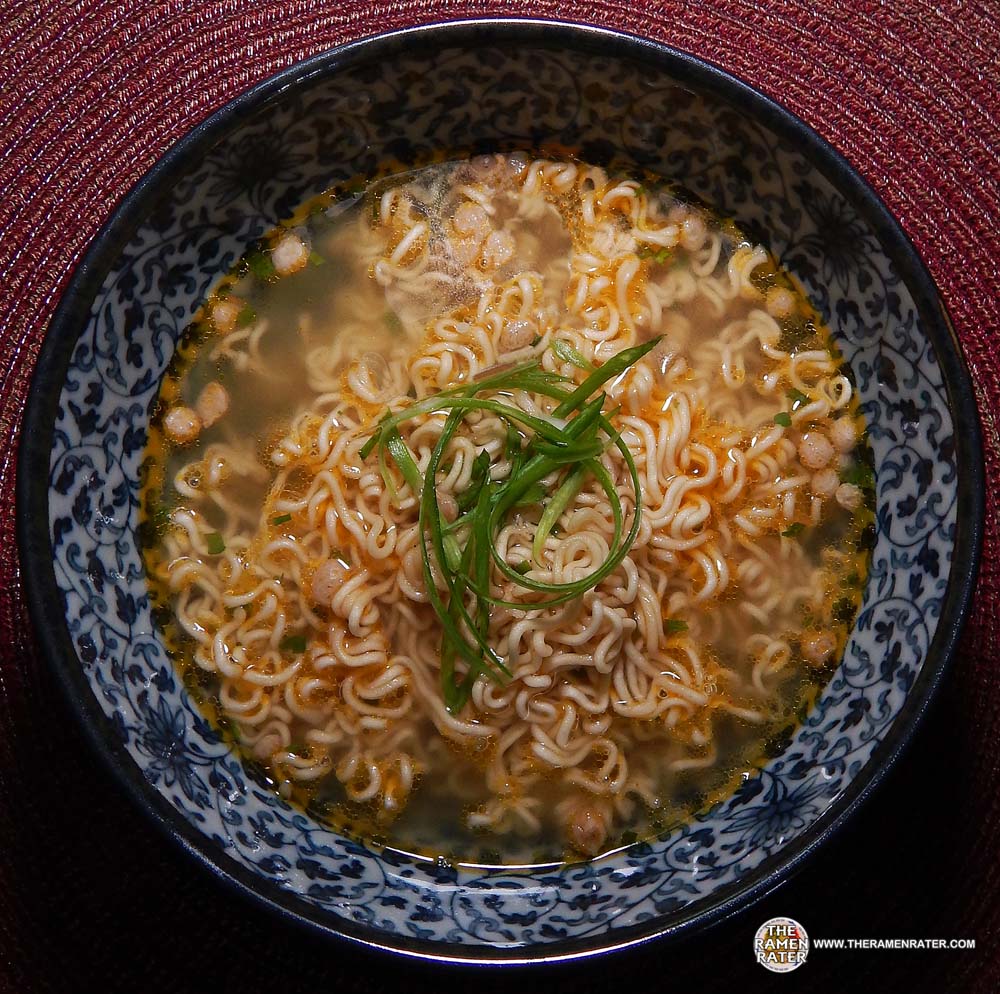 Finished (click image to enlarge). Added spring onion. The noodles had a crumble to them; not too much, but one that was evident. They had a texture I didn’t completely enjoy. The broth had a good onion taste and a nice added spiciness to it. The provided vegetables hydrated alright. 2.75 out of 5.0 stars. EAN bar code 8936061900183.

Vietnamese Home Cooking (from Amazon) With solid instruction and encouraging guidance, perfectly crispy imperial rolls, tender steamed dumplings, delicately flavored whole fish, and meaty lemongrass beef stew are all deliciously close at hand. Abundant photography detailing techniques and equipment, and vibrant shots taken on location in Vietnam, make for equal parts elucidation and inspiration. And with master recipes for stocks and sauces, a photographic guide to ingredients, and tips on choosing a wok and seasoning a clay pot, this definitive reference will finally secure Vietnamese food in the home cook’s repertoire.