One thing that really surprised me during our trip was seeing that a lot of the fast food chains that are popular here in the United States are also popular in Malaysia. Burgers, fried chicken and even pizza were well represented by popular chain restaurants over there (I will say that there was no sign of the ubiquitous taco chain here). They all had different ways of serving things to fit with the local taste; like spicy fried chicken with rice or seafood pizza. This got me thinking that maybe a fusion of pizza and MyKuali White Curry might work in some way. I thought about it for a while and decided today was the day. We got the ingredients together and The Ramen Rater’s MyKuali White Curry Pizza was born! Check it out! 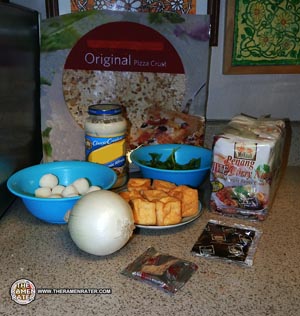 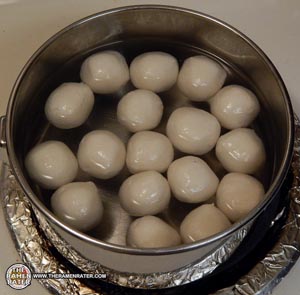 The fish balls I had were frozen, and so I boiled them in some water and added the contents of the MyKuali Penang White Curry Noodle seasoning sachet. 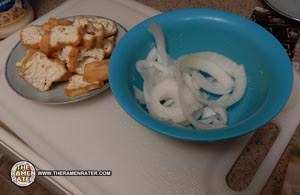 On the left are the tau pok – I used kitchen scissors and cut them into thin slices. On the right is some white onion I sliced as well. 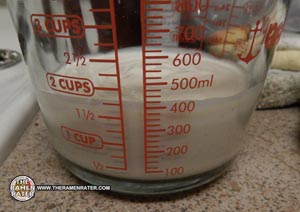 I wasn’t sure how much alfredo sauce would be needed for the pizza, so I thought a logical amount would be the same as the water usually called for on the package of noodles. I put it ion a saucepan and heated it very gently and added the contents of the curry paste sachet and stirred regularly. 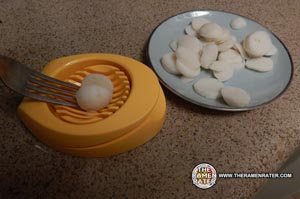 I wanted to slice the fishballs nicely but wasn’t sure how, then it came to me: a hard boiled egg slicer! I found also with this one that after closing it, a fork would pull it off nicely. 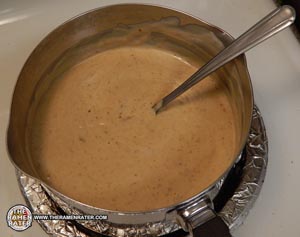 Here’s the alfredo curry sauce when it was ready to go. 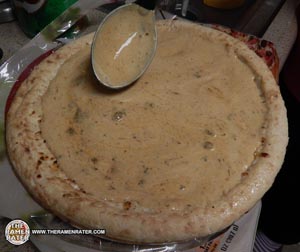 Alright – let’s put this pizza together! I started by adding a little even coat of olive oil to the crust, and then added a layer of the sauce. 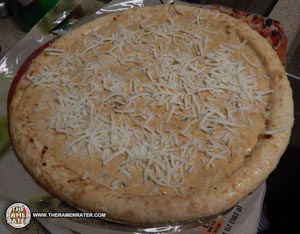 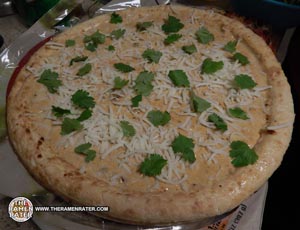 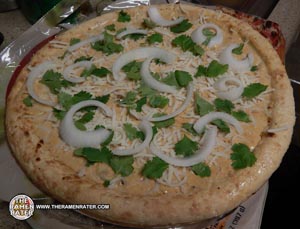 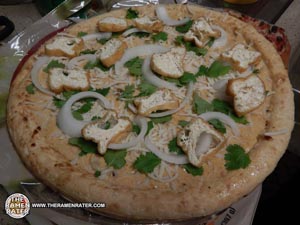 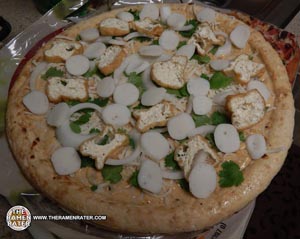 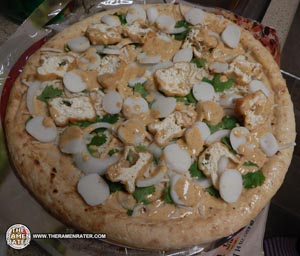 Some more of the curry sauce… 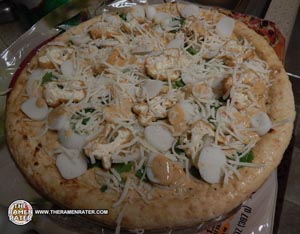 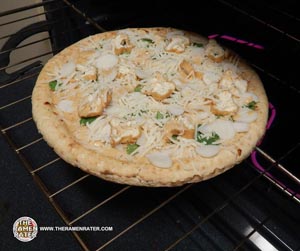 Into the over, preheated to 450 degrees. 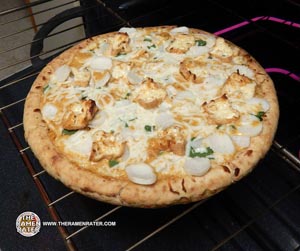 Eight minutes later, we have a pizza! 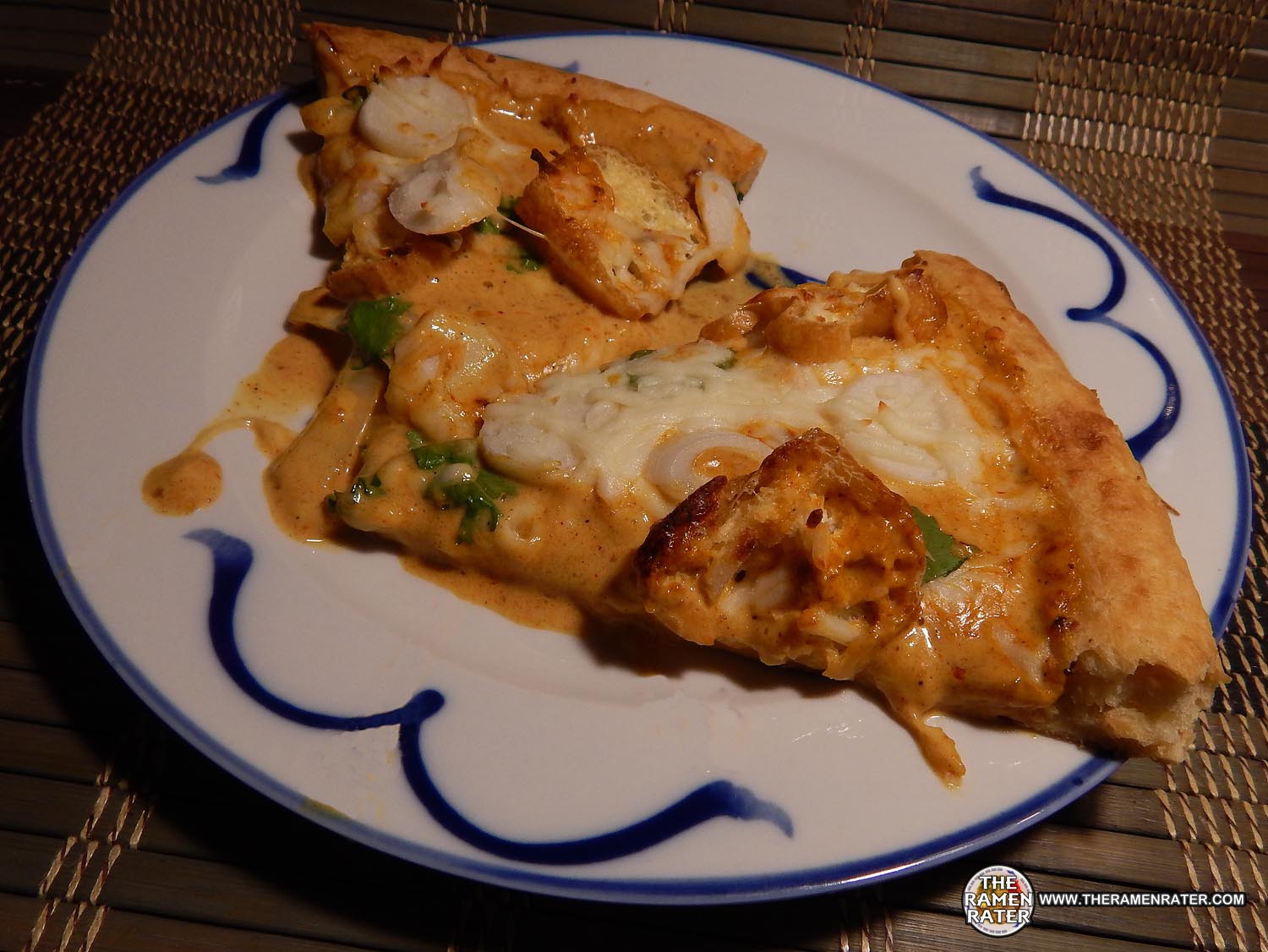 Here’s a side view of the finished product(click image to enlarge). 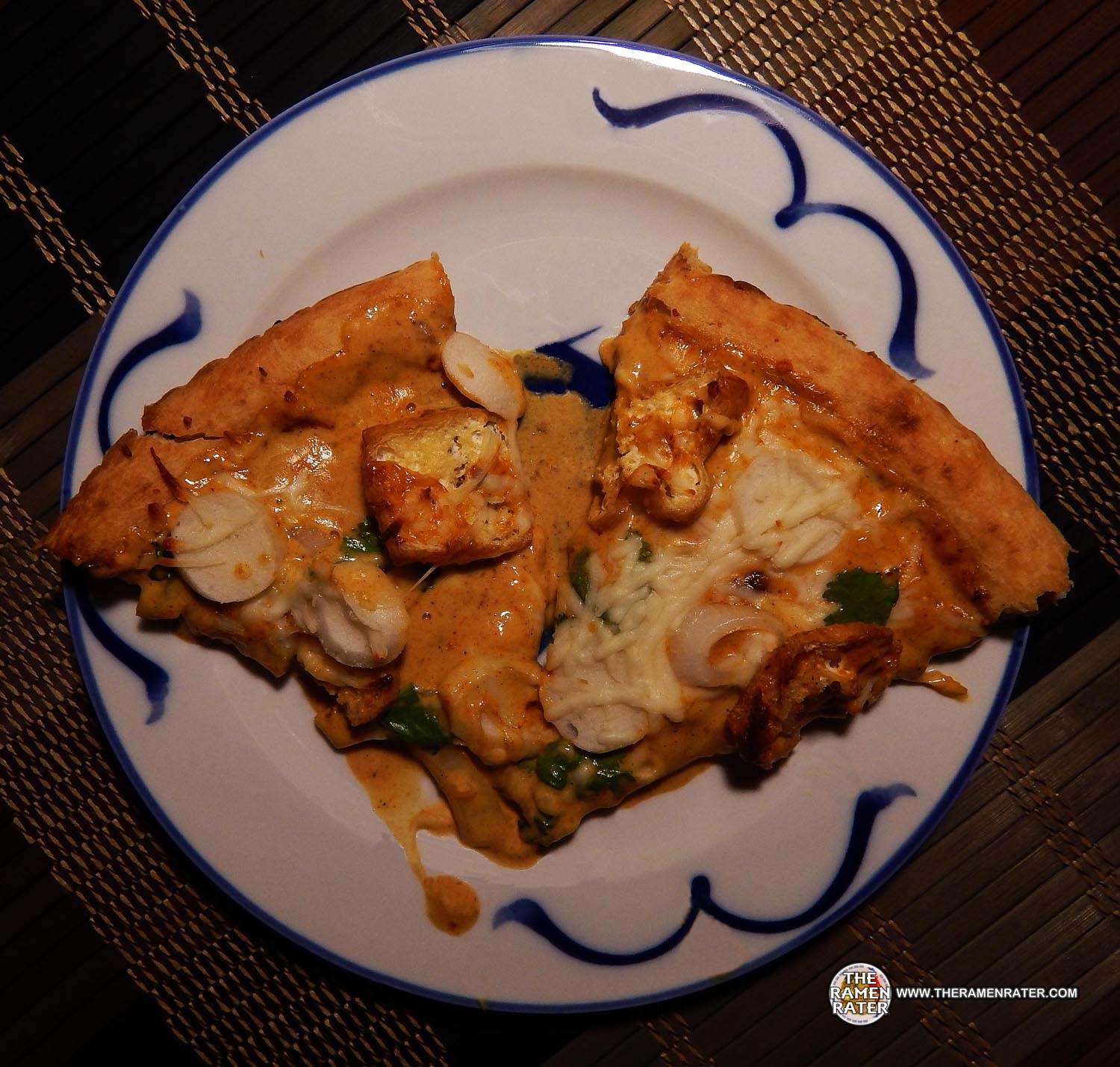 Finally, a picture from above (click image to enlarge). How is it? Well, the curry and alfredo paired wonderfully well. It’s a very sloppy pizza of course the way we did it, but could be a little less so without the second addition of the curry sauce. To be honest though, I really liked the drippy nature of it. The fishball lent a nice little fish hit, and the sliced white onion had an agreeable crunchiness. If you really like pizza and you really like MyKuali Penang White Curry, I think you’d probably enjoy this quite a bit! For a different crust, I suppose you could use naan bread or parantha – that could be really good too. Special thanks to my wife Kit for her help in preparing.