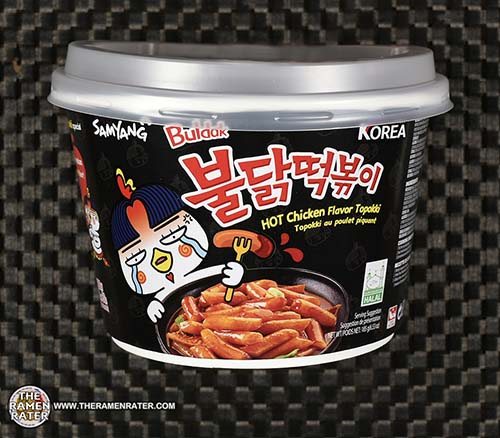 Okay, alright. It’s another Buldak spicy thing and this time its not topokki and ramen, it’s just topokki. What’s exciting about this is that this is the export version. I’m usually not happy about getting export versions; I want the local versions; te ones that people in their respective countries find at the store. But what’s cool is that this is now available in the United States – and I’ve seen it here recently. This is original Buldak Bokkeummyun flavor – there’s also a Carbo version as well. For those of you who are asking ‘what’s a topokki?!’ here’s a little info from Wikipedia –

Tteok-bokki (떡볶이) or stir-fried rice cakes is a popular Korean food made from small-sized garae-tteok (long, white, cylinder-shaped rice cakes) called tteokmyeon (떡면; “rice cake noodles”) or commonly tteok-bokki-tteok(떡볶이 떡; “tteok-bokki rice cakes”).[1][2] Fish cakes, boiled eggs, and scallions are some of the most commonly added ingredients. It can be seasoned with either spicy gochujang (chili paste) or non-spicy ganjang (soy sauce)-based sauce; the former being the most typical form,[3], while the latter is less common and sometimes called gungjung-tteok-bokki (royal court tteok-bokki). Today, variations also include curry-tteok-bokki, cream sauce-tteok-bokki, jajang-tteok-bokki, seafood-tteok-bokki, galbi-tteok-bokki and so on. Tteok-bokki is commonly purchased and eaten at bunsikjip (snack bars) as well as pojangmacha (street stalls). There are also dedicated restaurants for tteok-bokki, where it is referred to as jeugseog tteok-bokki (impromptu tteok-bokki).

Ingredients such as seafood, short ribs, instant noodles, chewy noodles are also added to the dish.

Alright – let’s cook it up and I’ll do my best to lay waste to it.

Detail of the side panels (click to enlarge). Looks to be meat free but check for yourself. To prepare, add topokki and sauce to the bowl. Add water to fill line (note it’s much lower than on most noole cups. Microwave at 1000W for 2 minutes and 30 seconds with the lid on.  Finally, stir and enjoy! 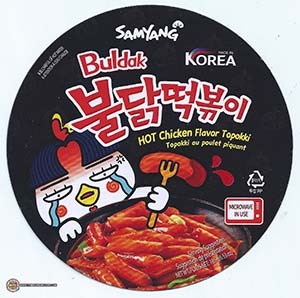 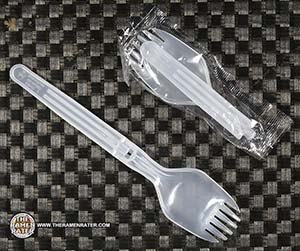 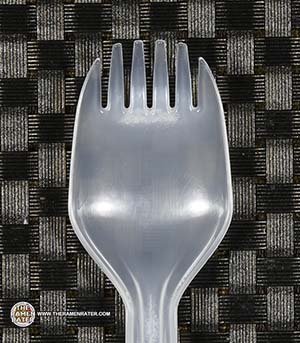 The sextet of tines here are daunting! Check this out for a full list of forks – it’s really quite fascinating! 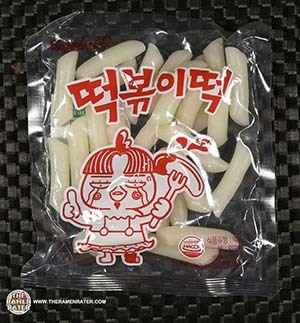 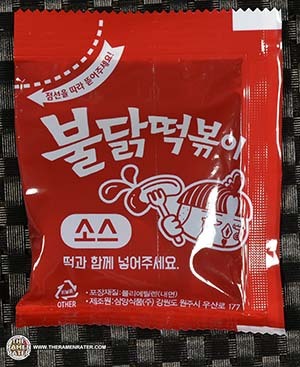 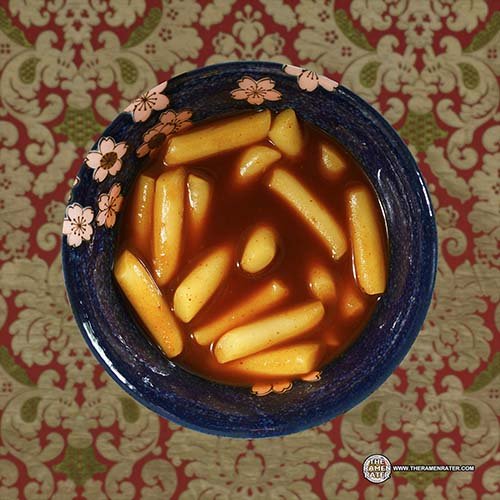 Finished (click to enlarge). Chewy topokki is of good quality and plentiful. The sauce is sweet and very spicy. It’s tasty as well as hot – the heat level reminds me of the topokki buldak ramen they produce. 4.0 out of 5.0 stars.  EAN bar code 8801073910270.