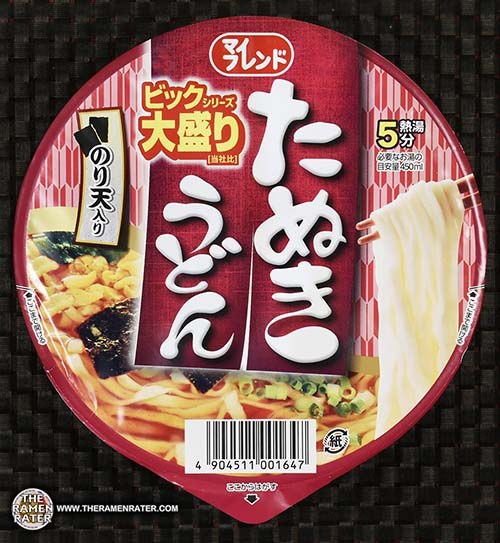 Today, we have one that was part of Japan Crate’s Umai Crate. So Japan Crate is a subscription service which has all sorts of different options for you. pretty neat stuff from Japan! There’s a coupon code for you too – just use THERAMENRATER to get a special discount at check out.

So here’s what the folks at Japan Crate had to say about this variety -“Tanuki Udon is an udon served in a hot dashi broth and topped with tempura pieces called Tenkasu. This particular one is from My Friend company’s Big series that is popular for their large size.”

The Japanese raccoon dog (Nyctereutes procyonoides viverrinus[1]), also known as tanuki (狸 or たぬき, [taꜜnɯkʲi̥]) in Japanese, is a subspecies of the Asian raccoon dog.

Researchers[who?] have suggested that they be considered a separate species, N. viverrinus, or that raccoon dogs of Japan could be further divisible into separate subspecies as N. p. procyonoides (hondo-tanuki) and N. p. albus(ezo-tanuki), but both views are controversial.

As the tanuki, the animal has been significant in Japanese folklore since ancient times. The legendary tanuki is reputed to be mischievous and jolly, a master of disguise and shapeshifting, but somewhat gullible and absent-minded. It is also a common theme in Japanese art, especially statuary.

“Tanuki” is often mistakenly translated into English as “badger” or “raccoon” (as used in the US version of the movie Pom Poko and outlined in Tom Robbins‘ book Villa Incognito), two unrelated types of animals with superficially similar appearances. Traditionally, different areas of Japan had different names for raccoon dogs as animals, which would be used to denote different animals in other parts of the country, including badgers and wild cats; however, the official word in the standard Tokyo dialect is now “tanuki”, a term that also carries the folkloric significance.

The tanuki has a long history in Japanese legend and folklore. Bake-danuki (化け狸) are a kind of tanuki yōkai (ghost) found in the classics and in the folklore and legends of various places in Japan.

Although the tanuki is a real, extant animal, the bake-danuki that appears in literature has always been depicted as a strange, even supernatural animal. The earliest appearance of the bake-danuki in literature, in the chapter about Empress Suiko in the Nihon Shoki written during the Nara period, there are such passages as “in two months of spring, there are tanuki in the country of Mutsu (春二月陸奥有狢),[8] they turn into humans and sing songs (化人以歌).[9] “.[10][11] Bake-danuki subsequently appear in such classics as the Nihon Ryōiki[10][12][13] and the Uji Shūi Monogatari.[10] In some regions of Japan, bake-danuki are reputed to have abilities similar to those attributed to kitsune (foxes): they can shapeshift into other things,[10][13] shapeshift people,[10][13] and possess human beings.[10][14]

Many legends of tanuki exist in the Sado Islands of Niigata Prefecture and in Shikoku, and among them, like the Danzaburou-danuki of Sado, the Kinchō-tanuki and Rokuemon-tanuki of Awa Province (Tokushima Prefecture), and the Yashima no Hage-tanuki of Kagawa Prefecture, the tanuki that possessed special abilities were given names, and even became the subject of rituals. Apart from these places, tanuki are treated with special regard in a few cases.[15]

The character 狸, pronounced lí in modern Mandarin, was originally a collective name for medium-sized mammals resembling cats in China, with the leopard cat as its nucleus. When this character was brought to Japan, it could not be suitably applied to any animals. Japanese intellectuals used the character to signify tanuki, stray cats, wild boars, Eurasian badgers, weasels, and Japanese giant flying squirrels.[12][13]

The tanuki of Japan from time immemorial were deified as governing all things in nature, but after the arrival of Buddhism, animals other than envoys of the gods (foxes, snakes, etc.) lost their divinity. Since all that remained was the image of possessing special powers, they were seen as evil or as yōkai, with tanuki being a representative type. Some also take the viewpoint that the image of the tanuki has overlapped with that of the mysterious and fearful 狸 of China (leopard cat).[13] However, since the tanuki of Japan do not have the fearsome image that the leopard cats of China do, unlike in China, their image took the form of a more humorous kind of monster,[13] and even in folktales like “Kachi-kachi Yama“, and “Bunbuku Chagama“, they often played the part of foolish animals.[14][16]

Compared with kitsune, which are the epitome of shape-changing animals, one saying is given that “the fox has seven disguises, the tanuki has eight (狐七化け、狸八化け)”. The tanuki is thus superior to the fox in its disguises, but unlike the fox, which changes its form for the sake of tempting people, tanuki do so to fool people and make them seem stupid. Also, a theory is told that they simply like to change their form.[13]

Tanuki statues at a temple in Kamakura, Kanagawa, Japan

The comical image of the tanuki having a large scrotum is thought to have developed during the Kamakura era, where goldsmiths would use the pelts of tanuki for the process of hammering gold nuggets into leaf. Due to the actual wild tanuki having disproportionately large testicles, a feature that has inspired humorous exaggeration in artistic depictions, and how gold nuggets share a homophone with testicles in the Japanese language, such associations would come to memetically link them together into its folklore image tradition of being a creature of wealth and whimsy. Tanuki may be shown with their testicles flung over their backs like travelers’ packs, or using them as drums. As tanuki are also typically depicted as having large bellies, they may be depicted as drumming on their bellies instead of their testicles — particularly in contemporary art

A lot I know, but I think the Tanuki is a fascinating bit of Japanese culture. Let’s check this variety out!

Detail of the side panels (click to enlarge). Probably contains fish – check for yourself. To prepare, add sachet contents and boiling water to fill line. Cover for 5 minutes. Finally, stir and enjoy! 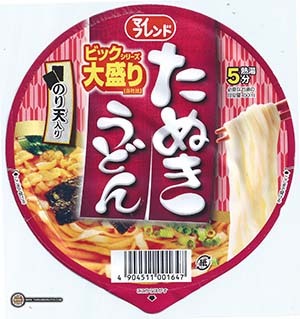 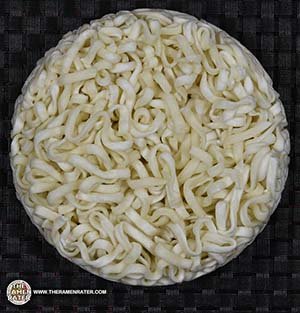 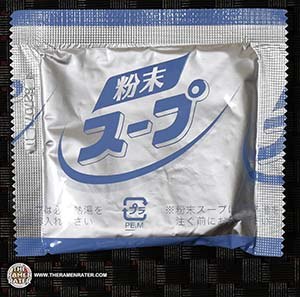 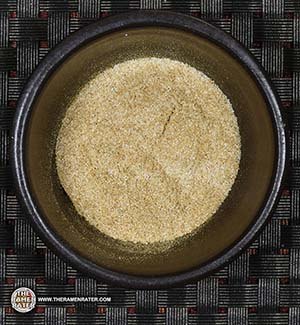 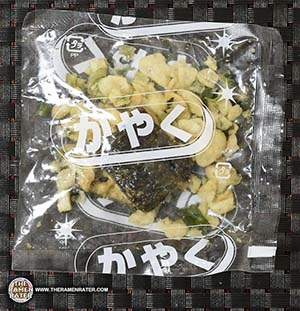 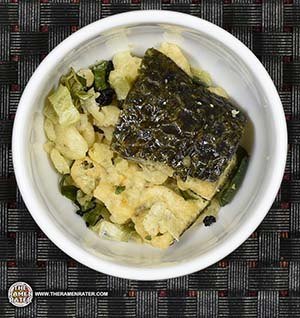 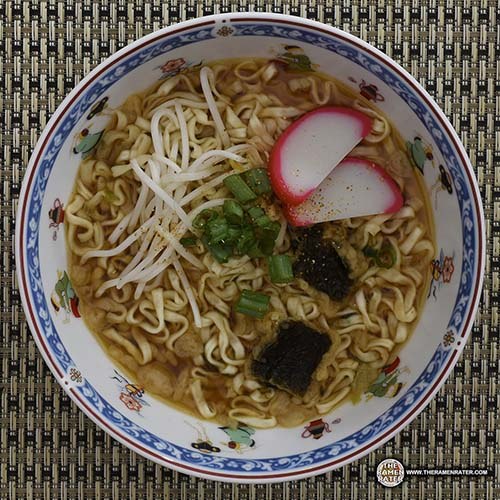 Finished (click to enlarge). Added kamaboko, Salad Cosmo organic mung bean sprouts, spring onion and shichimi togarashi. The udon is wide and thick. Has a soft chew but a good one. The broth is pretty good – with a kind of sweet fish taste. The bowl is full of tempura – I like the tempura/seaweed combo pieces – they were quite good. 3.75 out of 5.0 stars.  JAN bar code 4904511001647.

All about the raccoon dog