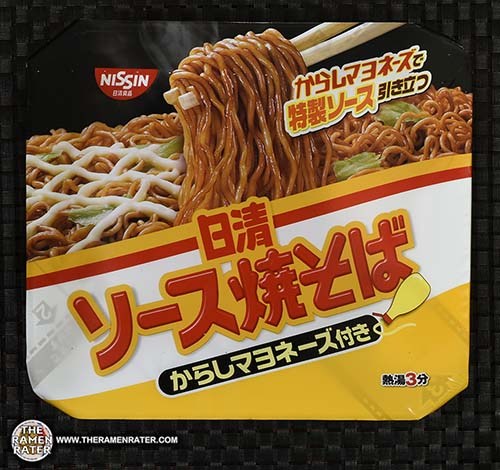 Alright – bring on the confusion, the shock and the WTF’s. Yes, mayonnaise is very popular as a topping in Japan. Why? Well, it’s freaking awesome – it’s tasty and works very well. Yakisoba without it is just not as good.

Speaking of mayonnaise, I once had the chance to partake in a contest with a friend many years ago. Two jars of mayonnaise, I believe 12 ounce, were purchased. The challenge was to see who could eat more in 10 minutes. I was on no problem; I had the title of Mayonnaise King for a long time. But he wanted to challenge me so I figured why the hell not. This was at a party and people were actually betting on who would win. The timer started and the eating began.

Mayonnaise is thick and oily stuff. The first big bite was no problem, however, the second was. Once the first goes down, the next wants to stick to it so it is a very slow process. I did win, but by a slim margin. I think where I won though was as this was a party we were having some beers and I chose a Coors – very bubbly. This broke down the funk I had in my mouth from the mayo and I was back in action quickly. My opponent, however, sat on a couch, whining and moaning for much of the evening.

Here’s a little from Wikipedia about Japanese mayonnaise –

Japanese mayonnaise is typically made with apple cider vinegar or rice vinegar and a small amount of MSG, which gives it a different flavor from mayonnaise made from distilled vinegar.[39][page needed][40] It is most often sold in soft plastic squeeze bottles. Its texture is thicker than most Western commercial mayonnaise in part because only egg yolks and not the entire egg is used when making it.[41]

Apart from salads, it is popular with dishes such as okonomiyaki, takoyaki and yakisoba and may also accompany katsu and karaage.[42]

Kewpie (Q.P.) is the most popular brand of Japanese mayonnaise,[43] advertised with a Kewpie doll logo. The vinegar is a proprietary blend containing apple and malt vinegars.[44] The Kewpie company was started in 1925 by Tochiro Nakashima, his goal was to create a condiment that made eating vegetables more enjoyable.[45]

So yeah – mayonnaise is great in yakisoba. I will say right here that I absolutely despise and wretch at the thought of Miracle Whip, so don’t even consider using it on yakisona. Let’s check this one out.

The distribution sticker (click to enlarge). I wish they were better with the names of these products on these labels… 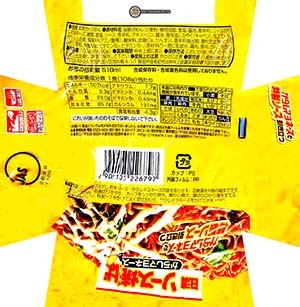 Here’s detail of the outer wraps (click to enlarge). Unsure whether or not it contains meat. To prepare, open tab 1 to line 2. Take out sachets. Add in boiling water to line and close for 3~4 minutes. Open tab 3 and use to drain. Remove lid. add in powder sachet and combine. Finally, add mayonnaise sachet contents and enjoy! 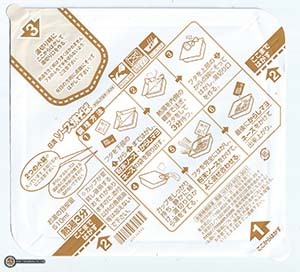 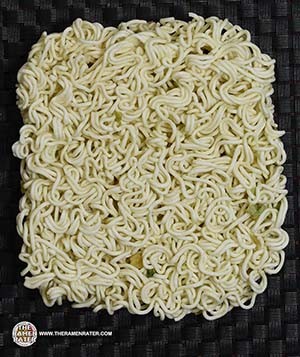 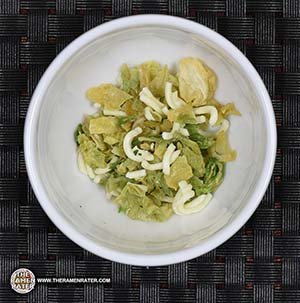 Loose garnish from inside the tray. 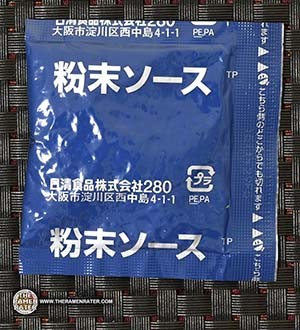 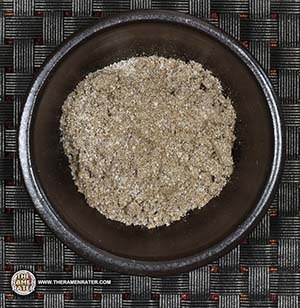 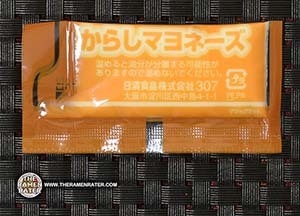 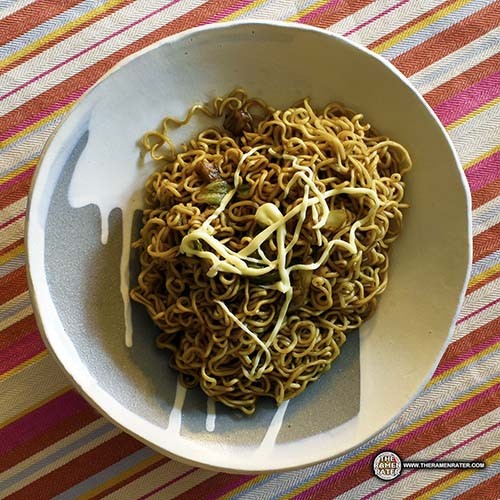 Finished (click to enlarge). The noodles are on the dry side although they pull in the yakisoba powder nicely. The powder coats everything and has a very authentic taste to it. The included garnish is great – I especially love the crunchy cabbage. Finally, the mayonnaise has a little kick to it and just brings it all home. 5.0 out of 5.0 stars. JAN bar code 4902105226797.