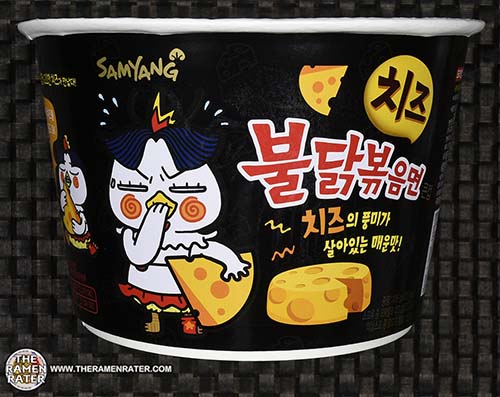 Wait a second – this looks familiar. So there are two versions of the Samyang Foods Buldak Bokkummyun cheese flavor bowls. Indeed there are two versions of the packs as well. Here’s the orange version I reviewed – #2291. What’s the difference? I’m going to guess that they came out with the black one first and people mistook it for the regular version and were annoyed. Kind of makes sense since the black one definitely looks like the standard Buldak Bokkummyun bowl. Well, except for the chicken with the cheese. Here’s what Wikipedia has to say about the original variety:

Buldak Bokkeum Myun (Korean: 불닭볶음면) is a brand of ramyeon produced by Samyang Food in South Korea since 2012.[1] In 2015, the brand attained monthly sales of 6 to 7 billion won.[2] Buldak Bokkeum Myun is known for being one of the spiciest ramyeon in Korea.[3][4]

I recently created The Definitive Guide To Buldak Bokkeummyun and reviewed the whole line of the Buldak Bokkeummyun products and interviewed Samyang Foods too. This black background version indeed was changed up for a more ‘cheese colored’ version. Anyways, let’s crack this one open.

Detail of the side panels (click to enlarge). Looks to be meat free but check for yourself. To prepare, add boiling water to fill line and let sit covered for 4 minutes. Poke holes in the lid (through the little triangles). Use them to drain off excess water – leave just a little in there. Add in sachet contents. Finally, stir and enjoy! 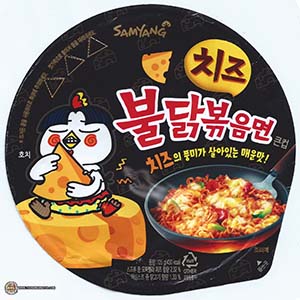 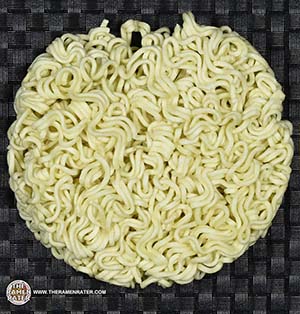 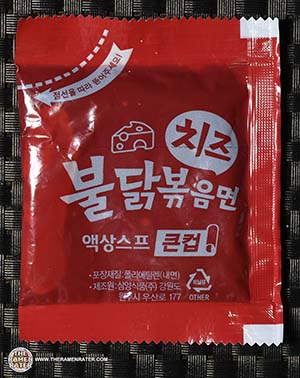 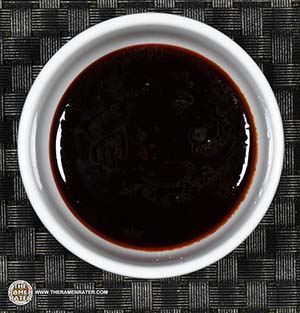 The fiery stuff of legend. 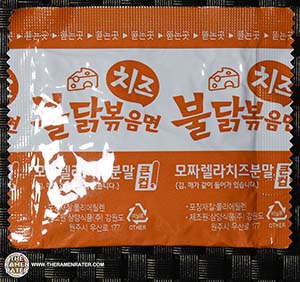 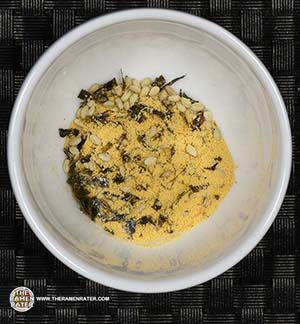 This looks slightly different from review #2191. I don’t see the flecks of seaweed and sesame seeds in that one. 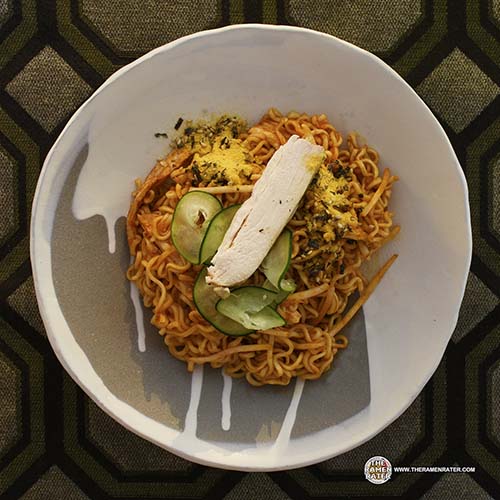 Finished (click to enlarge). Added Salad Cosmo mung bean sprouts, cucumber and baked chicken. So the noodles came out great. Indeed, they have a thick gauge and decent backbone. The flavor is spicy hot in the extreme. This is one of the hottest instant noodles out there, however about half as spicy as the original. It is not a non-spicy though so don’t think you’re getting off the hook with just a cheese taste – it’s still extremely spicy. Finally, the cheese powder just doesn’t cut into the heat very much and is kind of undetectable for this reviewer. I think a liquid cheese sachet to drizzle on top would bump it up a notch. 4.0 out of 5.0 stars. EAN bar code 8801073210967.

My definitive guide to the whole series of these ultra-spicy noodles.