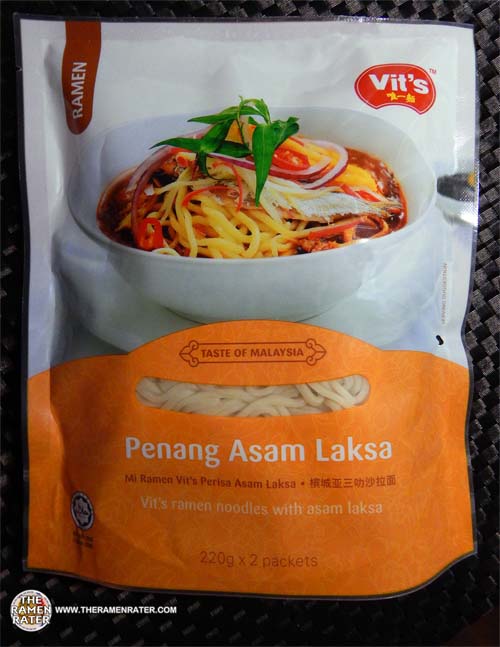 Here’s something fancy – asam laksa ramen! Vit’s has a ramen line which uses these pouches of fresh ramen noodles – haven’t seen this kind of thing before with Malaysian flavors. Here’s a little about what asam laksa is from wikipedia:

Asam laksa is a sour, fish and tamarind-based soup. Penang Asam Laksa listed at number 26th on World’s 50 most delicious foods complied by CNN Go in 2011.[6] Asam is the Malay word for any ingredients that makes a dish tastes sour (e.g. tamarind, gelugur or kokum). Laksa typically uses asam keping, known as kokum in the English speaking world, which is a type of dried slices of sour mangosteens. The modern Malay spelling is asam, though the spelling assam is still frequently used.

Penang laksa (Malay: Laksa Pulau Pinang), also known as asam laksa from the Malay for tamarind, comes from the Malaysian island of Penang. It is made with mackerel (ikan kembung) soup and its main distinguishing feature is the asam or tamarind which gives the soup a sour taste. The fish is poached and then flaked. Other ingredients that give Penang laksa its distinctive flavour include lemongrass, galangal (lengkuas) and chilli. Typical garnishes include mint, pineapple slices, thinly sliced onion, hε-ko, a thick sweet prawn paste and use of torch ginger flower. This, and not ‘curry mee’ is the usual ‘laksa’ one gets in Penang. Penang Laksa is listed at number 7 on the World’s 50 best foodscompiled by CNN Go in July 2011

Sound good? Let’s check it out! 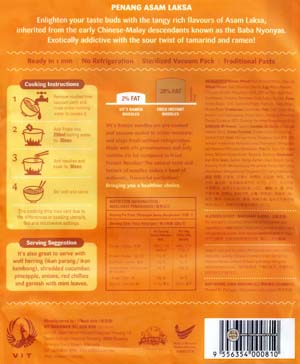 Here’s the back of the package (click to enlarge). Contains prawn and fish. To prepare, take noodles out of one of the two pouches and run under water to loosen. Add paste to 250ml boiling water for 30 seconds. Add noodles and cook for 30 seconds. Stir and enjoy! 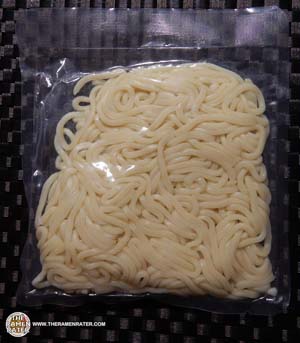 The the package contains two servings, so two of these fresh ramen pouches. 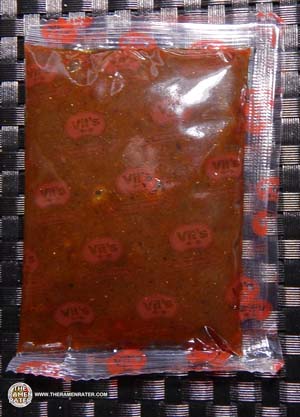 There are also two of these large paste sachets. 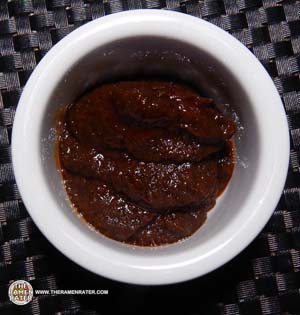 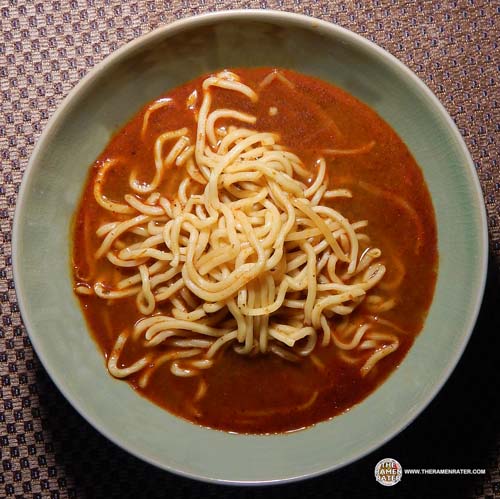 Finished (click to enlarge). Added Salad Cosmo mung bean sprouts. The noodles in this one were probably the best fresh pouch/shelf stable ramen I’ve had yet. Chewy and thick. The broth was top notch as well with a sweet and spicy flavor and a good amount of oiliness. The thickness was there – rich with bits of fish floating around. Awesome asam laksa! 5.0 out of 5.0 stars. EAN bar code 9556354000810.

I must say that travelling to Malaysia was one of the highlights in my life. Here’s a Lone Planet guide to KL, Melaka and PG!

A day in Penang with curry mee and asam laksa!