Update – I also have a scanned copy of this article – you can find it here! 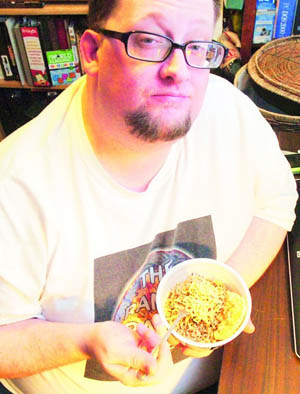 Which ramen is top?

His quest began when his favorite ramen variety was discontinued. As a child in Anacortes, Hans Lienesch enjoyed eating Roasted Ramen, a kind of instant noodles made by Nissin, famous for its Top Ramen and Cup Noodles.

Then Roasted Ramen vanished from the shelves of the now-closed Prairie Market.

With the help of his family, Lienesch trekked to Uwajimaya, the popular Asian supermarket in Seattle’s International District, to find the Japanese counterpart to his favorite noodles. There was no place in Skagit County where he could find them.

“It was a journey,” said Lienesch, now 36 and an independent computer restorer.

After several return trips to Uwajimaya, “I kept finding weird noodles I never heard of.”

A hobby was born. In 2002, Lienesch decided to document it.

The result is the Ramen Rater, an online database of every ramen noodle Lienesch has tried. It includes reviews, photos, recipes and forums where fans exchange opinions and ask questions about ramen.

“I’ve been just trying everything I can from all over the world,” Lienesch said. “It’s kind of a quirky kind of hobby. It’s kind of weird. It’s cheap.”

The site has attracted worldwide attention, garnering praise and criticism from international readers and earning mention in Dutch and Brazilian magazines.

A blog is born

After starting the Ramen Rater, Lienesch reviewed 57 different kinds of ramen before going on hiatus and adhering to the Atkins diet, a low-carbohydrate regimen that forced him to give up noodles for a few years.

“If you’re doing lowcarb and they make bread, it’s going to be carbs either way you slice it,” Lienesch said. “I’m a victim of deliciousness.”

During his ramen hiatus, Lienesch reviewed hot sauce, another one of his culinary passions. He rated more than 280 before tiring of it. He prefers making his own, anyway.

Lienesch resumed his work as the Ramen Rater in June 2010 and has reviewed a new packaged noodle (or two) every day.

Lienesch moved away from Anacortes as an adult and moved back for a time, but has lived in Edmonds since 2009 with his wife, Christine, whom he married in July.

He has now critiqued nearly 600 kinds of ramen.

Because he is legally blind, Lienesch walks to find ramen — his Highway 99 apartment is surrounded by Asian markets — or he is driven to area markets by his supportive wife.

“I thought it was pretty neat,” Christine Lienesch said of her husband’s hobby. “It’s nothing I ever ate before I met him.”

She doesn’t usually partake in the ramen-noshing with him.

“Sometimes I’m like, ‘That smells so gross I don’t wanna try it,’” she said.

Hans Lienesch hasn’t had to buy ramen for review in at least a month. Donors from around the world send him new varieties to sample. He recently received a shipment of 25 packs of noodles from England.

When Christine Lienesch’s parents or sister travel and stumble upon noodles, they call to find out what her husband hasn’t tried yet.

“He has us all trained very well, too,” she said.

Ramen Rater headquarters in Hans Lienesch’s apartment is an amalgam of all his interests. His walls are covered with San Francisco Giants memorabilia and boldly colored geometric artwork he creates with crayons.

Near the computer is the ramen corner, including a laundry hamper full of noodle packages.

“It’s always good to have more than you need,” Lienesch said.

On the wall are a ramen themed pillow and pair of socks.

Zwang praised Lienesch by email from a hospital while undergoing treatment for Crohn’s disease, which affects digestion. He could only consume liquids and visited the Ramen Rater site every day to “eat vicariously,” he said.

“Ramen noodles may seem to be a trivial topic to some people, but to me, when I am currently unable to eat anything at all, it becomes something more,” Zwang wrote. “It becomes a symbol, a goal perhaps, that I can look forward to someday getting well and being able to enjoy the simple things in life that I like best.”

Lienesch sent Zwang a sampler of more exotic noodles to try when his health improved. Zwang keeps the noodle packages on his hospital windowsill as an incentive to get well.

“I look forward to the day when I can return to eating again, and Hans gives me motivation to get better,” Zwang wrote.

Another Florida Ramen Rater fan hopes to enhance the site with an iPhone application.

Greg Brown of Orlando grew up eating ramen, having lived in Japan until he was 8 years old while his father was stationed with the Navy.

“When you’re going to college, people say, ‘We’re so poor, we gotta eat ramen,’” Brown said. “Oh, you guys don’t even know. You should be happy to eat ramen.”

Brown stumbled upon Lienesch’s site about a year ago while researching different kinds of ramen. He generally agrees with Lienesch’s reviews — though Brown likes his noodles less spicy and less soupy than Lienesch does — so the Ramen Rater was a helpful guide as he shopped.

But he came across two problems while navigating the site.

First, it look a long time to look up a certain kind of noodle in his iPhone while browsing an Asian market; he said he drew stares. Second, Brown often comes across brands that Lienesch hasn’t yet tried.

He approached Lienesch with a solution.

“You need an iPhone app,” Brown told him, “and I can write it for you.”

One feature of the app, which could be finished early next year, would allow owners to scan the bar code of a package of noodles to retrieve Lienesch’s review. Another would allow users to send a picture of the noodles to Lienesch if he hasn’t reviewed them yet.

Ramen fans would also be able to “check in” at a specific store and find user contributed reviews of that store’s selection.

Lienesch couldn’t be more excited about the app.

Lienesch is methodical in his critiques. One day last month, he reviewed a bowl of Menraku Japanese Tempura “Soba,” the 576th ramen review on his site. He picked it up at H Mart in Lynnwood. At about $2, the noodle was considered “higher-end” by Lienesch.

He took photos of the packaging, directions and spice packets. He saved the bowl’s lid to add to his collection of noodle packages, which now fills two binders.

“All right, tempura,” he cheered as he removed what looked like a plastic wrapped orange rice cake from the bowl.

Lienesch reviewed the ramen for the quality and taste of its broth and noodles. He’ll also review the vegetables, if they’re included. He doesn’t like noodles that are “spongy.” And if the noodles don’t taste like the flavor advertised, then “there’s a problem.”

He likes noodles with lots of vegetables that hydrate well, and “the more (flavor) packets, the better.”

On this day, Lienesch poured boiling water over the noodles and covered the bowl with a yearbook while the ramen steeped. After a few minutes, he put the tempura cracker on top and took a bite. Lienesch forgoes chopsticks in favor of a fork. He silently typed his reaction into his blog after his first taste. He then checked the label on the bowl. “Oh, yep.” What was he checking for? “If they’re buckwheat,” he said. The “crumbly” texture he had just experienced is typical of buckwheat noodles. He sipped the broth and took a bite of the tempura cracker. “Mmm.” The verdict: He gave the dish 3.75 out of five stars. “Without the tempura it would be getting a 3.25,” he said.

It was “one slight step above Top Ramen,” he added.

“A little salty, kind of miso-like,” he said, reflecting on the day’s noodles. “The tempura’s awesome — crunchy, tastes kind of salty.”

Lienesch’s favorite noodles tend to be Indonesian, namely from the Indomie brand.

Then there are the real duds. Among the most memorable bombs was a kind of Chinese sweet potato noodle that, only after trying it, he found out was “fatty pork intestine” flavor.

“It made me want to retch,” he said. “They look like nylon weed-whacker material.”

Lienesch’s reviews sometimes provoke strong reactions. He recalled the backlash when he didn’t give a popular Korean noodle a perfect score. Korean fans called him a moron, he said.

Lienesch is dismissive of those who get upset about his opinions.

For the most part, fans love the Ramen Rater, for all its quirkiness and ramen-revering wonder.

“People are seriously devoted to these things,” he said. “It’s great.”