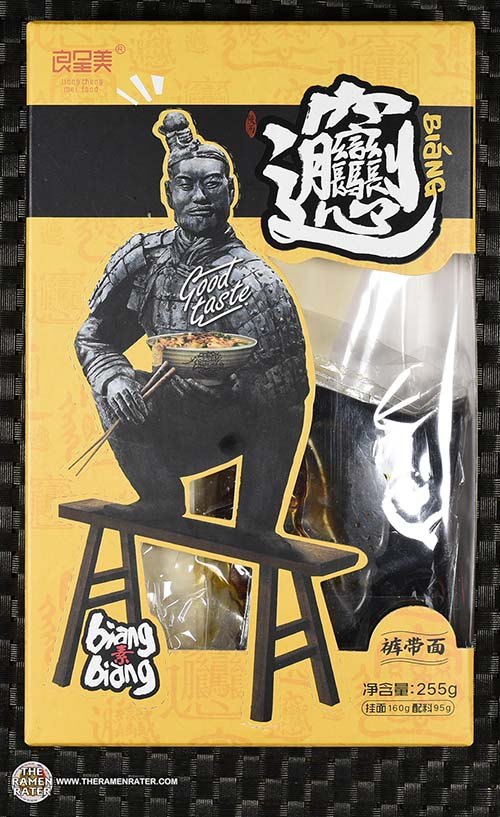 Here’s another Lianchengmei product that my wife found while we were perusing the aisles at Foodyworld up in Richmond, BC. She found one a while back – 30″ Hot Bird, a fire noodle clone. What’s Biang Biang? Here’s what Wikipedia had to say –

Biangbiang noodles, alternatively known as youpo chemian in Chinese, are a type of noodles popular in the cuisine of China‘s Shaanxi Province. The noodles, touted as one of the “eight strange wonders of Shaanxi” (陕西八大怪), are described as being like a belt, owing to their thickness and length.

The noodle is broad and hand-made. It was originally part of a poor man’s meal in the countryside, but has recently become renowned due to the unique character used in its name. Dishes with this noodle are often topped with lots of red hot peppers for the cold winter in Shaanxi.

Made up of 58 strokes in its traditional form[Note 1] (42 in simplified Chinese), the Chinese character for biáng is one of the most complex Chinese characters in contemporary usage,[2] although the character is not found in modern dictionaries or even in the Kangxi dictionary.

The character is composed of 言 (speak; 7 strokes) in the middle flanked by 幺 (tiny; 2×3 strokes) on both sides. Below it, 馬 (horse; 10 strokes) is similarly flanked by 長 (grow; 2×8 strokes). This central block itself is surrounded by 月 (moon; 4 strokes) to the left, 心 (heart; 4 strokes) below, and刂 (knife; 2 strokes) to the right. These in turn are surrounded by a second layer of characters, namely 穴 (cave; 5 strokes) on the top and 辶 (walk; 4 strokes[Note 1]) curving around the left and bottom.

Let’s give this one a try. I should mention – the man on the front has perforation around him, so you can pop him out for whatever use you so desire. By the way big thanks to Kyle K. for help in translation! 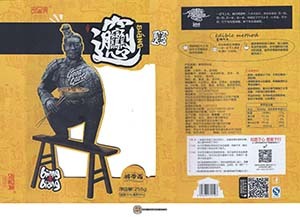 Detail of the side panels (click to enlarge). Looks to be meat free but check for yourself. To prepare, cook noodles for 5~10 minutes. Drain. Add in sachet contents. Finally, stir and enjoy! 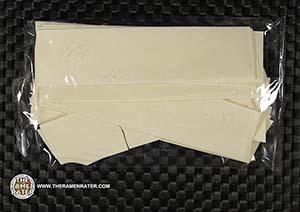 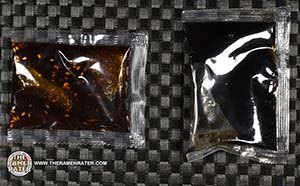 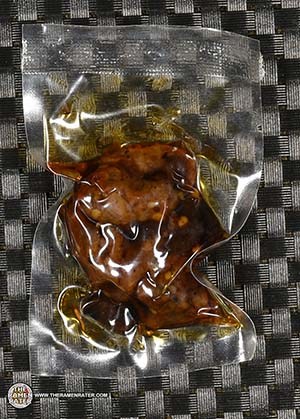 A sachet with chunky stuff. 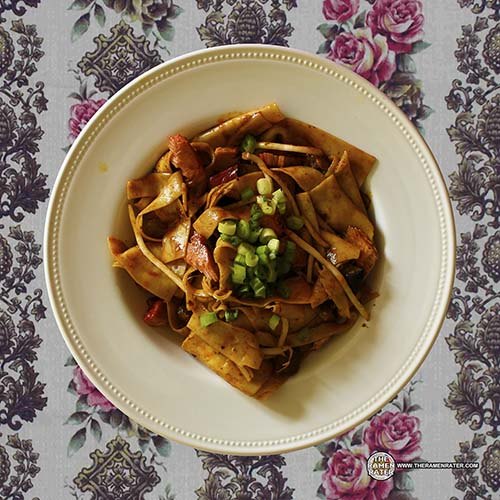 Finished (click to enlarge). Added barbecued pork, spring onion, and Salad Cosmo mung bean sprouts. Wow. Okay so the noodles are very broad and chewy – very enjoyable. The flavor that coats them is just as savory as can be, with a very nice bit of spiciness which isn’t overwhelming; marrying flavor and heat expertly. Included chunks of TVP that is so believable it’s scary; a pure delight. 5.0 out of 5.0 stars.  EAN bar code 6928988700528.