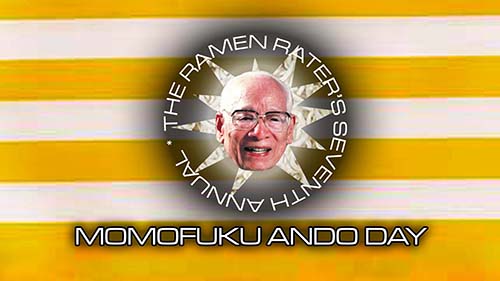 Seven years ago I first heard about Momofuku Ando Day. I was curious about it and very happy it existed – so much so that I decided that since I devote so much time to instant noodles and reviewing them, I ought to pay homage to their creator.

Today has a special meaning to me. I grew up in a place where the exotic seemed very much out of reach. In the end, the instant noodle saved me from what I considered the mundane and boring. Flavors and images from far flung places around the world at a low price. Mr. Ando’s invention has allowed me to try something new every day, had the added side effect of visiting places I’d never thought I’d see, and enjoy learning about other cultures. I salute you, Mr. Ando and your invention out of necessity. The instant noodle was born out of the hope to feed people and it has done that – especially in times of crisis and disaster. A fine legacy to leave the world.

Here’s lots of info from Wikipedia including invention timeline and early life.

Ando was born Go Pek-Hok (Chinese: 吳百福; Pe̍h-ōe-jī: Gô͘ Pek-hok) in 1910 into a wealthy Taiwanese family in Kagi-chō (Japanese: 嘉義廳, modern-day Chiayi County), Japanese-era Taiwan, and raised by his grandparents within the city walls of Tainan-chō (臺南廳, Tainan) following the deaths of his parents.[1] His grandparents owned a small textiles store, which inspired him, at the age of 22, to start his own textiles company, using 190,000 yen, in Eiraku-chō (永樂町), Daitōtei, Taihoku (Taipei).

In 1933, Ando traveled to Osaka where he established a clothing company while studying economics at Ritsumeikan University.[1]

After World War II, Japan lost Taiwan as its territory and Ando as a Taiwanese had to choose between becoming a citizen of the Republic of China (Taiwan) or remaining a Japanese subject. Ando chose the former in order to keep his ancestral properties in Taiwan (since all Japanese nationals had to forfeit their properties in Taiwan). However, Ando remained in Japan.

He was convicted of tax evasion in 1948 and served two years in jail. In his biography, Ando said he had provided scholarships for students, which at the time was a form of tax evasion. After he lost his company due to a chain reaction bankruptcy, Ando founded what was to become Nissin in Ikeda, Osaka, Japan, starting off as a small family-run company producing salt.

A recreation of Ando’s Workshop at the Momofuku Andō Instant Ramen Museum.

With Japan still suffering from a shortage of food in the post-war era, the Ministry of Health tried to encourage people to eat bread made from wheat flour that was supplied by the United States. Ando wondered why bread was recommended instead of noodles, which were more familiar to the Japanese. The Ministry’s response was that noodle companies were too small and unstable to satisfy supply needs, so Ando decided to develop the production of noodles by himself. The experience convinced him that “Peace will come to the world when the people have enough to eat.”[2]

On August 25, 1958, at the age of 48, and after months of trial and error experimentation to perfect his flash-frying method, Ando marketed the first package of precooked instant noodles. The original chicken flavor is called Chikin Ramen. It was originally considered a luxury item with a price of ¥35,[3] around six times that of traditional udon and soba noodles at the time. As of 2016, Chicken Ramen is still sold in Japan and now retails for around ¥120, or approximately one third the price of the cheapest bowl of noodles in a Japanese restaurant.

According to The Financial Times, Ando’s invention of Cup Noodles in 1971, at the age of 61, helped spark the popularity of instant noodles overseas. He had observed that Americans ate noodles by breaking the noodles in half, putting them into a cup, and pouring hot water over the noodles. They also ate them with a fork instead of chopsticks. Ando was inspired, and felt that a Styrofoam cup—with a narrower bottom than the top—would be the ideal vessel for holding noodles and keeping them warm. Eating the noodles would then be as easy as opening the lid, adding hot water and waiting. This simplicity, efficiency and low price of Cup Noodles went on to transform Nissin’s fortunes.[4]

In 1964, seeking a way to promote the instant noodle industry, Ando founded the Instant Food Industry Association, which set guidelines for fair competition and product quality, introducing several industry standards such as the inclusion of production dates on packaging and the “fill to” line. He was also the chairman of the International Ramen Manufacturers’ Association.

In 1966, Ando naturalized through marriage and became a Japanese citizen. “Momofuku” is the Japanese reading of his Taiwanese given name (百福; Pek-hok), while Andō (安藤) is the last name of his Japanese wife.

Ando was survived by his wife Masako, two sons and a daughter. Ando claimed that the secret of his long life was playing golf and eating Chicken ramen almost every day. He was said to have eaten instant ramen until the day he died.[7][8]

Momofuku Ando was repeatedly honored with medals by the Japanese government and the emperor, including The Order of the Rising Sun, Gold and Silver Star, Second Class, in 2002 which is the second most prestigious Japanese decoration for Japanese civilians.

Medal of Honor with Purple Ribbon (1983)

Order of the Direkgunabhorn of Thailand, Fourth Class, (2001)[9]

The Momofuku Ando Instant Ramen Museum is named after him.

In 2015, Google placed a doodle on its main web page commemorating his birthday on March 5.[10]

The name of the Momofuku restaurants in the United States alludes to Momofuku Ando.[11]