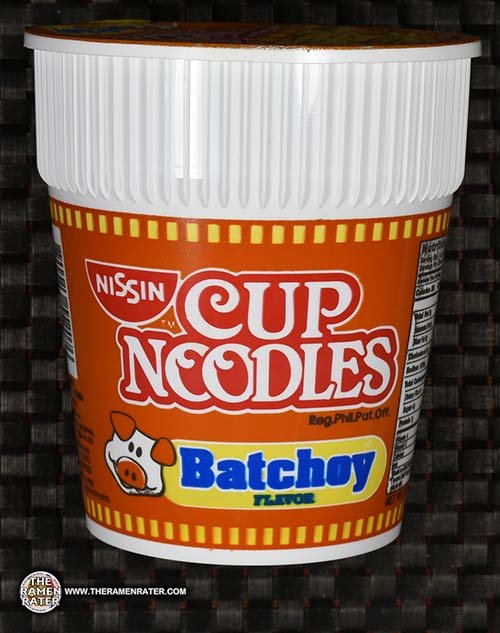 Found these while up in Canada. So my wife found a show a while back called 90 Day Fiancee where two people either meet online or when one is on vacation in a foreign country and think they want to be married. It then follows their process of getting a visa to spend 90 days in the United States and then whether they indeed are married or not. There’s a new show called Before The 90 Days before a proposal has been made. So on this show, we were watching and they follow a man who goes to the Philippines and meets a girl he’s been talking to online. Well, she picks him up at the airport and the next day brings him to her family’s home and they put on a big spread and cook up Lechon. Lechon is a roast pig, turned over a fire pit for hours and hours that’s been stuffed with chicken and vegetables like spring onion.  Long story short, her family is far from wealthy and they came together to make this big feast and he turns his nose up at it.

The girl is totally offended and floored as was I. He’s going all this way over to the Philippines, offered a traditional feast in his honor and wusses out. I mean what an ass… If you’re going to try and marry someone from a foreign country, you’re marrying the person, which includes hopefully giving a crap about their cultural background. We see this time and time again on these shows – It’s almost like these folks want to get married, but as for their culture, they can ditch that part – ‘they’ll get into the USA and then they can just get used to that.’

Pretty short sighted in my opinion. It’s like they think they’re under the impression that they are rescuing them from their cultural background. When you get married, you kind of (not kind of actually – completely) get the whole package. I think it’s disturbing to think someone wouldn’t be also enamored with the cultural background of someone.

My wife and I were married after only knowing eachother for six and a half months. We got a lot of the same kinds of concerns as people’s friends and family have for them in the shows – ‘be careful,’ ‘think about this.’ Luckily for us, it worked out great. My son Andy at the time thought Kit was from another country – California. In a way, it was kind of a different country to me – always hot, palm trees everywhere. I think that’s why we find the show interesting.

Anyways, today it’s a variety from the Philippines – batchoy. Here’s a little info from Wikipedia –

Batchoy is a noodle soup made with pork organs, crushed pork cracklings, chicken stock, beef loin and round noodles.[1] Its origins can be traced to the district of La Paz, Iloilo City in the Philippines, hence it is often referred to as La Paz Batchoy.

Ingredients include pork organs (liver, spleen, kidneys and heart) crushed pork cracklings, beef loin, shrimp broth, and round noodles or miki. The noodles are similar to spaghetti, but are generally a bit finer.

Oil is heated in a stock-pot. The pork organs, shrimp, chicken and beef are stir-fried for about a minute. Soy sauce is then added. The shrimp is then added and left to simmer for a few minutes. This broth is then added to a bowl of noodles and topped with leeks, pork cracklings (chicharon) and sometimes a raw egg is cracked on top.

Most Filipinos eat the soup using spoon and fork. The soup is generally consumed first, the liquid broth rounds out the meal. Diners are encouraged to ask for a second, third, or even a fourth helping of kaldo (Hiligaynon, “broth”).

Well, I don’t have any organ meaty (often referred to as ‘offal’), so I’m going to have to wing it with garnish. Let’s have a look at this interesting little cup!

Detail of the side panels (click to enlarge). Contains pork and chicken. To prepare, add boiling water to fill line and cover 3 minutes. finally, stir and enjoy! 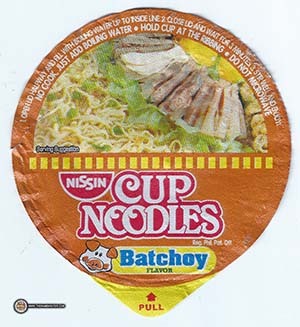 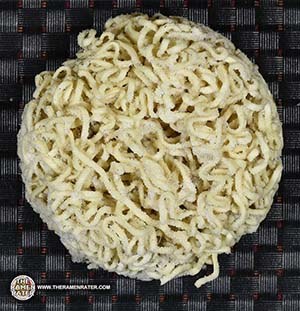 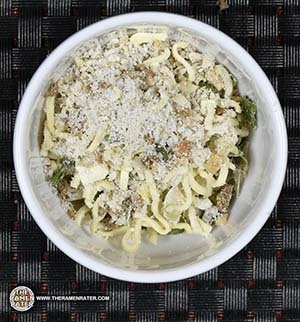 Loose seasoning from the cup. 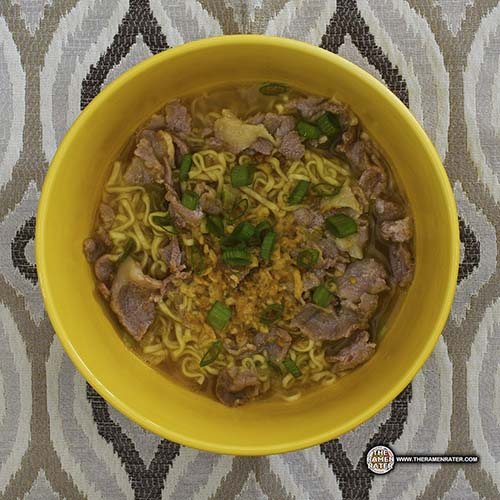 Finished (click to enlarge). Added pork, fried garlic, Salad Cosmo mung bean sprouts and spring onion. The noodles are plentiful and pretty good. The broth has a very deep kind of beef pork and other things kind of taste; a melange if you will. It all comes together in a way I only know as Filipino as Lots of garlic taste and a chicharrone taste as well. I’ve had many Filipino instant noodle varieties – however, I haven’t ever had Filipino food – something I definitely need to do. 3.5 out of 5.0 stars. EAN bar code 4800016552076.

A TV commercial for this product