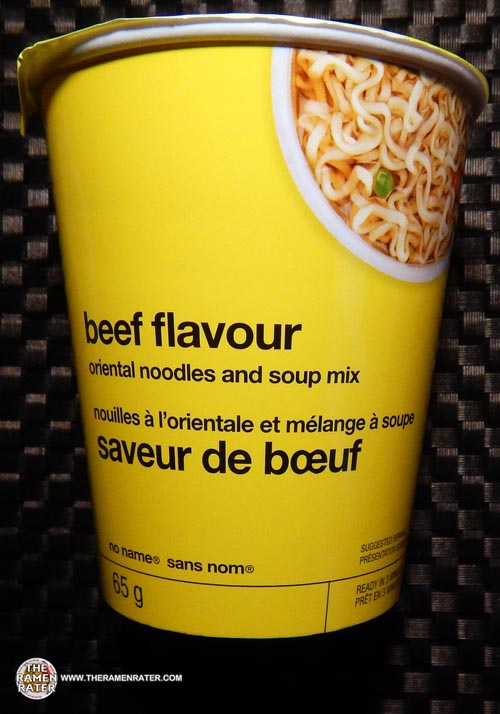 Here’s one I got from Justin M. from Winfield, BC up north of here in Canada! Thanks! This one’s rather fascinating to me as the brand name is literally ‘no name.’ It’s made in China for Loblaw’s, a Canadian grocery store chain. I’m crossing my fingers here; Canadian instant noodles haven’t really been my favorites – but this is a new one so we’ll have to see. With an open mind, let’s delve into No Name Beef Flavour Oriental Noodles And Soup Mix!

Detail from the side panels (click image to enlarge). Looks to be meat free but check for yourself. 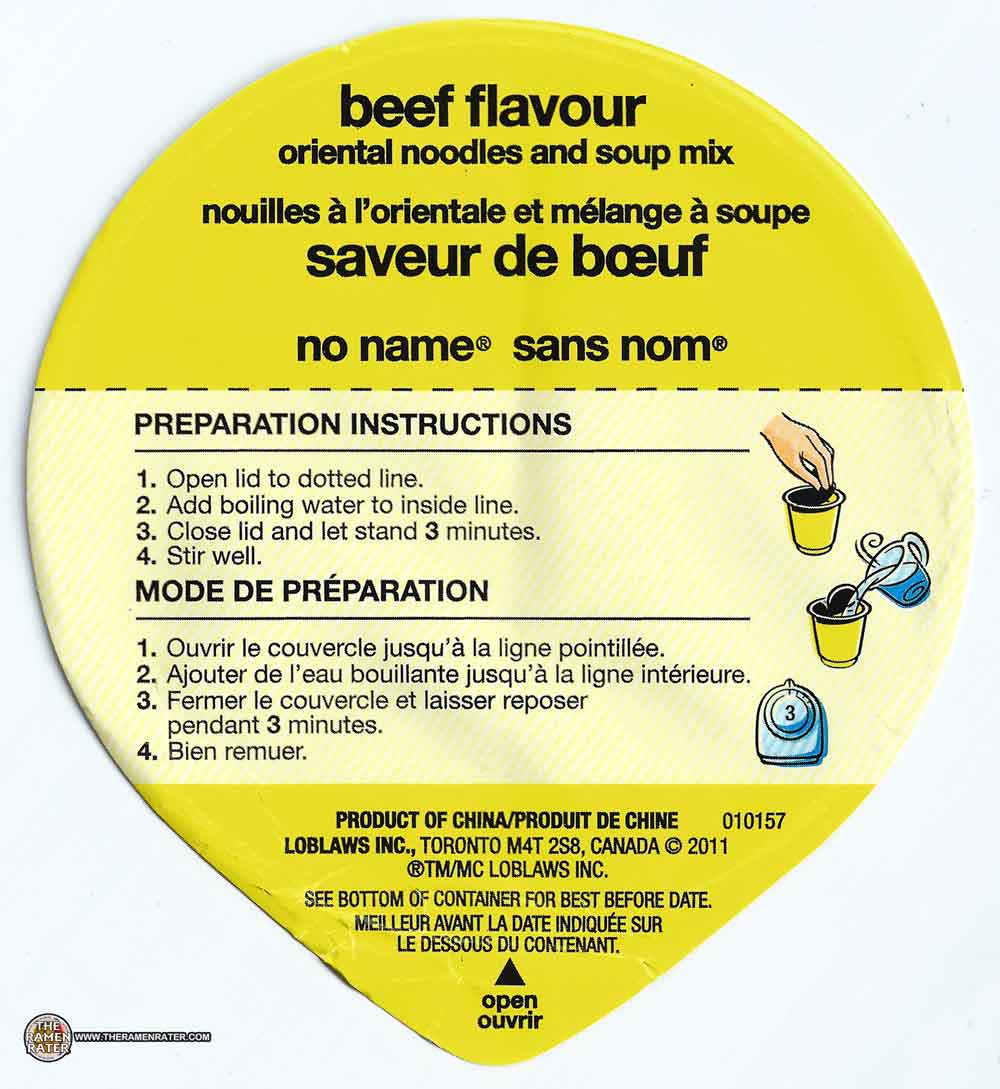 Detail of the lid (click image to enlarge). To prepare, open lid to dotted line, add in boiling water to inside line, close, wait 3 minutes and stir. Enjoy! But wait – I would add in the sachet contents before the water. No mention of it and I think it’d be rather difficult to chew through the packet. 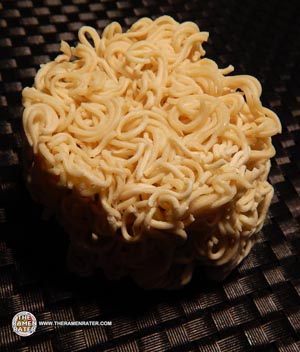 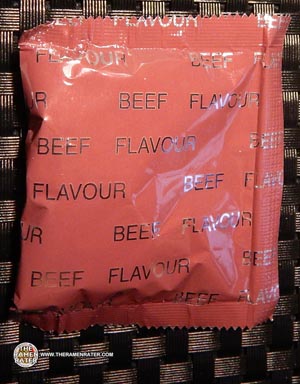 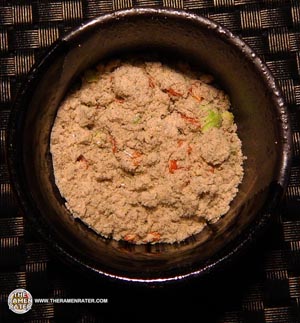 Has an interesting beef scent and a few pieces of dehydrated vegetables in there. 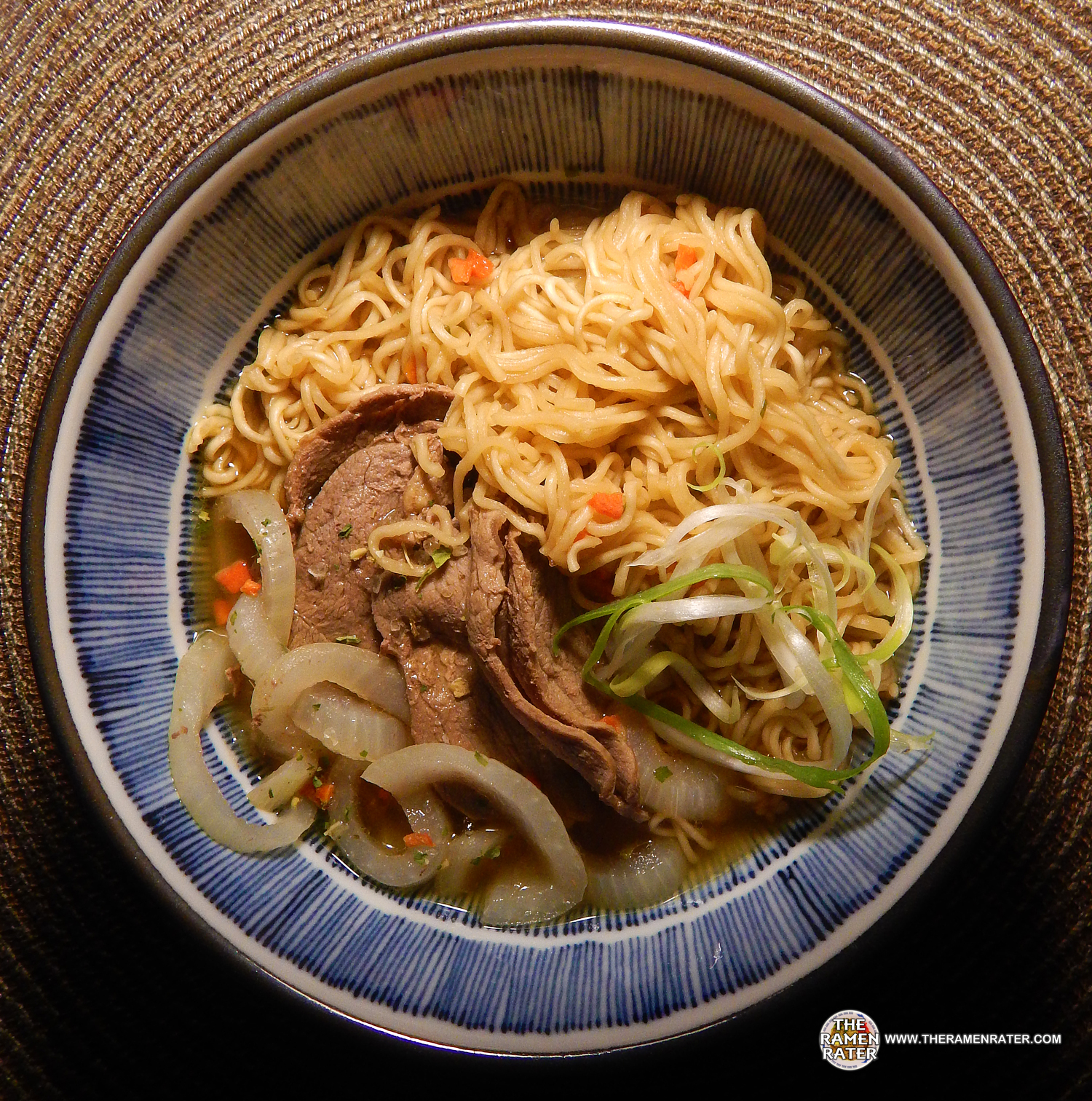 Finished (click image to enlarge). Added green onion, sweet onion, beef and a little ВКУСНАЯ СОЛЬ ЙОДИРОВАННАЯ (my sister got this stuff for me – it’s called ‘special iodized salt for the first course’ – I sprinkled a little on the beef). The noodles are kind of odd to be honest. On one hand, I find them to be mushy and funky, but on the other, they’re exactly like the noodles in Mrs. Grass’ soup, but instead of short, they’re long. The broth is pretty decent, with a beef flavor. It’s altogether very strange to me though; the texture of the noodle and the beef broth style of the soup; very different from most instant cups as well as very different from most store brand variants. Unfortunately, the issue with this one was in the vegetables. Everything was fine except the peas which has a very bitter and not enjoyable. 2.0 out of 5.0 stars. UPC bar code 060383049836.

This is awesome – William Shatner for frozen foods at Loblaw’s! This must be quite old!