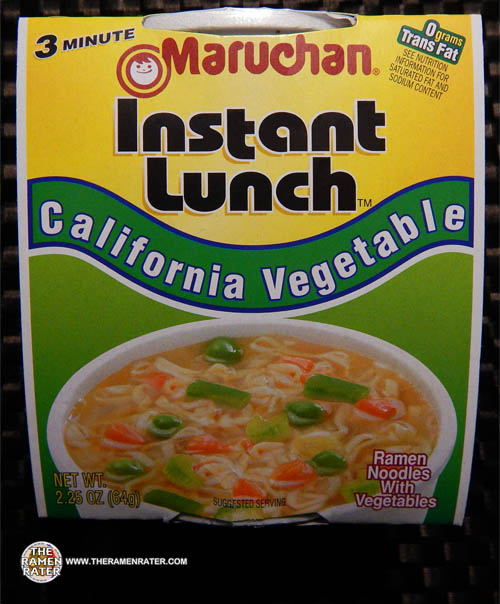 I want to send a special thank you to Craig Y. over at Maruchan for facilitating the process of getting Instant Lunch California Vegetable into my hands! Much appreciated! I hunted high and low for these and couldn’t find them! There are lots of products sold around the United States – and some do better in some areas than others. A good example would be the King Cake. Most people where I live don’t know what a King Cake is, however folks in Louisiana definitely do – it’s a special cake enjoyed around Mardi Gras. Here’s what Wikipedia has to say about King Cakes:

A king cake (sometimes rendered as kingcake, kings’ cake, king’s cake, or three kings cake) is a type of cake associated in a number of countries with the festival of Epiphany at the end of the Christmas season; in other places, it is associated with the pre-Lenten celebrations of Mardi Gras/Carnival.

What started out as a dry French bread type dough with sugar on top and a bean inside 30 years ago, is now a sweet, sugary and iced Danish type dough that is braided with cinnamon inside and a plastic doll underneath. King Cakes are made of a cinnamon filled dough in the shape of a hollow circle. They have a glazed topping and are sprinkled with colored sugar. Hundreds of thousands of King Cakes are eaten in New Orleans during the Carnival season.

The cake often has a small plastic baby (said to represent Baby Jesus) inside (or sometimes placed underneath), and the person who gets the piece of cake with the trinket has various privileges and obligations.[1]

A company that makes cakes would probably not focus their King Cake varieties in the northwest as it would make more sense to sell them in Louisiana, right? Well, when companies like Maruchan decide where to sell which varieties, it goes much more deep than that, but it’s the same kind of thing. One might say ‘but hey – you were looking for it; they should sell it where you’re at!’ Although that’s a nice thought, I only eat one of each variety usually, so my single Instant Lunch purchase probably wouldn’t sway the distribution of a large company. But thanks, hypothetical person! Anyways, let’s have a look at this interesting instant noodle cup! 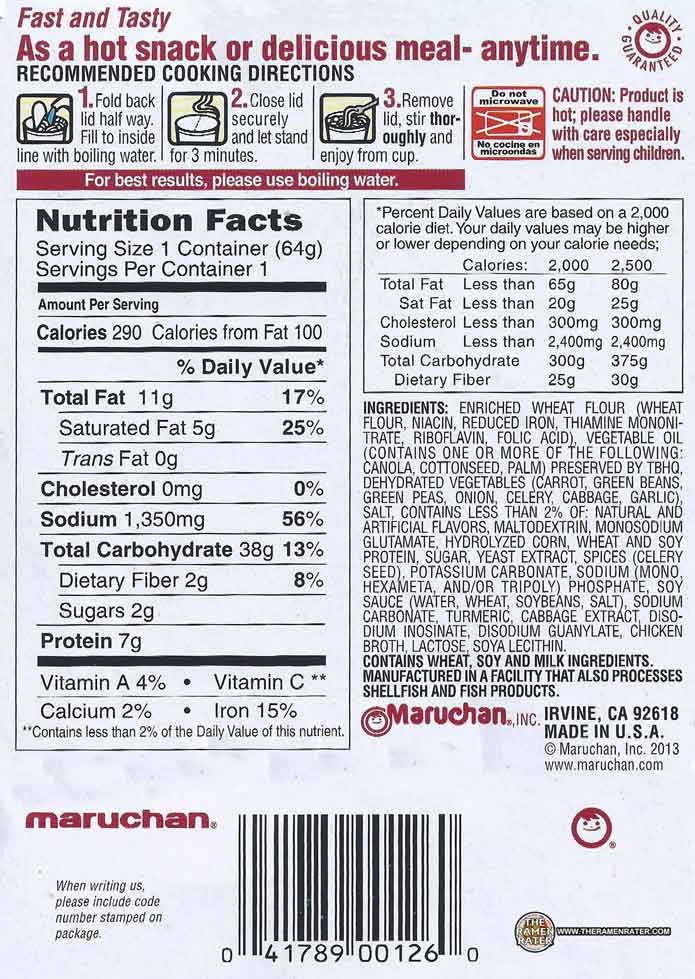 Here’s the back of the cardboard outer (click image to enlargContains chicken broth. To prepare, open lid halfway and add boiling water to fill line. Cover and let steep for 3 minutes and stir. Enjoy! One thing though – a LOT of people like to mention to me that they microwave these things. No! If you add water and microwave, you’re doing it wrong. If you want to include a microwave in you noodle-preparation doings, just take a cup and add water and heat that, then add it to the cup. This has been a public service announcement from The Ramen Rater – helping you correctly prepare your instant noodles since 2002. 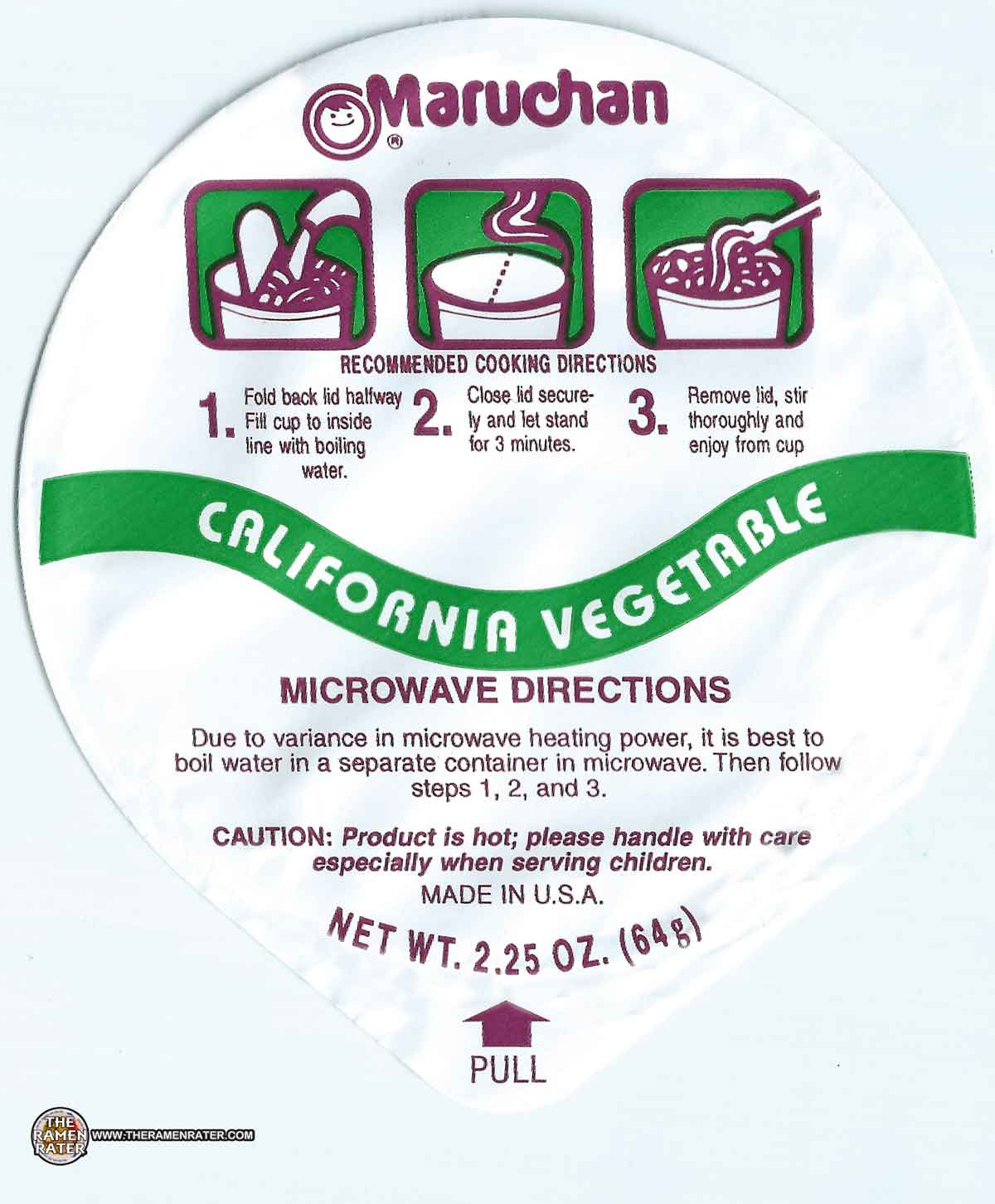 Here’s detail from the lid (click image to enlarge). Notice what it says here – boil the water in a separate container! Also, don’t give it to little kids – you wouldn’t give a toddler a latte from Starbucks, would you? It’s hot stuff – use common sense! 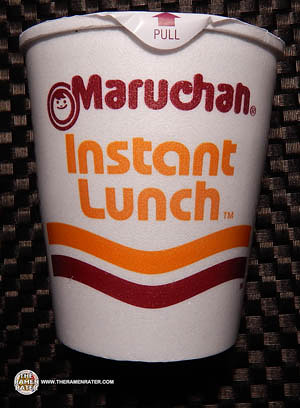 The cup, exposed from the cardboard outer. 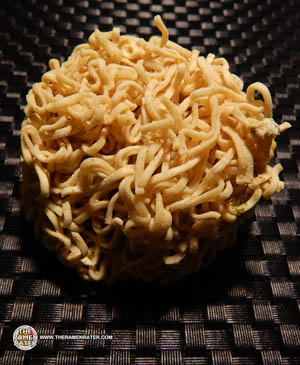 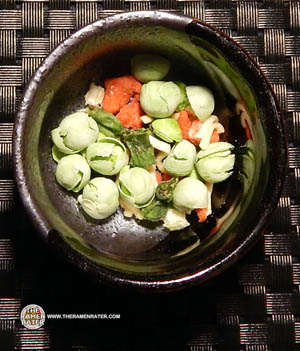 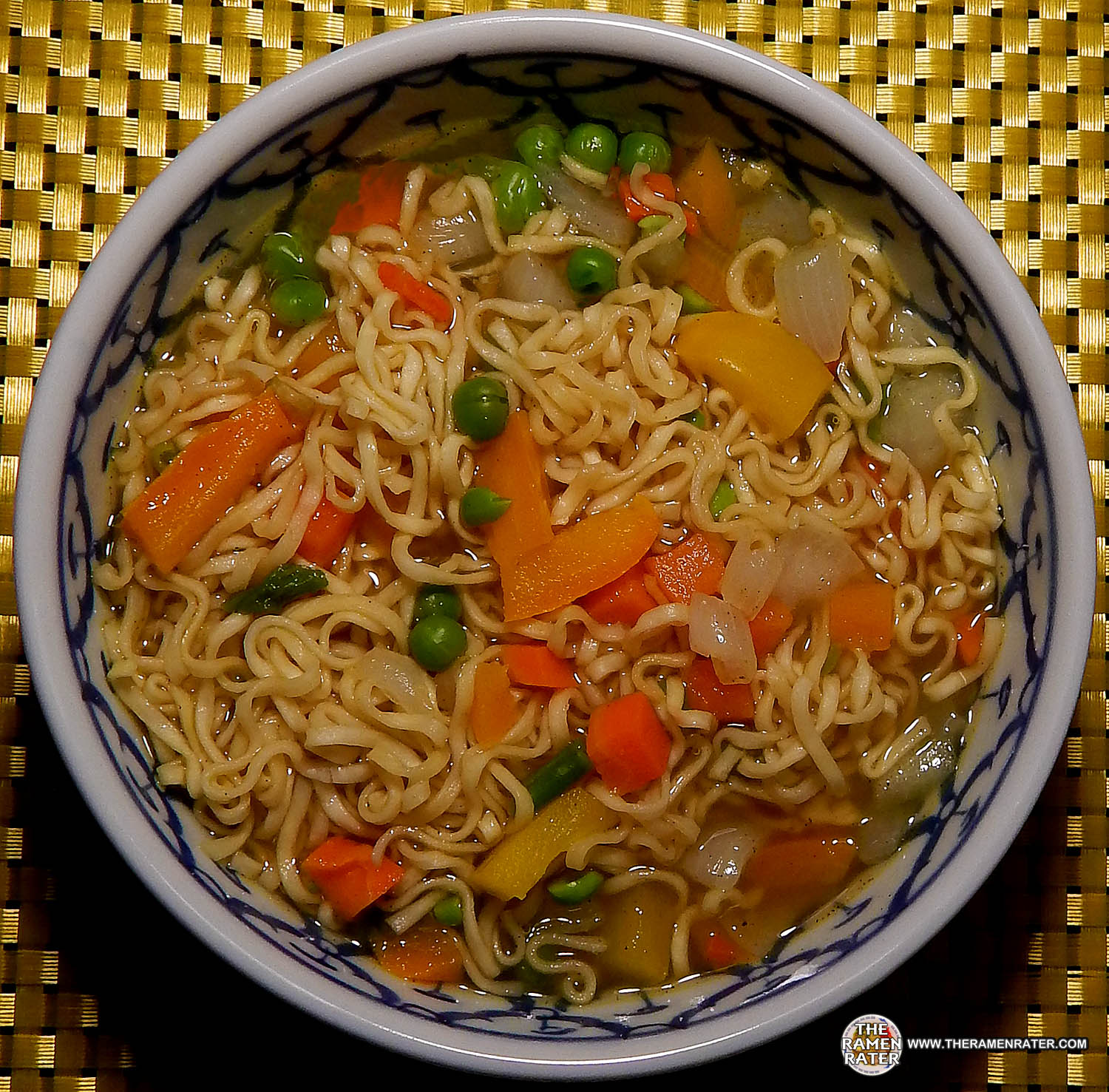 Finished (click image to enlarge). Added sweet onion, bell pepper and peas. The noodles are flat and narrow. They hydrated perfectly and didn’t have any inkling of sponginess. The broth is that of a vegetable flavor; kind of a melange that I think most familiar with prepared and processed foods would sum up as ‘garden vegetable.’ The supplied veggies hydrated extremely well – especially the peas, which often can go one way or the other – these were just right. 3.5 out of 5.0 stars. UPC bar code 041789001260.

You can find Maruchan Instant Lunch California Vegetable on Amazon!

Here’s a video showing how to do up a fusion recipe with Maruchan’s Roast Chicken Yakisoba.