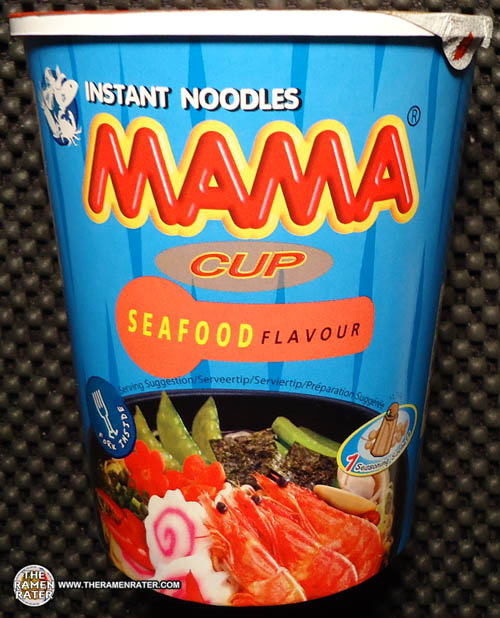 My nose is running, my throat is sore and I feel pretty crummy. Sneezing, sore eyes and sore everything – I’ve got a cold and a bad one at that. Not a fun day, that’s for sure – it’s raining and windy outside as well which makes taking our dogs out a real chore, especially when they’re pugs. Pugs don’t like to get wet; they (at least the pugs we have) aren’t very rugged creatures; they like to sleep and be constantly comfortable. 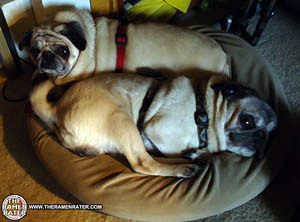 Here’s what they’re doing right now. Now they’re back to sleep. Professional nap takers. Anyways, I’m sick and the dogs are sleeping. I thought maybe some spicy seafood noodles would be nice – especially since I’m in the mood for some seafood. Spicy things usually make me feel better. Let’s check out this cup from MAMA and let the dogs sleep. 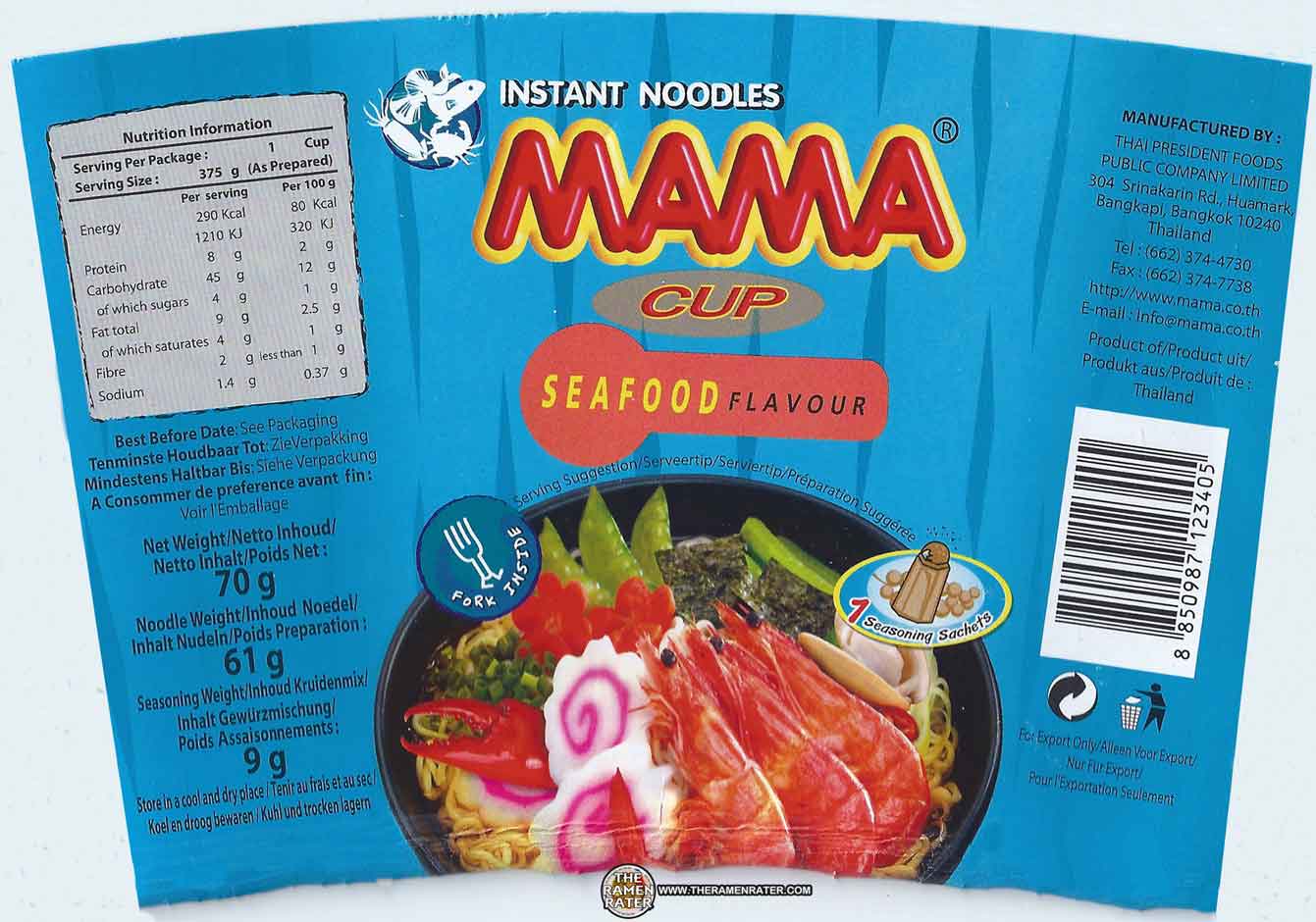 Details of the side panels (click image to enlarge). 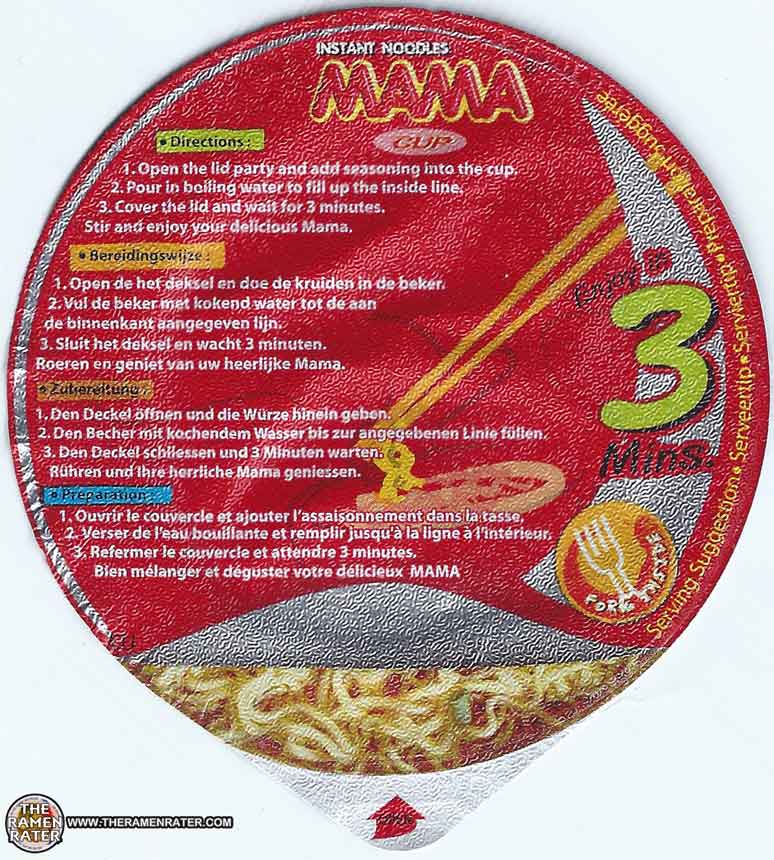 Detail of the lid (click image to enlarge). To prepare, open lid, add seasoning, add boiling water to line for 3 minutes. Stir it up and then (yes it says this) “enjoy your delicious MAMA.”

The miraculous included fork! A fitting three-tined trident to harpoon the seafood noodles. 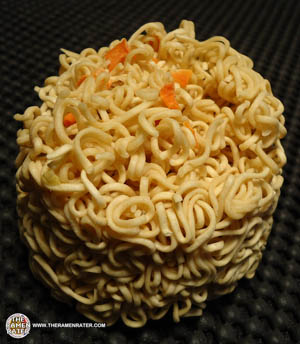 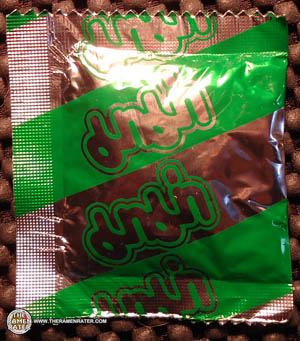 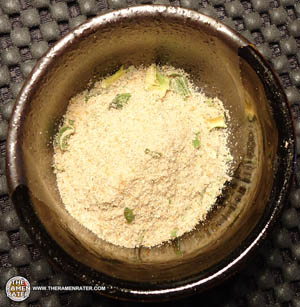 A granular powder with little bits of vegetable within. 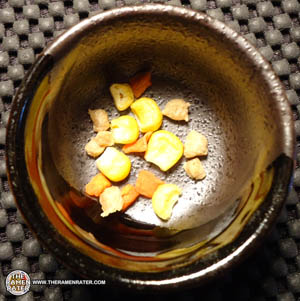 Corn and carrot bits from inside the cup.

Finished (click image to enlarge). Added fish balls, chikwara, shrimp, kamaboko, shitaraba, sweet onion and BonCabe Level 10 chilli seasoning. The noodles are quite good – in fact they’re about the same as the pack varieties by MAMA. The broth has a nice and rich seafood flavor which was quite good, although it wasn’t spicy whatsoever. It didn’t say that it was spicy in the first place, but usually if it’s Thai and by MAMA, it’s spicy – at least a little bit. The vegetables hydrated well but could’ve been better. A very nice seafood cup. 3.75 out of 5.0 stars. UPC bar code 8850987123405.