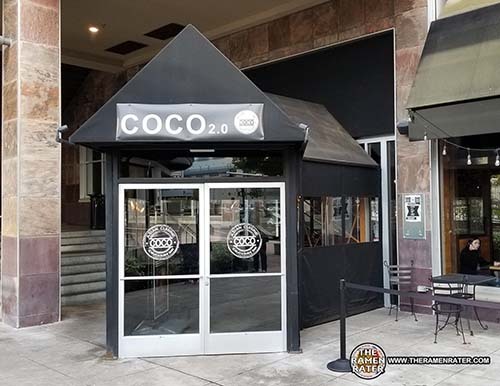 Amazingly, we were able to get two weekends in a row with some time for us to go out together without the kiddos (thanks, Aunt Cindy!). I said ‘hey you wanna try some more ramen?’ Kit was up for it and so we checked this place out. But it turned out that although they did have ramen, this was clearly a Korean restaurant in the middle of Bellevue. I thought ordering a Japanese dish at a Korean restaurant just seemed a little off, so I went in for something I’ve been wanting to try for a long time – only had it in instant varieties thus far, so time to try the real thing. Let’s go! 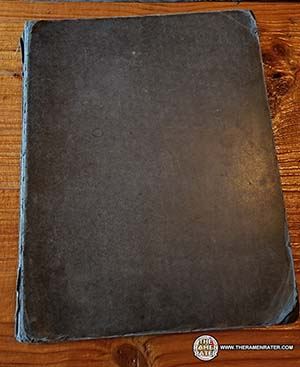 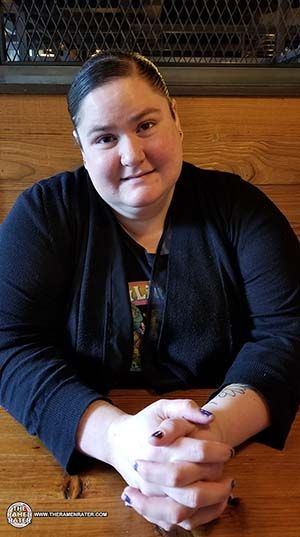 My awesome wife Kit. Before we went here, we went to a car wash and vacuumed out the minivan. Yes, we roll in a minivan – we have two kids. We actually really like it a lot. But after many trips to Canada with the kids and passing back snacks to toddlers in the back seat, something had to be done about the sea of crumbs on the floor. An odd way to start our little romantic outing I’ll admit, but definitely nice to have a clean ride again!

I saw this one their online menu and thought to myself ‘finally.’ We’ve been out for Korean food many times, but never seen Budae Jjigae on the menu.

So as far as the ambiance of the place. It was pretty loud, despite not many being there. Blasting some rap (explicit versions) kind of made it a definite no-go for the label ‘family restaurant,’ and I think this place is probably pretty insane on a Friday night. 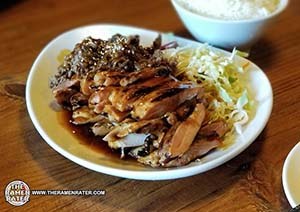 Kit ordered some beef and chicken teriyaki, which was the first to arrive at the table. Really good! 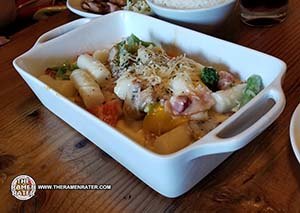 We were both elated to see the inclusion of cream cheese tteokbokki on the menu. We used to frequent a little restaurant in Lynnwood called Chi Mc ‘n Hot Pot which had Korean bar food – and they had this dish. This one was more of a carbonara styled version whereas the original was with crabmeat. 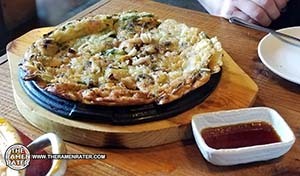 Another favorite of our was the seafood pancake – always something worth getting. At this point I noticed something. No banchan. Where’s the banchan?! What’s banchan? Well, when you go out for Korean food usually you are presented with an array of little dishes with little things little kimchi, pickled radish, marinated vegetables, etc. Usually about eight or so of them. Not here. 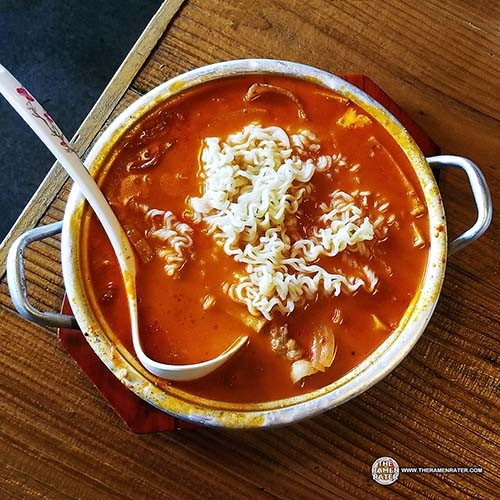 Holy moly (click to enlarge). Wow – this looks fascinating. The ramyun noodle was just right – thick and chewy. Broth was strong but had that smack of bitter aftertaste I generally am not a big fan of. Heat level was on point – very strong and spicy. While the menu mentioned cheese, I really didn’t detect any, which was a little disappointing. But the sheer amount of different inclusions in here was just amazing and wonderful. Kimchi was great, soft tofu, salami, SPAM, – it goes on and on. No macaroni or beans however, which I has expected from the instants I’ve had. Long story short, this was quite good and definitely recommended. 3.75 out of 5.0 stars.

Let’s delve into what budae jjigae is. 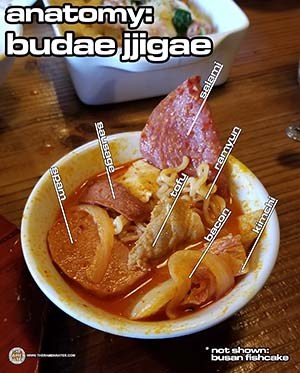 Okay (click to enlarge) so budae jjigae translates to ‘troop stew.’ After the Korean War, US Troops left behind lots of the foods that they had brought. Some including pork and beans, SPAM, sausage – basically things that would last a long time. Well, the Koreans incorporated them into this dish. 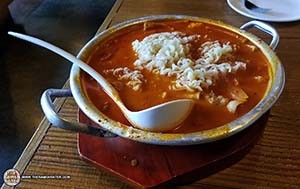 A side shot of the bowl (click to enlarge). Did I eat it all? Oh God no – this was a lot of food!