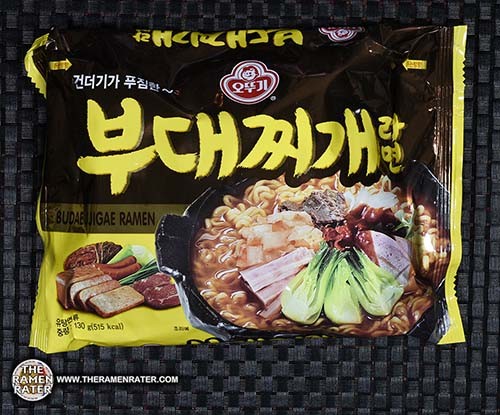 The first time I’d heard about Budae Jigae instant noodles was when I read an article in my nes feed about this brand making one. So what is budae jjigae? Let’s have a look at this from Wikipedia –

Budae-jjigae (부대찌개; literally “army base stew”) or sausage stew is a type of jjigae (stew), made with ham, sausage, baked beans, and kimchi.[1] The dish was created shortly after the armistice that ended the Korean War, using the scrounged or smuggled surplus foods from the U. S. army bases.[2] Although the dish was born in the period of post-war impoverishment, it continued to be popular during the period of rapid growth, and is still popular today. There are many restaurants specializing in budae-jjigae; the most famous ones on the budae-jjigae street in Uijeongbu, where the dish was first made. The dish is now a popular anju (accompaniment to alcoholic drinks) and a lunch item in college neighborhoods.[3][2]

Budae (부대) is a military unit, often a “troop”. As a troop’s camp is also called budae, the word gun budae (군부대; “military camp”) is often used to refer to military camps in general, and migun budae (미군부대; “U. S. military camp”) to the U.S. military bases. Jjigae (찌개), often translated into “stew”, means a soup thicker than guk (soup).

After the Korean War, food was scarce in South Korea. People dwelling around U. S. army bases, in the Uijeongbu, Pyeongtaek, and Munsan areas made use of surplus foods from army bases, commonly processed meat products, collectively known as budae–gogi (부대고기; “army base meat”), such as ham, hot dogs, and Spam, along with canned baked beans.[4][5] It is said that budae-jjigae begun as a buttery stir-fried snack made of sausages, ham, cabbages and onions to accompany makgeolli (rice wine), but later on, anchovy broth flavored with gochujang and kimchi was added to create the stew that is enjoyed today.[4] The stew was also referred to as Jonseun-tang (존슨탕; “Johnson soup”), Johnson being the U. S. President Lyndon B. Johnson, who is said to have raved about the taste of the dish amid his visit to Korea.[6] The ingredients were often scrounged or smuggled through a black market, as American products were not legally accessible to Koreans.[2] During the military dictatorship of Park Chung-hee, the fact that Spam smuggling was an offense punishable by death made budae-jjigae even popular as an “intriguing” dish with illegal ingredients.

Budae-jjigae is still popular in South Korea. Common ingredients now include: Vienna sausage, bacon, tofu, pork, ground beef, instant noodles, macaroni, tteok (rice cake), American cheese, mozzarella, water-dropworts, scallions, chili peppers, garlic, mushrooms, and other vegetables in season.[7] The city of Uijeongbu, which is bordered by Seoul to the south and has many army bases, is famous for its budae-jjigae. In the late 20th century, the city of Uijeongbu stipulated that the dish be referred to as Uijeongbu-jjigae to remove the military or war-time connotation in the name, though not many restaurants follow this guideline. Some restaurants have begun calling their product Uijeongbu-budae-jjigae. There is also what locals refer to as “Uijeongbu Budae-jjigae Street” where there is a high concentration of buddae-jjigae restaurants.[8][9]

Just fascinating stuff! I really like when I find the history of a dish when it has really interesting origins. Let’s check out this budae jjigae from Ottogi. 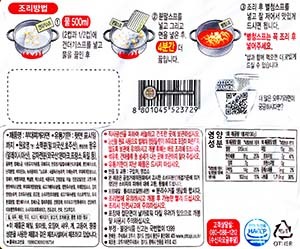 Here’s the back of the package (click to enlarge). Unsure whether it contains meat but it looks like it does. To prepare, add noodle block and garnish sachet to 500ml boiling water and cook for 4 minutes. Add in liquid base sachet. Finally, stir and enjoy! 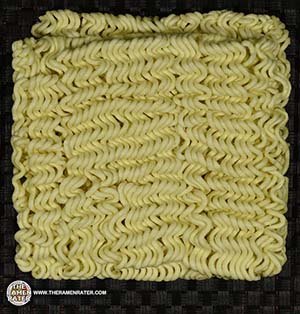 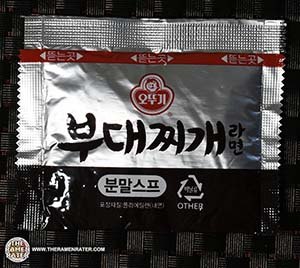 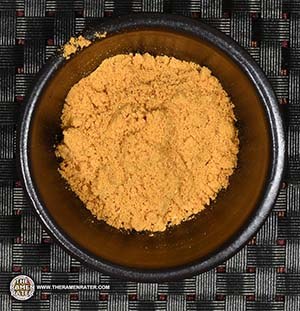 A slightly fluffy powder base. 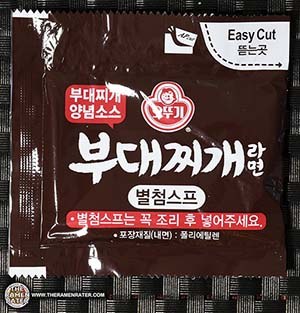 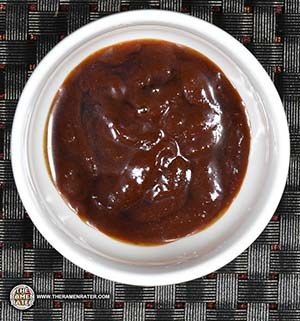 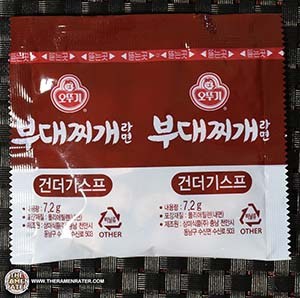 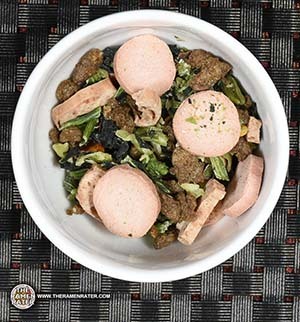 Slices of hot dog among other things. 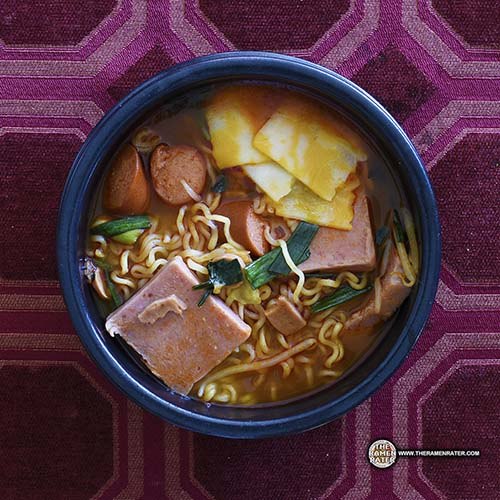 A great recipe for a homemade version