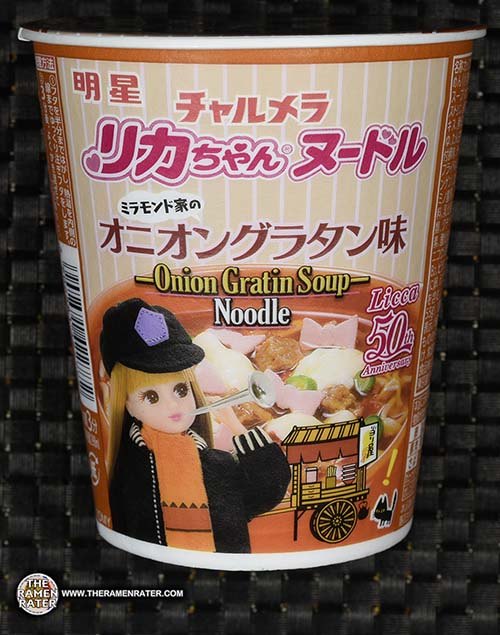 icca-chan (リカちゃん Rika-chan), full name Licca Kayama (香山リカ Kayama Rika),[1] is a dress-up doll series introduced in Japan on 1967-07-04 by Takara,[1][2] enjoying the same kind of popularity in Japan as the Barbie series does in the United States.[3] The Licca-chan dolls tend toward a more Japanese body as far as height and features. Takara had sold over 48 million Licca-chan dolls as of 2002,[1] and over 53 million as of 2007.[3] Licca-chan was created by former shōjo manga artist, Miyako Maki, who is also the wife of Leiji Matsumoto.

Takara has provided an extensive background story for the Licca-chan doll, including an age (11), where she attends school, names and occupations for her parents, and her favorite books (Anne of Green Gables and A Little Princess). Licca-chan also likes Doraemon.[1]

Rough Trade Records teamed up with Takara in the late 90’s to release “Street Licca”, who was a DJ that carried a Rough Trade record satchel, and mini, doll-sized LPs from the labels’ artists. Along with her Ursula 1000, Gants and Spearmint records, she toted a pair of pink Converse running shoes, grey “leather” pants, headphones, layered hoody and a blond bob haircut. Street Licca was the ultimate “indie rock” doll.

In 2001, a pregnant adult version of Licca-chan was introduced which included a postcard the purchaser could send to Takara for a baby doll. The baby came with a key which allowed the doll to be returned to its standard proportions.[1][4] The release of the doll happened to coincide with the birth of Aiko, the daughter of Crown Prince Naruhito and Crown Princess Masako of Japan, a factor which helped boost the sales of the new doll.[4] Since then, other versions of Licca-chan have been introduced, including a new “Departure Licca”, released just ahead of the 40th anniversary in 2007.[3]

OK so kind of like a Japanese Barbie doll I suppose. Plus it’s the 50th anniversary of it’s inception. Okay – let’s check out this onion noodle.

Detail of the side panels (click to enlarge). Contains fish. To prepare, add 290ml boiling water and cover for 3 minutes. Finally, stir and enjoy! 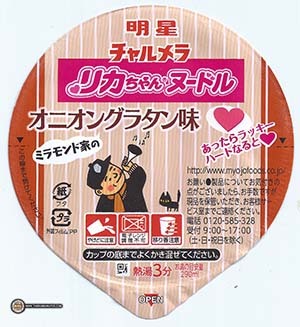 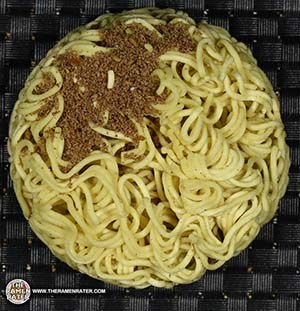 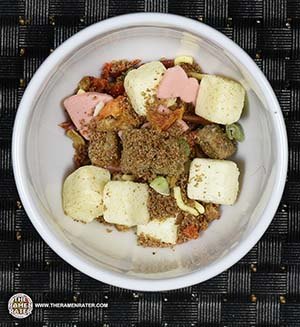 Some loose garnish from the cup. 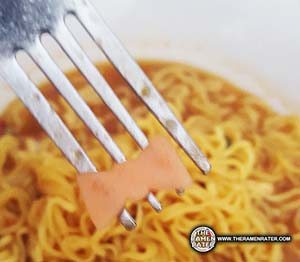 A fishcake bow. Only found one of these. 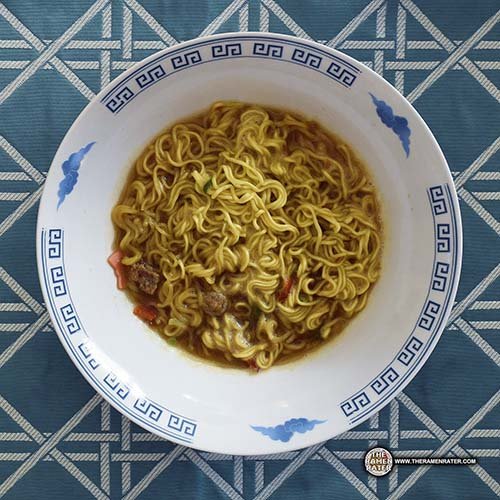 Finished (click to enlarge). The noodles actually were quite good – soft and plentiful. The broth is a very rich and onion flavored affair with lots of add-ons including a bow made of fishcake and little bits of meat as well as some vegetable.  Very rich and satisfying. 4.25 out of 5.0 stars. JAN bar code 4902881422772.

Commercials for this character over the years