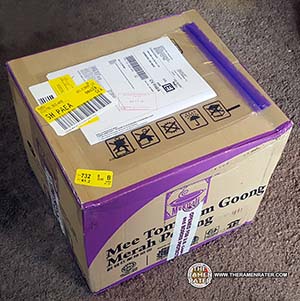 Hooray a new box of MyKuali samples! I’ve been a big fan of their products ever since they released their Penang White Curry way back in 2013 I believe. Since then, they appeared on my top Ten Spiciest list and then my Top Ten annual. They’re known nowadays worldwide as something unique and different. Let’s see what’s in this package! 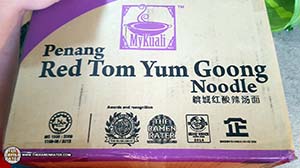 Hey look – The Ramen Rater stamp of approval on the box (click to enlarge)!

The evil tape (click to enlarge). Well, I shouldn’t say evil, but I’ve gotten empty boxes before when they decide to destroy some packs that have a microscopic amount ofof chicken or beef powder… 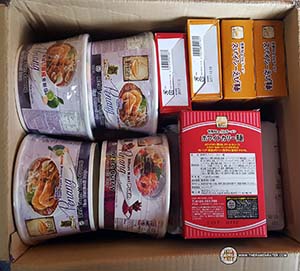 Under the lid (click to enlarge). Let’s check everything out in detail. 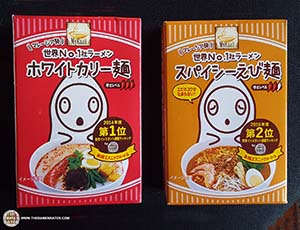 These are awesome (click to enlarge)! So companies will make different package designs for different countries. These are little boxes for Japan. We have MyKuali Penang White Curry on the left and MyKuali Hokkien Prawn on the right. 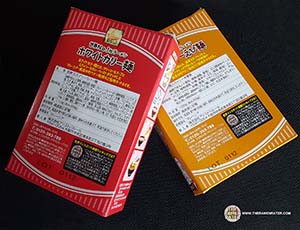 So here’s the back of the little boxes (click to enlarge). Obviously they’re pretty happy about making the #1 and #2 spots on my lists! 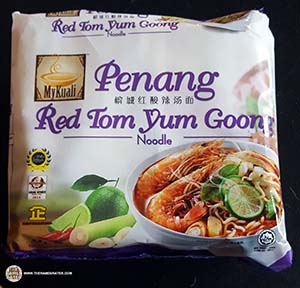 MyKuali’s Penang Red Tom Yum (click to enlarge) was #1 on my 2015 Top Ten annual. So this style packaging is for the Singaporean market. This one has a styrong shrimp and spicy taste with lemongrass. 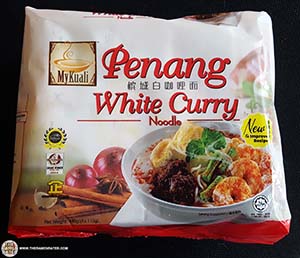 Here’s the famous Penang White Curry (click to enlarge) – #1 on 2014. It’s kind of hard to describe this one’s taste. Indeed it has a spicy element but then this curry which I think can only be explained as Malaysian. 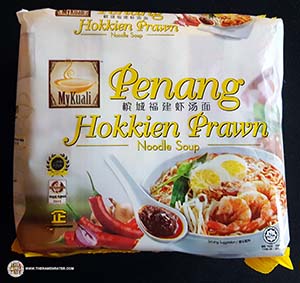 Here we have the MyKuali Hokkien Prawn (click to enlarge), which hit #2 on the 2016 Top Ten annual list. So this one has a really strong sweet prawn taste to it and really nice crunchy fried onion. 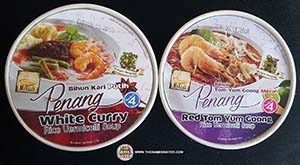 These actually are the ones I’ve been waiting for (click to enlarge). So these are rice vermicelli versions of the Penang White Curry and Penang Tom Yum varieties. In conclusion, I’m really looking forward to reviewing all of these! Thank you very, very much!