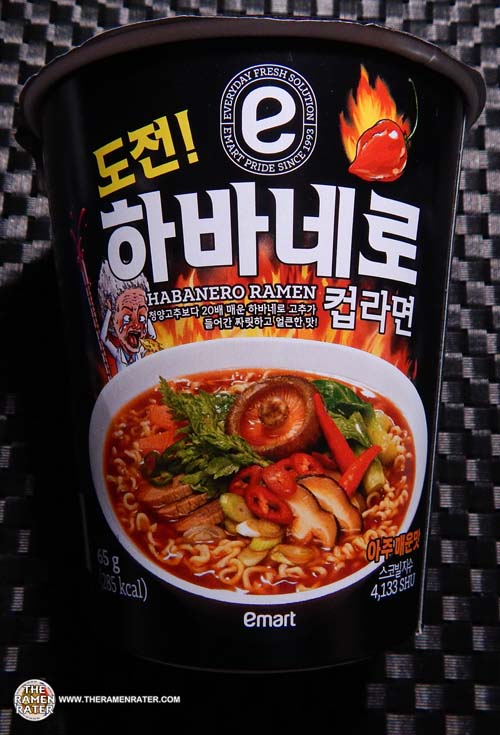 This was sent to me by Anders E. from South Korea – thank you very much! For some time new, eMart’s Dare You! Habanero Ramen has topped The Ramen Rater’s Spiciest Instant Noodle Of All Time lists. There’s a really good reason for this too – it’s violently hot. Heat is measure in SHU – Scoville Heat Units. Here’s what wikipedia has to say about the Scoville test:

The Scoville scale is the measurement of the pungency (spicy heat) of chili peppers or other spicy foods as reported in Scoville heat units (SHU),[1] a function of capsaicin concentration. The scale is named after its creator, American pharmacistWilbur Scoville. His method, devised in 1912, is known as the Scoville Organoleptic Test.[2] Unlike methods based on high-performance liquid chromatography, the Scoville scale is an empirical measurement dependent on the capsaicin sensitivity of testers and so is not a precise or accurate method to measurecapsaicinoid concentration. In Scoville’s method, an exact weight of dried pepper is dissolved in alcohol to extract the heat components (capsinoids), then diluted in a solution of sugar water.[3][4][5] Increasing concentrations of the extracted capsinoids are given to a panel of five trained tasters, until a majority (at least three) can detect the heat in a dilution.[4][5][6] The heat level is based on this dilution, rated in multiples of 100 SHU.[4] A weakness of the Scoville Organoleptic Test is its imprecision due to human subjectivity, depending on the taster’s palate and their number of mouth heat receptors, which varies “greatly” among people.[6]Another weakness issensory fatigue:[6] the palate is quickly desensitised to capsaicins after tasting a few samples within a short-time period.[4] Results vary widely, ± 50%, between laboratories.[5]

So basically, you could have a panel of people who really can’t handle hot spicy stuff and get a higher Scoville score. It’s kind of a surprise that it’s really been decided as the ipso-facto spiciness method. I’ll say though that as a hot sauce afficionado (I’ve reviewed over 250 and made my own), this is definitely the hottest one I’ve come across yet. Let’s have a look at eMart’s Dare You! Habanero Ramen. 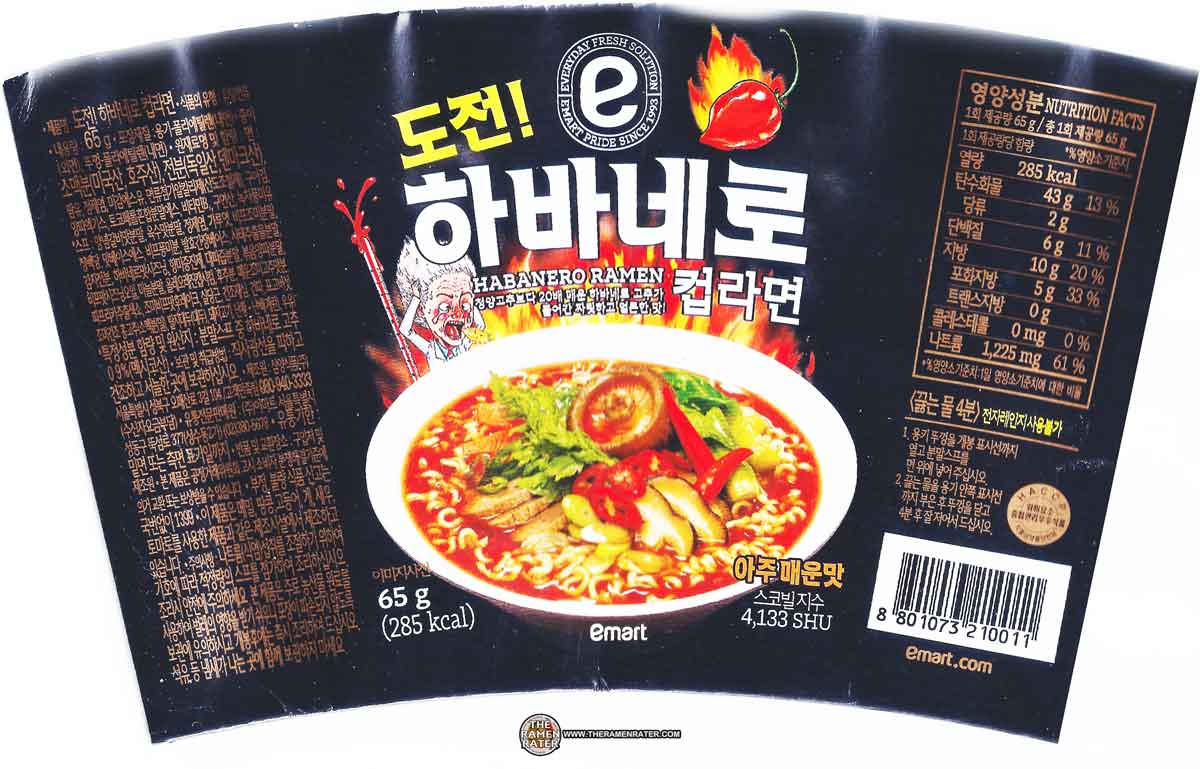 Detail of the side panels (click image to enlarge). Not sure if it contains beef. To prepare, empty included sachet into cup and add boiling water to fill line. Steep for 3 minutes, stir and enjoy! 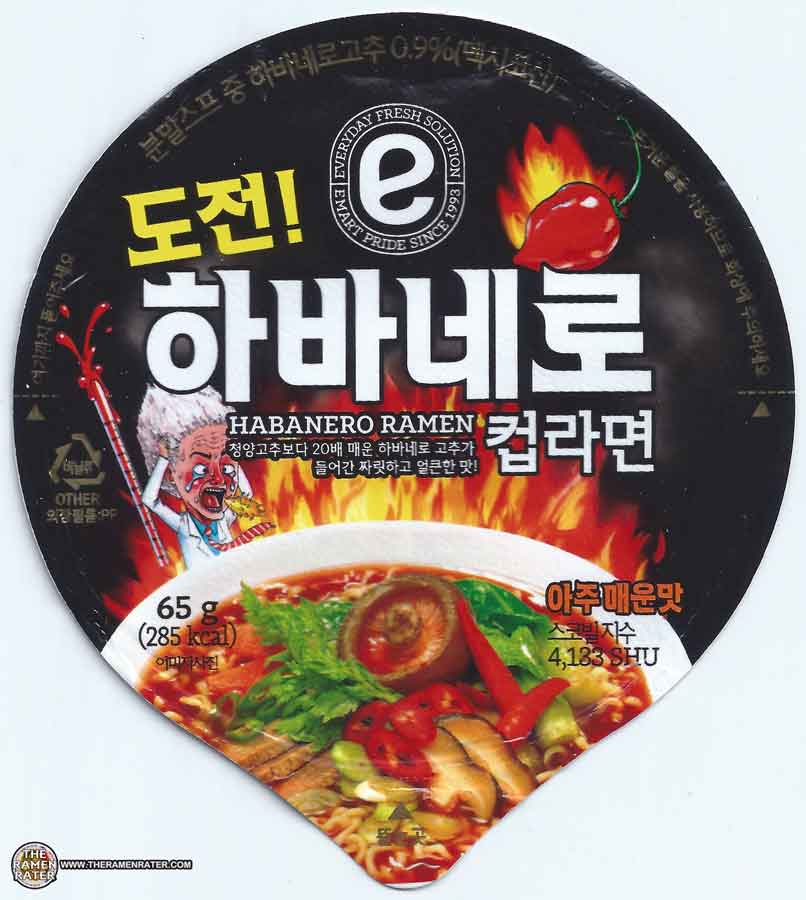 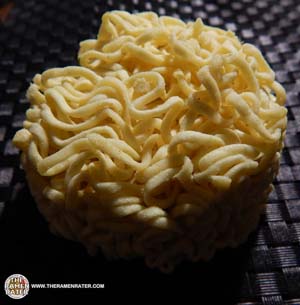 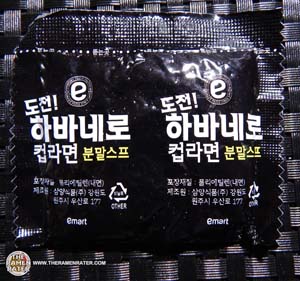 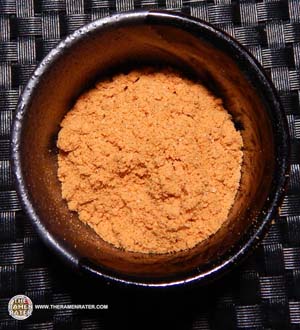 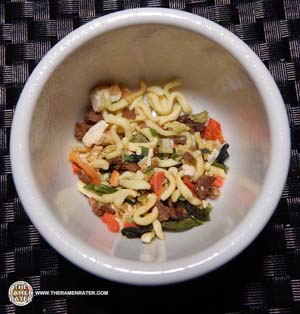 Some vegetables from the bottom of the cup. 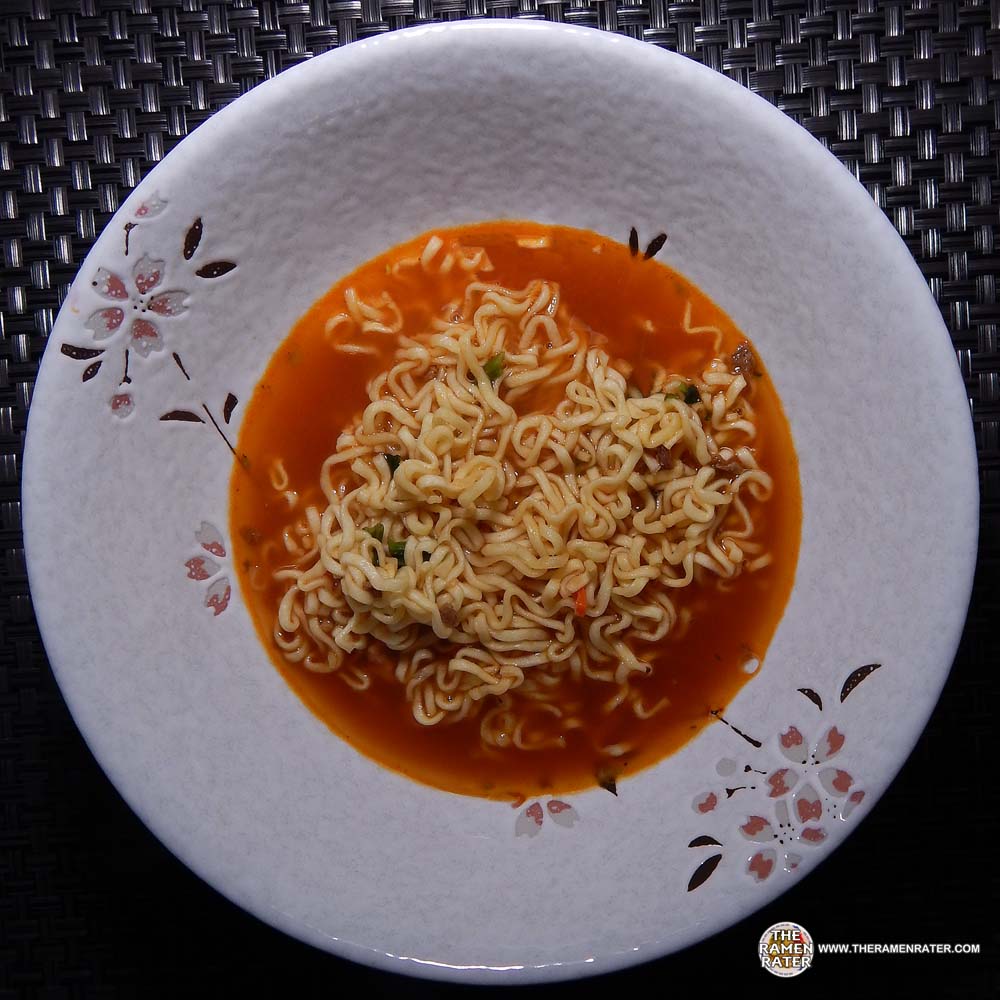 Finished (click image to enlarge). The noodles hydrated well enough and had that big and thick ramyun gauge. The broth was definitely nowhere neat as spicy as the packaged version, whose heat can peel the think off of your brain. It is quite hot though and has a good flavor to it. 3.5 out of 5.0 stars. EAN bar code 8801073210011.

Want to feel your mouth catch on fire? Like using a charcoal briquet as a lozenge? You’ve been warned – get it here!!

I did an interview for O’Live TV via Skype in 2013 that was all about the spiciest instant noodles. They ended up using it as part of a teaser for the show’s first episode.