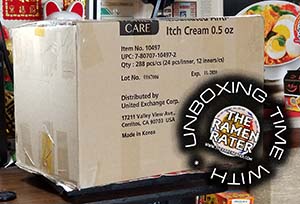 Here’s a special one! Got contacted by a company about some fancy new bowls with a familiar flavor. See, I’ve been reviewing instant noodles for a long time, but there was a gap of about 5 years in the middle where I reviewed hot sauces. Tapatio is a popular hot sauce here in the United States – so I’m sure you’ll be excited to see this one!

This one isn’t currently available, but they did do a demo last weekend in California at some grocery stores, so maybe they will again soon. Keep an eye out! As soon as they’re on the market I’ll be releasing some reviews! Probably a spicy noodle mukbang video as well!Thank you to thew nice folks at UEC for sending these over!

Tapatío is a hot sauce, produced in Vernon, California, that can be found at many supermarkets, pharmacies, and liquor stores in the United States.

The ingredients, as listed on the product label, are water, red peppers, salt, spices, garlic, acetic acid, xanthan gum and sodium benzoate as a preservative. Tapatío comes in five sizes: 5, 10, and 32 fluid ounces, and 1 gallon (3.785 liters), as well as in 7-gram packets. The sauce overall has a Scoville rating of 3,000, hotter than Sriracha. [1]

The Tapatío Hot Sauce company was started in 1971 by Jose-Luis Saavedra, Sr., in a 750-square-foot (70 m2) warehouse in Maywood, California.[6] In 1985, the company moved to a 8,500-square-foot (790 m2) facility in Vernon, California, 5 miles (8.0 km) from Downtown Los Angeles. Although larger than the first location, the new factory had a single loading dock and limited storage space, which created a new series of problems for the company. After a long search, a site was found for a developer to custom-build a new 30,000-square-foot (2,800 m2) facility, which Tapatío presently occupies. The new factory has several loading docks and automated production.