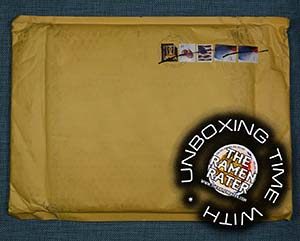 Today a combo – an unboxing and a book review!

I heard about this book a while back. They emailed me and mentioned The Discovery Of Ramen was on Kickstarter. I thought hey – I would like to check out a kid’s book on ramen – so I did a post about it. That was months ago and they’d said they would send me a copy once it came out. Well, they did! I should note I did the video before reading the book – here are my thoughts on it.

The Discovery Of Ramen is definitely a kid’s book. It’s basic enough that a kid can grasp a lot of the concepts within. I like how it goes on a whimsical trip through time (and space) teaching about the history of noodles all the way from early China. They also touch on instant noodles and how Momofuku Ando originally was from Taiwan which I found a realistic touch.

So it’s two kids and a panda named Dao that tells them all about ramen through the ages as well as how it’s made, ingredients, garnish and broths. I will say I disagree with the boy who is not interested in the pizza instant noodle concept but to each their own.

As far as the illustration, it’s pretty neat. Very colorful and inventive. I really liked the picture of Momofuku Ando with a crown on his head as the king of instant noodles.

I would say if your kid is into Asian food, they’ll probably like this book a lot. I haven’t read it to my children as of yet (to be honest, Miles won’t sit still long enough for a book or will try to destroy it before the first page is read), but when they’re ready, I certainly will. I think Miriam might be a little more receptive lol!

Thanks to Immedium for sending this along – by the way you can get your own copy below via Amazon:

The Discovery of Ramen: The Asian Hall of Fame